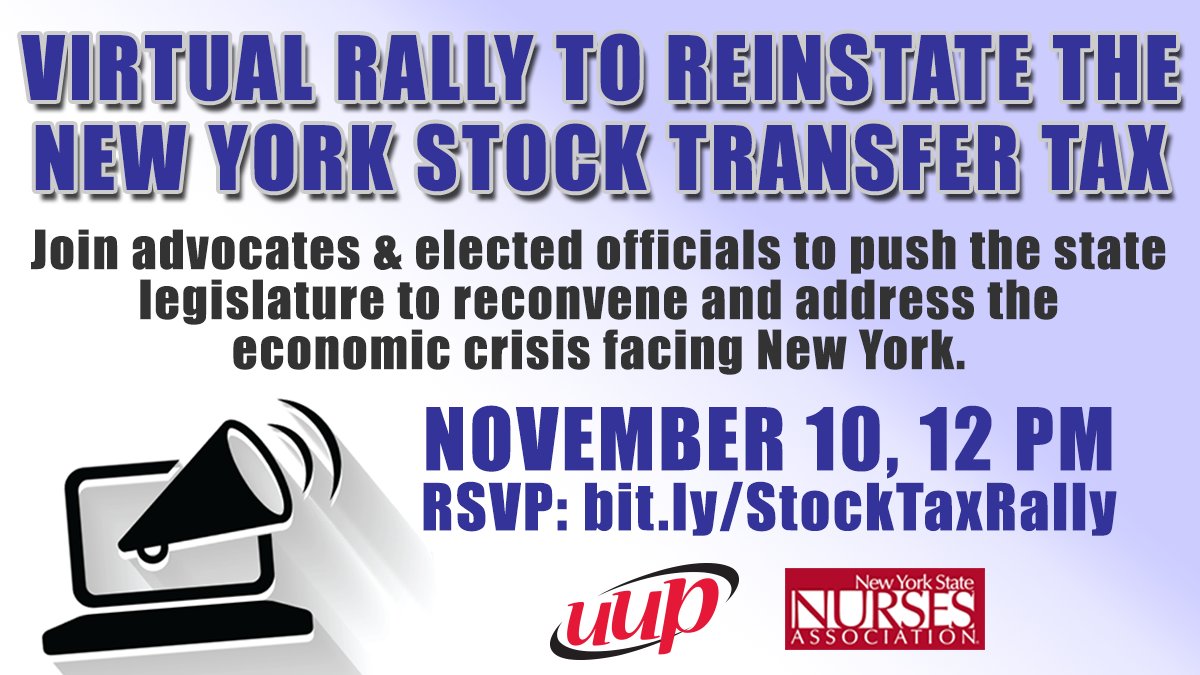 (ALBANY, NEW YORK) - A coalition of unions, state legislators and community groups came together in a virtual rally on Tuesday (November 10th) to send a strong message to New York State Legislators about the state’s Stock Transfer Tax: Keep the money!

Organized by United University Professions (UUP), the rally drew thousands of supporters from Labor, health care and community organizations that called for the Legislature to return to Albany and approve a measure to reinstate the Stock Transfer Tax.

The tax, which is a sales tax on stock trades, is assessed, collected and rebated to the brokers who paid it.

The tax has been levied on stock trades since 1905, but only since 1981 has the tax been fully rebated to Wall Street.

“The Coronavirus Pandemic ‘has wreaked havoc with the state’s finances and has widened a projected budget deficit upwards of ($30 billion),’” UUP President Fred Kowal said.

“Massive cuts ‘will be made to public education, health care and vital governmental services unless other revenue streams are found to bridge the budget gap.’  Reinstating the Stock Transfer Tax ‘would go far in mitigating that impact,” Kowal said.

Registered Nurse (RN) Judy Sheridan-Gonzalez, who serves as President of the New York State Nurses Association (NYSNA), said: “The Stock Transfer Tax ‘is one important measure to raise revenue vital to our survival.’  During the pandemic, New York hospitals ‘had grossly inadequate PPE (Personal Protection Equipment) for Caregivers and insufficient life-saving equipment for patients.’  Nurse staffing ‘was dangerously below what was needed for critical - and even basic - care.’  ‘It is clear additional resources that are needed that cannot be provided without fundamental changes.’  New York billionaires made ($77 billion) ‘during the last surge.’  ‘This tax - just as another surge remains a very real threat - will save thousands of lives.’”

Assembly Member Phil Steck, who has sponsored a bill with State Senator James Sanders, Jr. to reinstate the tax, said the state would have raised between $12 billion and $19 billion in 2020 if the state kept the revenue from the tax.

“The Stock Transfer Tax I’s the most painless way to close the budget hole and restore faith in State Government,’” Steck said. “This is a sales tax of (1/4 of 1%) ‘that is in use all over the world’ (including London since 1700) and was in use from 1905 to 1981 in New York State. When adopted, ‘it never caused one ounce of harm anywhere in the world, including New York.’  It ‘will also solve a problem often highlighted by Governor Cuomo.’  New York ‘exports tax revenue to other states.’  Since this tax ‘will mostly be paid by non-New Yorkers and foreign nationals, it will bring that lost revenue back to New York, just as New Yorkers pay excise taxes to oil-producing states.’”

Sanders echoed Steck’s statement. "This ‘one tax alone would cover most of the deficit, without hurting the wealthy.’  ‘This little tax would allow the rich to join the sacrifice that Working People have been undergoing due to COVID-19.’"

To Directly Access This Labor News Story, Go To: https://uupinfo.org/communications/releases/201110.php