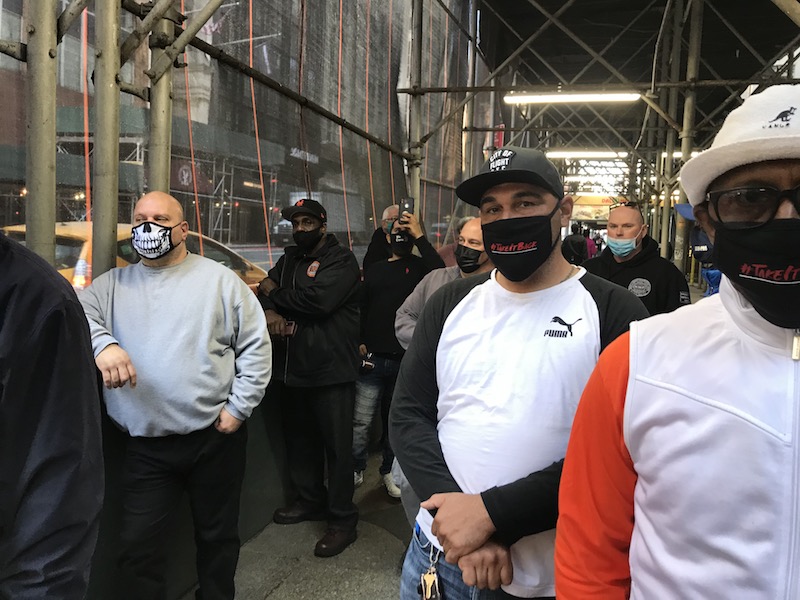 (NEW YORK CITY) - The Billionaires’ Row building where a spinning crane knocked large chunks of metal and glass onto the street below just before the end of October is the tallest structure ever built in New York City with Non-Union Labor - and the accident was a sign that the developer was cutting corners, Laborers Union’s Cement and Concrete Workers District Council Organizing Director Joe Scopo told a rally at the site on Monday (November 9th).

“The Non-Union sector ‘should no longer be allowed to build jobs over ten stories on New York City, because they can’t handle it,’” Scopo told about 30 Building Trades Union Members assembled under a scaffold in front of 111 West 57th Street. “We (Unions) ‘don’t cut corners.’”

On October 29th, with the city buffeted by rain and wind gusts of up to 40 miles per hour from the Hurricane Zeta storm system, the tower crane began “weather-vaning,” spinning freely and a ball at the end of a cable slammed into the building’s upper floors.

The impact sent pieces of aluminum and glass as big as 20 feet long plummeting to the ground as far as a block away.

However, no one was injured, according to the city Department of Buildings, which said tower cranes are supposed to turn when it’s windy for safety reasons, and the crane is stable and was never in danger of collapsing.

“It was ‘listed as a minor accident,’” Scopo told LaborPress before the rally. “We’re saying ‘it’s a major accident.’ ‘They didn’t tie anything down during the hurricane.’”

The Department of Buildings on October 30th issued a Stop-Work Order to the contractor - JDS Construction Group, that prohibits all construction above 75 feet, except for work necessary to keep the site in a safe condition.

It said the order will remain in effect until JDS Construction provides acceptable plans to work safely and another inspection finds no safety issues.

The department’s Crane & Derricks Unit also issued a Stop-Work Order to subcontractor U.S. Crane & Rigging, along with a violation for “failure to safeguard all persons and property affected by construction operations.”

It said that because of that failure, “the ball and hook struck the building several times.”

A hearing is scheduled for December 17th.

“New York City has the ‘strongest crane regulation in the country in place to protect the public, and an incident like this is unacceptable,’” department spokesperson Andrew Rudansky told LaborPress. “Our investigation into this incident ‘is ongoing.’”

To Continue Reading This Labor News Story, Go To: http://laborpress.org/57th-st-crane-crash-happened-on-notoriously-anti-union-job-site/