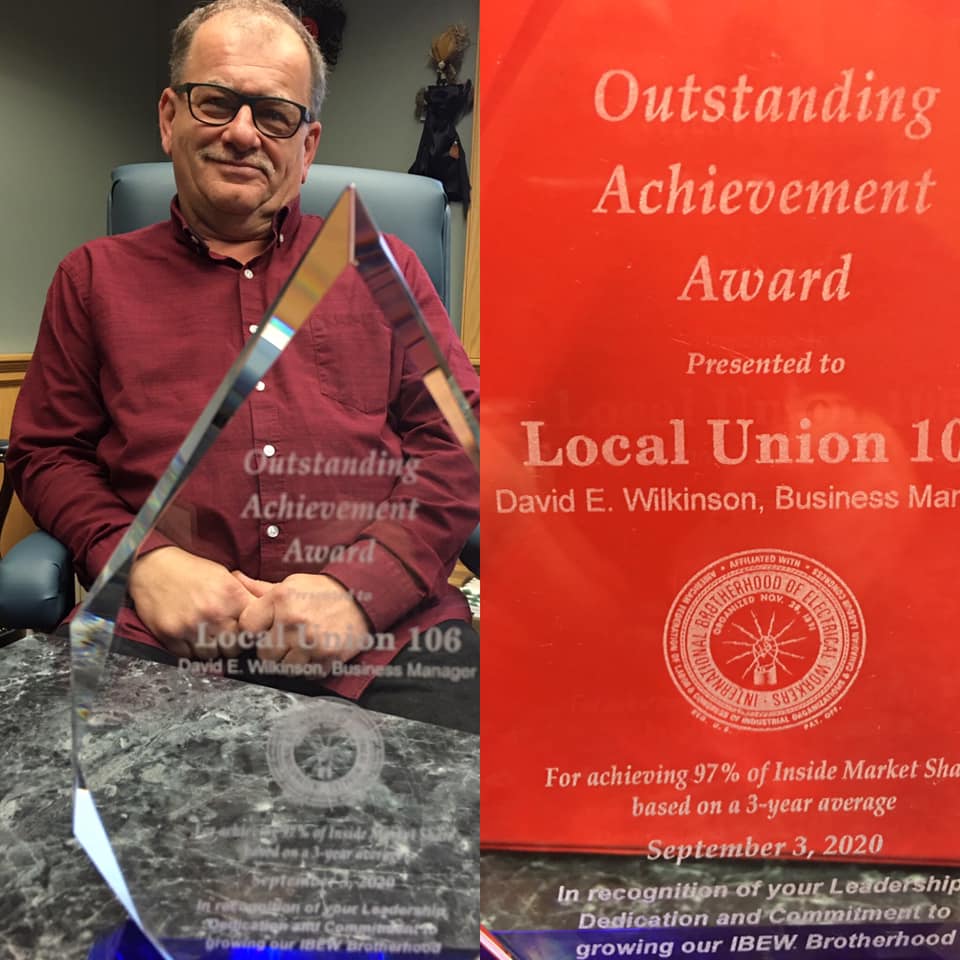 WNYLaborToday.com Editor’s Note: Pictured above, International Brotherhood of Electrical Workers (IBEW) Local 106 Business Manager David Wilkinson proudly displays his Local’s Outstanding Achievement Award received from the IBEW International for its leadership, dedication and commitment to growing the IBEW Brotherhood and achieving a 97% Inside Market Share based on a three-year average.  (WNYLaborToday.com Photos)

(JAMESTOWN, NEW YORK) - Working with its Union Contractors in the Southern Tier of New York State, International Brotherhood of Electrical Workers (IBEW) Local 106 has captured a remarkable 97% of the local market, which Business Manager David Wilkinson attributes to his Union’s conscious decision to connect with decision-makers across a predominately-Republican community and within the construction industry - which has tied the IBEW Local for first place among all other IBEW Locals across the United States.

“For a (predominately) ‘Red’ (Republican Chautauqua) County, like we are, ‘it’s quite an accomplishment.’  We’re ‘not a Chicago or San Francisco or a Washington State’ (that has a high rate of Union Density or Union-friendly businesses),” Wilkinson told WNYLaborToday.com - while showing off an International IBEW Award recognizing the Local for its leadership, dedication and commitment to growing the IBEW Brotherhood and achieving a 97% Inside Market Share based on a three-year average.

For that matter, IBEW Local 106 had ranked second for three years in a row now and is now tied for first place, Wilkinson said, with an IBEW Local in Chicago, Illinois.

IBEW Local 106 has successfully captured nearly 100% of the local market - in part, because of its commitment for the Union and its Members to be highly-involved in its community - from choosing to sit on a number of local boards, including the United Way, to cultivating “good relationships” with elected Republican officials, said Wilkinson, who also credited his highly-trained and skilled Members.  The IBEW Local represents 185 active Members and 40 Retirees.

“(Decision-makers) ‘know us (now) on a first name basis.’  ‘We made it a point to introduce ourselves and educate them’ (on the benefits of using Union Electrical Contractors).  And we ‘offer’ our Union Hall to local groups, like Little League Baseball, who hold their meetings here, ‘free of charge.’  And we ‘belong to everything because you never know - a coach might be the owner of a local company.’  ‘You have to go at this right because (sometimes) you get more jobs after hours.’  ‘It’s about building relationships and trust and it’s been part of our overall game plan,’” Wilkinson said.

The IBEW Local also took advantage of a Job Tracking System, a plan that consists of - on paper, 15 pages.  “We ‘just kept following our plan and that’s how we began to turn jobs.’  And we ‘also reached out and built relationships with’ construction estimators.  We told them we were ‘here to help them and how we could work as a team, where potential savings could come from, as well as (make them acutely aware of our outstanding) Training Programs,” he said.

Ahlstrom Schaeffer Electric Corporation President David Painter (Pictured below with Wilkinson outside the Local’s Jamestown Union Hall), is an IBEW Local 106 Member himself, as well as former Assistant Business Manager to Wilkinson and an Organizer with the Local. 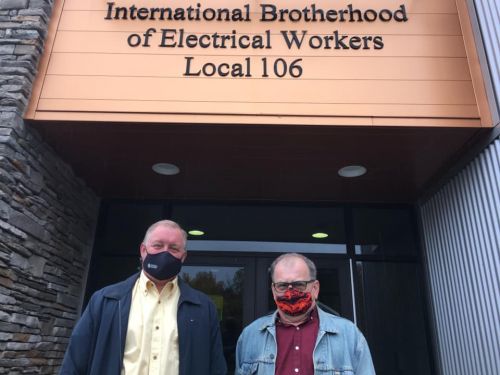 Since assuming the management position at Ahlstrom Schaeffer several years ago, which provides both commercial and residential electric services (“We do it all, up to 32,000 volts”) - Painter has continued to grow a positive working relationship with Wilkinson and the Union.

“Back in 2007, these (area decision-makers) ‘didn’t know who IBEW Local 106 was.’  It was an ‘old school’ mentality,’” Painter told WNYLaborToday.com.

The Union and its contractors also worked to make inroads with Republican Elected Officials, to the point where some other Labor Representatives would ask: “Why is he here?  He’s Republican.”

But it was all part of the process, Wilkinson, who also serves as President of the Jamestown AFL-CIO Labor Council, and Painter said.

“We also met with architects and engineers.  We told them ‘we were here to help them.’  We made appointments and we introduced ourselves.  We ‘had to educate them to us getting the job done - on time and on budget, and not that we were out just to get the work.’  ‘We had to gain their trust.’  ‘And we had to change the language and negotiations in order to gain more market share,’ said Painter as he and Wilkinson took WNYLaborToday.com on a walking tour of Local 106’s Apprenticeship Training Center (pictured below). 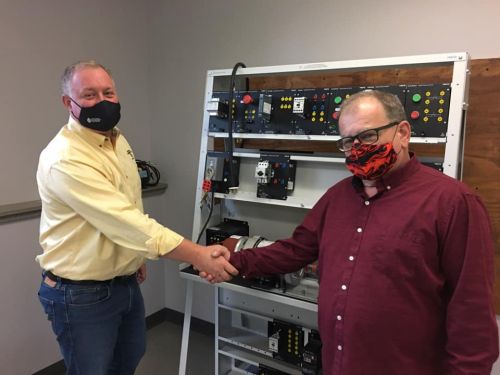 In order to ensure IBEW Local 106 and its Union Contractors continue to hold such a phenomenal market share, Business Manager Wilkinson told Your On-Line Labor Newspaper that his Union is looking to educate the Jamestown Public Schools about not only Local 106’s top-notch Apprenticeship Program, but Pre-Apprenticeship opportunities for local students who may not have college in their future plans and would rather earn-while-they-learn a skilled craft that will more than adequately provide for them through their working days into retirement. 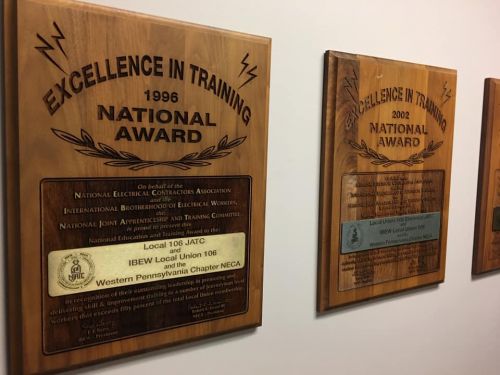 From being able to splice fiber cables to implementing new Green Energy offerings, such as solar, IBEW Local 106 is preparing and training young people who are seeking a bright new future.

“We ‘want to hold that market share and we want to share our success, at the same time.’  ‘We’re in touch with the locals to help create jobs,’” he said.

And hopefully that will happen soon, despite dealing with the all the problems brought about by the Coronavirus in the workplace.