Several Trades Representatives  Who Are Niagara Wheatfield HS Alums, Address School Board Meeting To Impress Upon School District Leaders That There Are Opportunities For Their Students In The Unionized Trades 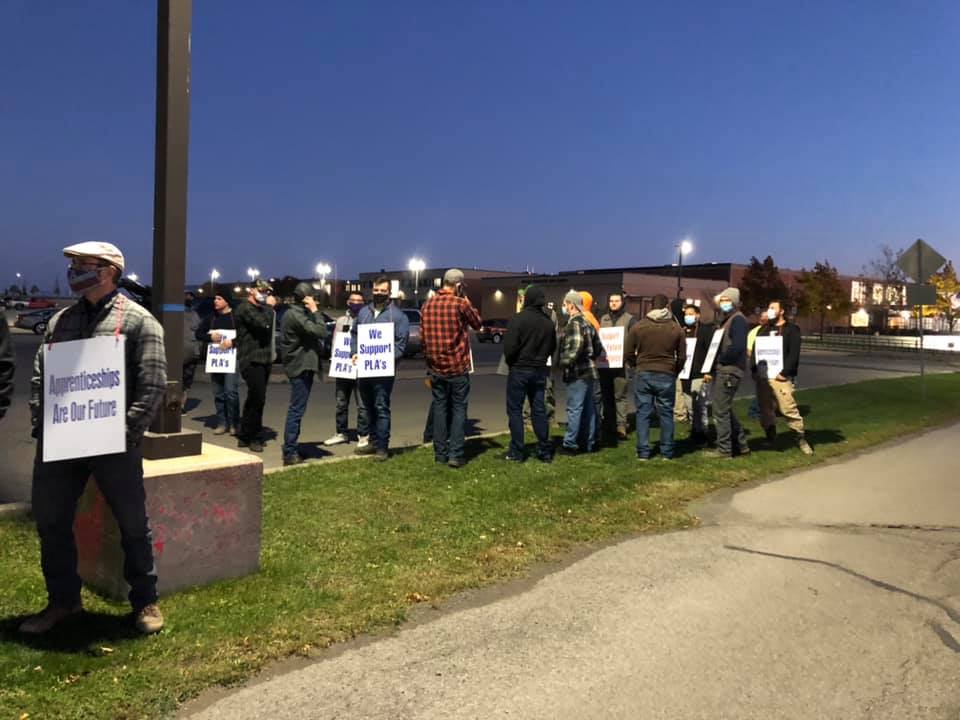 WNYLaborToday.com Editor’s Note: Pictured above, as many as 50 Union Representatives and Members took part in an informational rally that was held outside Niagara Wheatfield High School on Wednesday (November 4th).  The Unions, their Representatives and Members were not only calling attention to the need to hire local Construction Workers on the Niagara Wheatfield Central School District’s $20 million capital improvement project, but also to make School District Officials acutely aware of the benefits of the Niagara County Building & Construction Trades’ Member Unions offered Apprenticeship Programs, which could be a tremendous career path for graduating high school seniors.   (Photo Courtesy Of International Union of Operating Engineers Local 17’s Facebook Page)

And that means, according to International Union of Operating Engineers (IUOE) Local 17 Business Representative Mark Printup, educating the School District on the many employment opportunities in the Building Trades that high school graduates can take advantage of through Unionized Apprenticeship Programs - should they decide that college is not the place for them.

“As an alumni of Niagara Wheatfield, ‘it disturbed me that we didn’t have local labor getting those jobs’ (employed on the School District’s previous and estimated $9 million athletic field project),” Printup, who graduated from the high school in 1990, told WNYLaborToday.com.  “We ‘discussed the use’ of a PLA (Project Labor Agreement) on their new project (with School District Representatives), ‘but the problem now is the project is too far along to legally pull any of the submitted bids.’”

“So, while ‘we would love to have a PLA on their project, we’re here to introduce the Trades’ Apprenticeship Programs to them.’  There are a lot of ‘non-college’ seniors ‘who (could benefit with a great career) in our Apprenticeships.’  Now we’re ‘networking future generations’ - ‘that’s our mission, to teach them about and how to market our Apprenticeships (to students).’  I graduated in (1990) and ‘had no career path.’  I went to (community college) for one semester, ‘but it wasn’t for me.’  About a year later, I wound up going into an Apprenticeship with (then) IUOE Local 463 (in Niagara County),” he said.

As many as 50 Union Representatives and Members took part in an informational rally that was held outside Niagara Wheatfield High School on Wednesday (November 4th) evening before Printup and several others – including Niagara-Orleans AFL-CIO President Jim Briggs, himself a graduate of Niagara Wheatfield, addressed School District Representatives at their evening Board meeting. 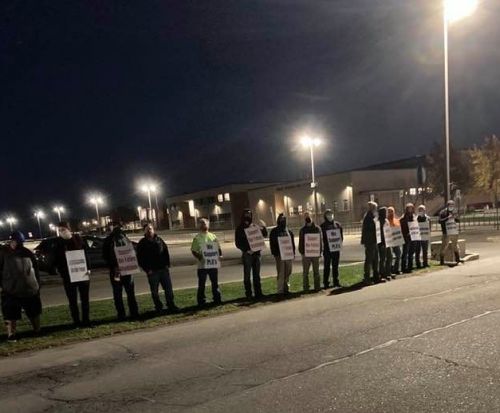 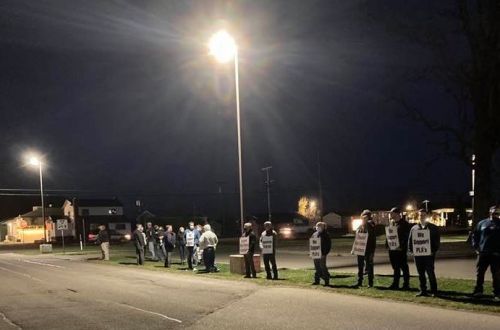 Niagara-Orleans Labor Council President Briggs, a 1974 Niagara Wheatfield High School graduate who now serves as Sub-District Director for USW District 4, also spoke at the School Board meeting: “I ‘tried to remind them’ that PLAs and Apprenticeship Programs ‘are two keys that play into the next generation’s future’ and that projects that carry PLAs ‘provide jobs and good wages that allow them to take care of themselves for the rest of their lives,’ but the Superintendent and some of the Board Members who stand behind him ‘are more interested in (focusing on achieving cheaper bids).’  While there were ‘some’ Board Members who were ‘supportive of what I was telling them,’ they said they ‘wanted to get more information’ (on PLAs and Apprenticeship Programs), ‘but that only stretches out the process and is a means of getting rid of the Union interest.’”

“We ‘will be trying to get in front of every’ School Board across Niagara and Orleans Counties (in the future) ‘and be pro-active when it comes to PLAs and Apprenticeships, which help create cost savings and job opportunities for high school graduates.’  ‘That’s because the biggest difference from those who go to college is that at the end - Apprentices don’t have college debt and they earn while they learn while on the job,’” Briggs pointed out.

IUOE Local 17 Business Manager Gary Swain, meanwhile, told Your On-Line Labor Newspaper:  “A PLA ‘makes good business sense, but they’re all about getting the lowest dollar’ (bids on the project).  ‘It shouldn’t be all about paying Workers the least they can.’ But we’re ‘also trying to show (School District Officials) that their students can either go on to college or go in Trade Apprenticeships.’  ‘We’re looking to change the outlook’ about Apprenticeships.”