Interested In Getting Involved & Making A Difference By Running For Elected Office? Well, You Are In Luck - The Niagara-Orleans Labor Council Is Offering Political Candidate Training This Saturday In Niagara Falls 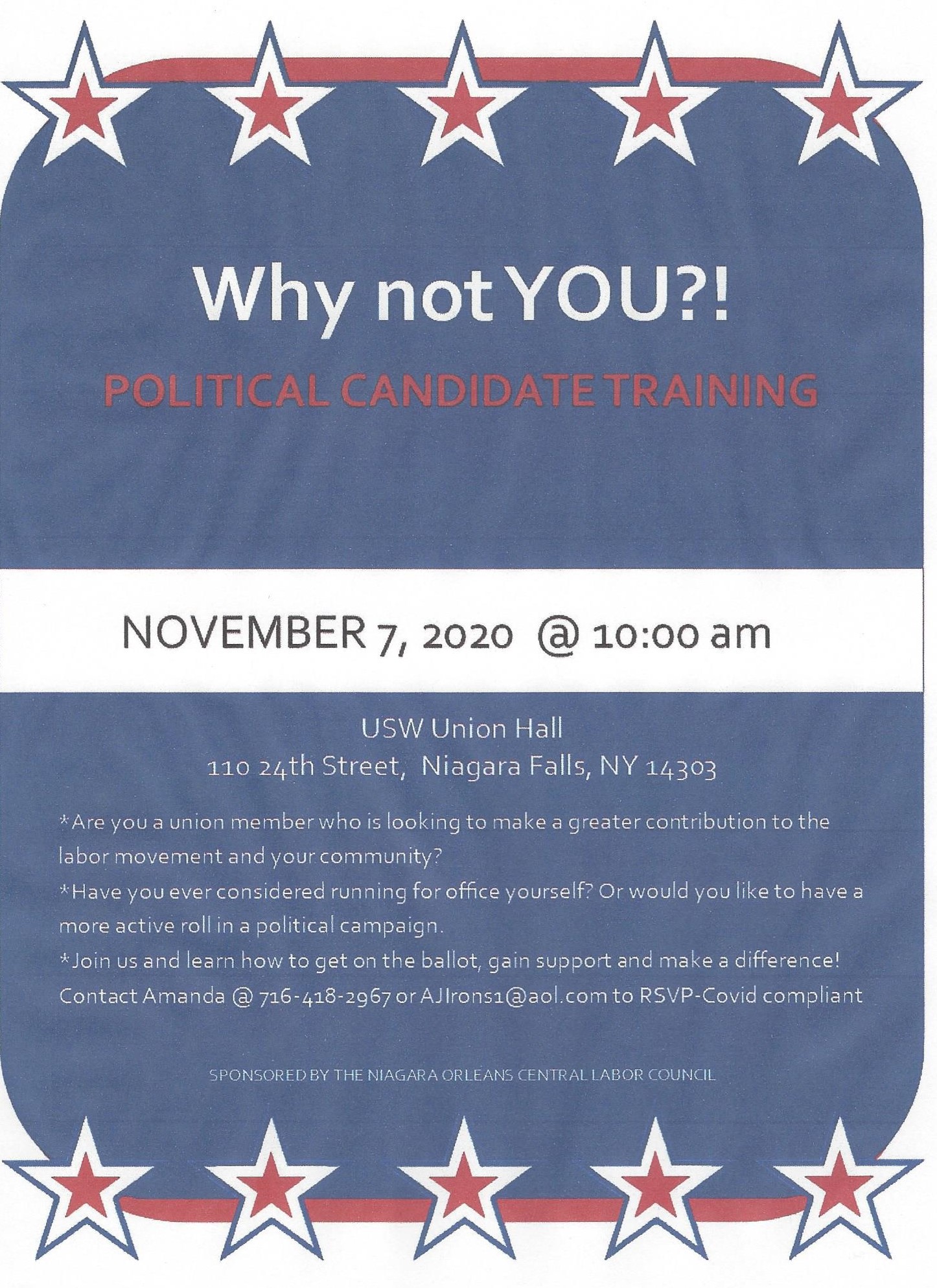 (NIAGARA FALLS, NEW YORK) - Are you a Union Member who lives in Niagara County who’s looking to make a greater contribution to the Labor Movement and your community?

If so, have you ever considered running for public office yourself?

Or, would you like to have a more active role in a political campaign?

If you answered yes to any of the above, the Niagara-Orleans AFL-CIO Central Labor Council is holding a COVID-compliant Political Candidate Training Session this Saturday (November 7th), beginning at 10 a.m., at the United Steelworkers (USW) Union Hall, located at 110th 24 Street in Niagara Falls.

“We’ve been ‘kicking this around for a long time because need more people from the Labor Movement to run for public office,’” Amanda Irons-Rindfleisch, who serves as the newly-elected Vice President of the Niagara-Orleans AFL-CIO Central Labor Council, told WNYLaborToday.com. “Niagara County ‘is so unique with our Union Density and we need those ‘who live in’ Niagara County ‘to help us - because there are so many who live here ‘who are’ Union Members.  ‘We want people to learn more and then go for it.’”

Irons-Rindfleisch ran, unsuccessfully, for the Town of Pendleton Town Board in 2019.

“We want people ‘to be comfortable’ (when making a decision to seek public office),” said Irons-Rindfleisch, a USW Local 2001-represented Niagara County Sheriff’s Department Investigator.  “We have had a number of Labor people ‘who have run before and can serve as an inspiration and lend their support.’”

One of those Union Members is Ironworkers Local 9 President Adam Dickey, who ran twice over the last couple of years – once for the Niagara County Legislature and for the North Tonawanda City Council, races he unfortunately lost.

“It was a ‘good’ experience,” Dickey - who is Chairman of the North Tonawanda Democratic Committee, told Your On-Line Labor Newspaper, “and I wish more (Union Members) would do the same.”

“I ‘will be happy to tell (those in attendance on Saturday), step-by-step, what I went through.’  ‘What it did for me too was open the doors to meeting so many others in the local Labor Movement while knocking on doors.’  They and others were ‘very concerned and happy to talk to someone who was also concerned about their community and things like policing and fixing sidewalks,” he said.

Those who attend Saturday’s event will be educated in a number of areas, including how to get on the ballot - be it Village, Town, County or State, conduct a petition drive, handle campaign finances, understanding Labor issues and how to gain public and Union support, among other things.

“They will learn what the ‘nuts and bolts’ of running a campaign are,” Irons-Rindfleisch said. “This event is ‘free’ and ‘we’ll welcome you.’  ‘In the end, we’ll show those who are interested in running what it takes to run for public office.’”

WNYLaborToday.com Editor’s Note: For more information or to sign up, contact: Amanda Irons-Rindfleisch at 716 - 418-2967 or via e-mail at ajirons1@aol.com.