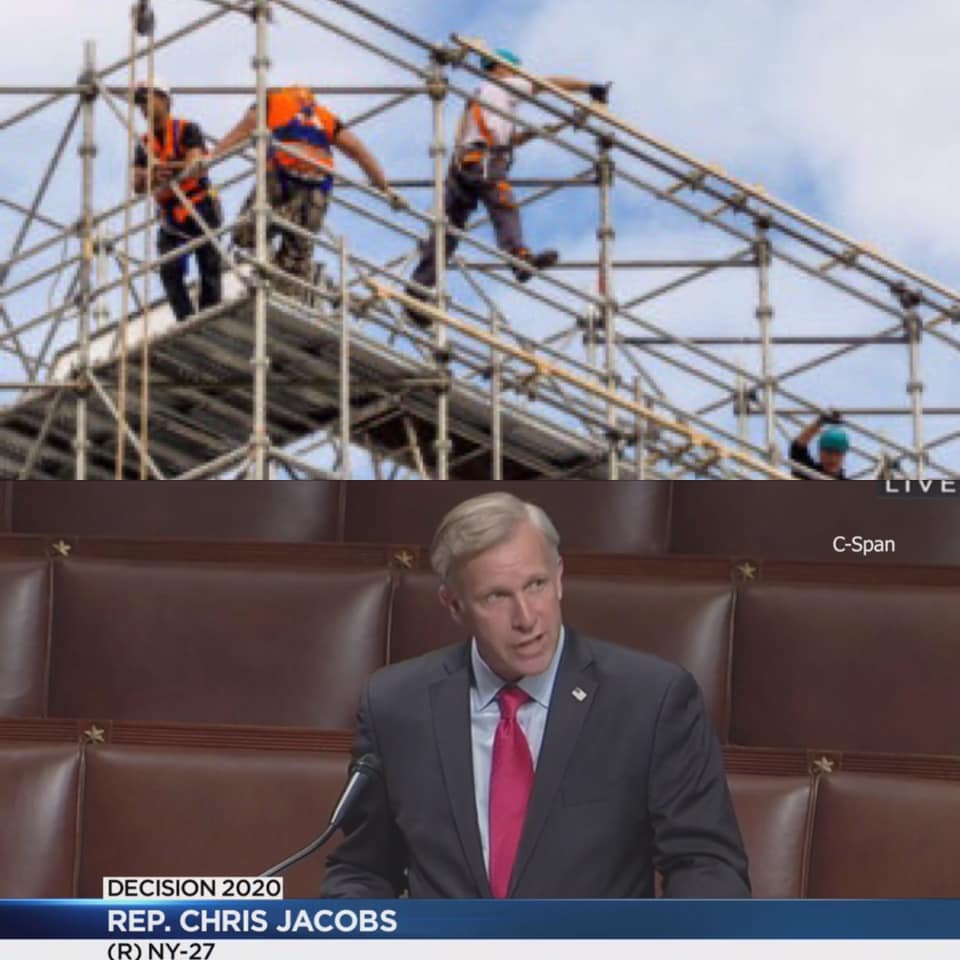 (ALBANY, NEW YORK) - The first act introduced into Congress by Republican Congressman Chris Jacobs, a millionaire real estate developer and nephew of Buffalo’s powerful Jacobs Family, is an attempt to limit the liability of developers and property owners for workplace injuries sustained by Construction Workers in New York State.

While it would represent a major coup for the state’s powerful real estate industry, the Bill could also benefit Jacobs - personally.

Jacobs owns a portfolio of properties in Buffalo worth as much as $33 million and he has received hundreds of thousands of dollars in campaign donations from the real estate industry.

Throughout the special election that seated Jacobs in Congress and his on-going general election campaign, Jacobs has embraced and leaned into the divisive political style of Republican President Donald Trump, whose own wealth comes from a real estate empire built on his family fortune.

Now, in another symmetry with Trump, Jacobs has made his first Congressional priority enacting policy that may redound to his personal benefit as well as that of his corporate backers.

Jacobs was sworn into Congress on July 21st, 2020 after winning a special election prompted by the resignation of former Republican Congressman Chris Collins, who pled guilty to felonies related to insider trading.

To win his seat, Jacobs defeated Democrat Nate McMurray, who is himself a corporate attorney for Delaware North.

After getting his Congressional career off to an ignominious start by – accidentally, according to Jacobs – casting his first ever vote against funding for the U.S. Postal Service, Jacobs’s first legislative act was to introduce the “Infrastructure Expansion Act of 2020” on September 11th.

Notwithstanding the Bill’s name, Jacobs’s act does not fund or expand infrastructure in any way, but rather shields building owners and general contractors from financial liability from workplace injuries suffered by Construction Workers.

The Bill is aimed squarely at New York’s Scaffold Law, a Labor protection that holds property owners and construction employers responsible for ensuring that construction worksites above ground level “shall be constructed, placed and operated as to give proper protection to a person so employed.”

The Scaffold Law is an early Workplace Protection Law passed by the New York Legislature in 1885 in response to frequent death and injury sustained by Construction Laborers working in unsafe conditions.

To Continue Reading This Labor News Report, Go To: https://news.littlesis.org/2020/11/02/congressman-chris-jacobs-seeks-to-preempt-key-new-york-labor-law-which-could-benefit-his-personal-real-estate-business/