They Threw Us Out Like We Were Nothing. - Seven Workers Fired In Queens After Exercising Their Right To Unionize 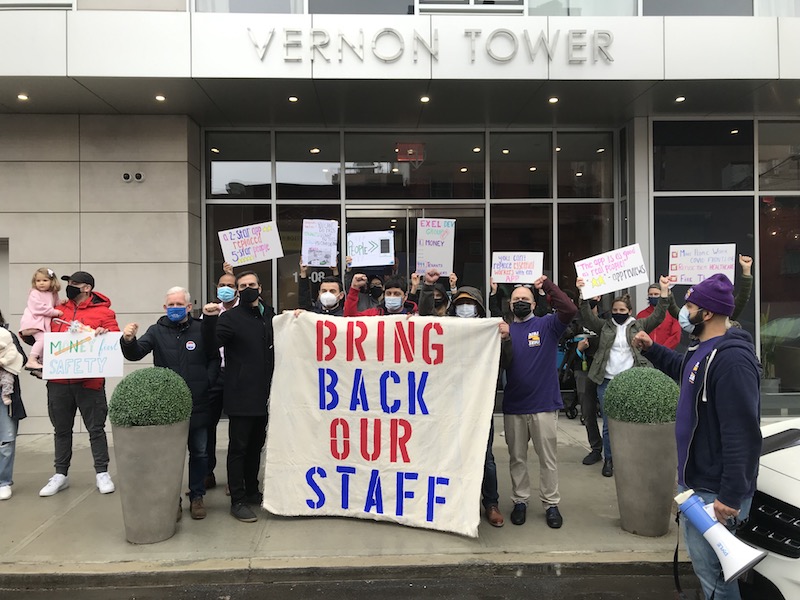 (NEW YORK CITY) - “We ‘made sure’ this building ‘was kept safe for everyone,’“ Osman Ak told the crowd of about 70 people outside the Vernon Tower building in Astoria on Thursday (October 28th). “We ‘spent months drenching boxes in Lysol.’  ‘They threw us out like we were nothing.’”

Ak, the 37-year-old father of a teenage son, was one of seven Workers laid off from the building at 11-08 31st Drive, a couple blocks inland from the East River, on October 16th - barely six weeks after they had signed their first Union Contract as Members of Service Employees International Union (SEIU) 32BJ.

He had been working there as a Doorman since it opened two years ago.

“They ‘definitely fired us because of the Union,’” he told LaborPress before the rally. “They ‘don’t want to pay us what we deserve.’”

The owner, Excel Development Group, replaced the seven - five Doormen and two Porters, with a superintendent who doesn’t live in the building and a “virtual Doorman camera system,” according to residents and 32BJ.

The Union is demanding they be reinstated and has filed an Unfair Labor Practice (ULP) Complaint with the National Labor Relations Board (NLRB), charging that they were axed in retaliation for their Union activity - and that Excel did this unilaterally, without any bargaining.

According to a 32BJ spokesperson, a company official told tenants in the building on a video call that the layoffs were made necessary by problems with the Union.

“It was a ‘very clear Unfair Labor Practice,’” she says.

Ak said the company told workers it couldn’t afford to keep them on.

He also says that Excel tried to lay Workers off several times after the Union Contract went into effect on September 1st and cut Doormen’s pay from $17.81 to $15.88 an hour, ostensibly to pay for health insurance coverage.

That coverage was supposed to be included in the contract, according to 32BJ.

“What ‘were they asking for?,’” 32BJ organizer Zamir Khan told the rally. “They ‘were asking for fair health benefits so they could take care of their children, their spouses, and their families.’”

The layoffs and pay cut were also illegal, 32BJ says.

The building receives over $5 million a year in 421a property-tax exemptions intended to encourage construction, and is thus required by law to pay the Building Service Workers Prevailing Wage.

It says Excel owes the Workers tens of thousands of dollars in back pay.

“What Excel Development ‘is doing is cruel,’” said New York State Senator Michael Gianaris (Democrat-Queens). “There’s ‘no other way to put it.’”

Most of the residents have signed a petition urging Excel to reinstate the Workers, 32BJ says.

To Continue Reading This Labor News Report, Go To: http://laborpress.org/seven-fired-in-queens-after-exercising-their-right-to-unionize/