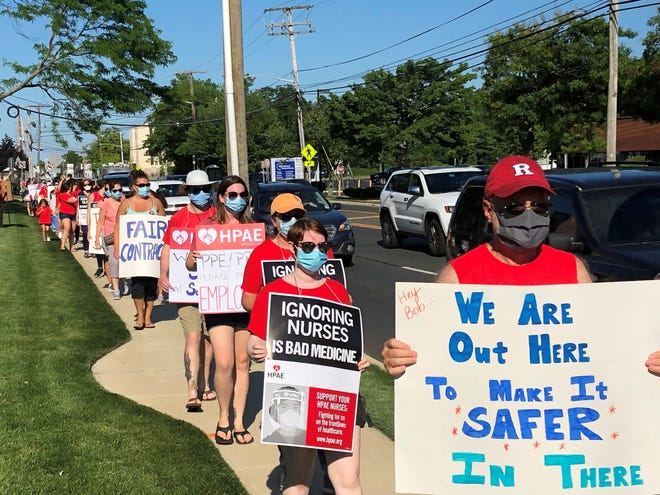 (NEPTUNE, NEW YORK) - More than 1,000 Housekeepers, Technicians and other Service Workers at Jersey Shore University Medical Center are wrapping up voting in an election to decide whether to join a Labor Union.

Workers supporting the bid to join the Health Professionals and Allied Employees (HPAE) Union said they have been considering an Organizing Campaign for several months, but the Coronavirus Pandemic made it more urgent.

"I want it for ‘better’ working conditions, ‘better’ equipment ‘where we can protect ourselves and others,’ a ‘better’ workload," said Kim Robinson, 61, an Ocean Township resident who has worked in the hospital’s dietary food and nutrition department for three years.

The voting, which has been conducted by mail-in ballots, ends Friday.

The results likely won't be known until after the U.S. Election is held on November 3rd.

The Organizing Campaign at the Neptune hospital is the latest skirmish between its owner, Edison-based Hackensack Meridian Health, and the HPAE Union, which also represents 1,300 Jersey Shore University Medical Center Nurses.

It caps what has been an uneasy year.

Nurses were outspoken when Coronavirus swept through the region in March and April about not having enough Personal Protective Equipment (PPE) and an Emergency Room Nurse who was a Union Leader and raised concerns about the lack of PPE was eventually fired.

The company rejected claims that it had put Workers' safety at risk and dismissed the idea that the Union Leader was fired for voicing fears about his Members' safety.

As the pandemic eased, the company and Union in July reached an agreement on a new three-year contract., but more labor discord was brewing, this time with Service Workers - such as Housekeepers, Patient Care Technicians, Food Service Workers and Transporters.

"There were ‘a lot of issues that they came to us with,’" HPAE President Debbie White said. "As the pandemic ‘set in, quickly their focus turned into health and safety.’  ‘They saw the Nurses had a mechanism to solve the issues in the workplace.’"

Hackensack Meridian Officials said they have told Employees they prefer to work with them directly, rather than through a Union, and they urged them to vote no.

But Gloria Atkinson, a Patient Care Technician in the emergency department who has been at the hospital for eight years, said she was voting in favor of the Union, hoping it would lead to better working conditions.

She said she provides anything that's needed - taking vitals, helping with electrocardiograms or simply watching over patients who might be at risk of falling.

But Atkinson, 35, of Howell, said she can feel overwhelmed trying to keep track of several patients at a time and she is envious Nurses have a limit on the number of patients they need to care for at any given time: "I ‘would love to see safe staffing ratios for Techs.’”

To Read This Labor Organizing News Story In Its Entirety, Go To: www.app.com/story/money/business/career/2020/10/22/jersey-shore-university-medical-center-workers-vote-should-they-join-union/5989245002/