Honoring âHeroicâ Letter Carriers: One Of The National Association Of Letter Carriersâ Annual Heroes Of The Year Award Goes To Buffalo/Western New York Branch 3 Member Joshua Detlef, Who Helped Save A Family From A Burning Home 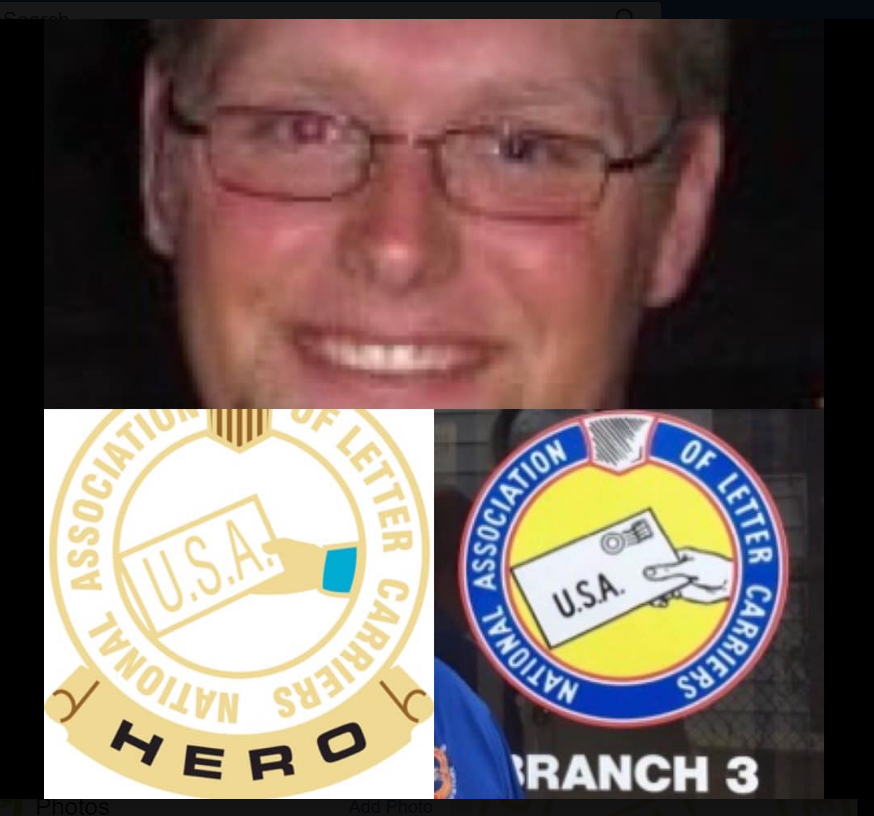 (BUFFALO, NEW YORK) – Each year, the National Association of Letter Carriers (NALC) annually singles out several of its Members from across the United States who’ve performed heroic actions while carrying out their mail delivering duties.

This year, a Member from NALC Buffalo-Western New York Branch 3 and two Members from NALC Rochester Branch 210 have been recognized for their actions with NALC’s Heroes of the Year Award.

NALC Buffalo-Western New York Branch 3 Member Joshua Detlef (Pictured Below/Facebook Photo) was delivering mail on his route in the Buffalo Suburbs of Lancaster and Depew on May 7th (2019) when, he recalled: “I noticed smoke rising over the top of houses.” 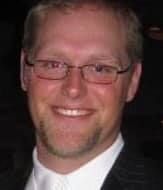 When he raced around the corner to investigate, the 13-year Letter Carrier saw a customer’s garage “engulfed in flames.”

As he approached the house, he realized that a neighbor also had rushed to the scene.

The neighbor was on the phone with a 911 Operator while banging on the front door to alert the residents, but Detlef knew the homeowners never used the front entrance.

He rushed to the side of the house.

“I ran and ripped open the side door,” Detlef said. “There were two kids in there and the dog.”

A few moments later, the children’s mother, Kelly Kwilos, came into the room from the basement, where she had been working.

Detlef told Kwilos: “You have to get out of here - the garage is on fire!”

Alerted to the situation, Kwilos quickly gathered her children, mother and small dog and left the house.

The carrier grabbed the larger family dog by the collar and left with them.

Once outside, Detlef confirmed that all of the residents had been accounted for.

“I just wanted to make sure that (everyone) had gotten out of the house,” he said.

He then escorted the family to his van to wait for the Fire Department.

Just minutes after their evacuation, the fire spread from the garage to the house.

Once the Kwilos family was safe, Detlef looked around and noticed the neighboring house also had caught fire.

He rushed over to make sure that everyone was all right.

Fortunately, that family already had managed to evacuate.

Once he determined all of his customers were safe and emergency services were on their way, Detlef continued on his route.

Firefighters were unable to save the Kwiloses’ house, but thanks to Detlef’s quick thinking and bravery, nobody was injured.

The NALC Branch 3 Carrier, however, downplayed his role in the situation.

NALC Branch 3 President David Grosskopf, Jr. told WNYLaborToday.com: “You know - ‘get this guy a cape.’  ‘I couldn’t be more proud of him.’  I carried the mail for nearly (22) years and I ‘never was faced with such a situation where I had to do anything (like that).’  Josh ‘did exactly what every Letter Carrier would do, he jumped into action for our customers, who we see every day and are an extension of our families.’  ‘I am proud of all’ my (NALC Branch 3) Members.”

It marked the second year in a row that a Member of NALC Branch 3 was recognized with the NALC Heroes of the Year Award.

In 2019,  Buffalo Branch 3 Member Theresa Jo Belkota of Lewiston  in Niagara County was recognized for aiding a seriously injured boy who’d been run over by a lawn-mower (Read WNYLaborToday.com’s Labor News Report at www.wnylabortoday.com/news/2019/11/03/buffalo-and-western-new-york-labor-news/recognized-for-more-than-just-delivering-the-mail-the-national-association-of-letter-carriers-honors-its-heroes-of-the-year-including-buffalo-branch-3-letter-carrier-theresa-jo-belkota-of-lewiston-new-york/?fbclid=IwAR3c26USY2xlbTaqVBuSGsTgpP1WqSHEuqOErJ4pdYf_YHGbJouhsNtVeJw)

NALC Branch 3 represents 2,000 Members across Western New York, including 1,400 who are active Letter Carriers.  On a daily average, each Letter Carrier makes as many as 600 to 700 stops and delivers as many as 200 to 300 packages, Grosskopf said. 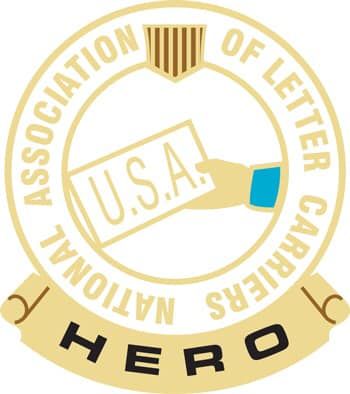 Rochester Branch 210 Member Ramique Hill had already noticed the Police Officer across the street during one of his deliveries on October 4th, 2019, but he wasn’t really paying attention when he heard a little commotion coming from the scene.

Then, suddenly, “I heard a gunshot go off,” Hill (Pictured Below) said, and he quickly acted. 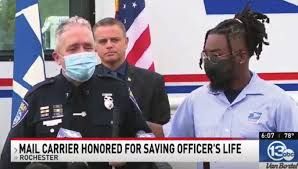 “I (secured) the mail and called the police,” the Carrier, who was a City Carrier Assistant at the time, recalled.

The Emergency Responder asked him to check on the Officer if he felt comfortable approaching the scene, so Hill went up to the house.

He was standing on the porch when he “saw a lot of blood.”

Another shot went off inside the house, and Hill, despite the danger, decide to go through the front door.

There, he could see the Officer lying on the ground in a pool of blood.

A neighbor, who also had heard the original commotion and rushed to help, was restraining the assailant, so Hill quickly went over to the injured Officer and attempted to calm him down.

As Hill later found out, the Officer had been stabbed several times during the course of a welfare check, including several serious injuries to his eyes.

“He was panicking and saying that he couldn’t see,” Hill said. “I let him know that the cops were on their way.”

The Officer was taken to the hospital and eventually recovered, though he did not regain his eyesight.

The incident was covered extensively by Rochester news outlets, which featured Hill and two others for their role in helping the Officer.

Hill was also recognized by the Rochester Police Department and the City of Rochester.

He also received the Postmaster General Hero Award in recognition of his bravery.

The NALC Letter Carrier was modest about the attention.

“I ‘just did at that moment what I thought was the right thing to do,’” he said.

On Saturday, May 9th (2019), Branch 210 Member David Schickler (Pictured Below/NALC Photo) was about to deliver to the first house on his route when he noticed a car abruptly pull over to the side of the road. 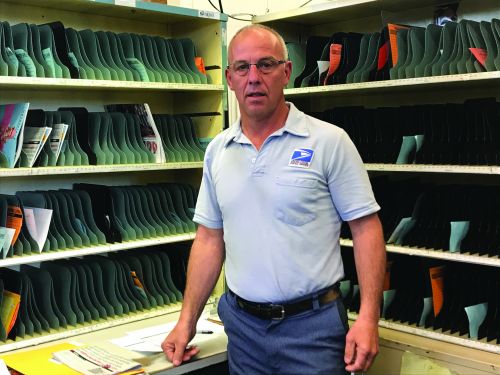 He then glanced over and saw the same thing that the car’s driver had seen: smoke, rising from the back corner of a multi-apartment house on his route.

The driver opened his door and let the 32-year Carrier know that he was calling 911, but Schickler decided not to wait for emergency services to arrive.

As someone who knew the building well, he wanted to warn his customers about the fire.

After entering the residence, Schickler knocked on doors to alert the residents.

When a couple of residents opened their doors, “I told the two young ladies that they had to get out,” the Letter Carrier said.

By the time he had gone through the house, all of the building’s tenants had been evacuated.

When he finally left the building, Schickler was met by Firefighters, who began working to extinguish the blaze.

The fire was later found to have been caused by an electrical shortage.

Though the blaze was put out before any extensive property damage occurred, the flames did reach the bedroom of one of the young women whom the Carrier had warned.

Schickler said that his assistance was just part of the job.

NALC Branch 210 President Ken Montgomery told WNYLaborToday.com: “I think it ‘gives all a sense of relief that our Letter Carriers are out there should something happen.’”

On Hill, Montgomery said: “He is a ‘great’ young man - a ‘very proud’ Man of Color ‘who came to the defense of a Police Officer’s life.’  ‘And with all the civil unrest we have had and with Black Lives Matter, to see him come to (the Officer’s) aid, it sends a chill down my spine.’  ‘It shows me that people do care - regardless of race.’”

On Schickler, Montgomery said: “I’ve known Dave since we went to high school together, some (36) years ago.  ‘He took it upon himself to assure people were out of that building.’  There were people living in two apartments ‘who didn’t know (there was a fire).’  ‘He definitely saved their lives.’”

Montgomery also took the time to retell a story to Your On-Line Labor Newspaper, where he had traveled to NALC Headquarters in Washington, D.C. and was talking to Editorial Representatives of the Union’s Magazine: The Postal Record.