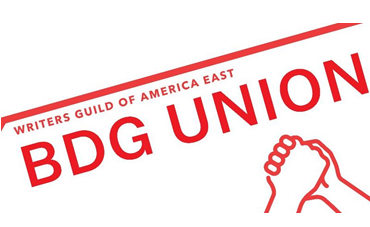 (NEW YORK CITY) - The Staffs at publications owned by Bustle Digital Group, which includes Bustle, Romper, Mic, Nylon and Elite Daily - among others, have announced their plans to form a Union with Writers Guild of America East.

The effort includes about 205 Staffers in Editorial, Creative, Social and Video and encompasses all of BDG's publications, which also includes Input, Inverse and The Zoe Report.

The only publication excluded from the Union effort is W magazine, which is operated as a joint venture.

In an organizing letter sent to BDG management, Staffers said they are Unionizing to fight for fair and transparent compensation, diversity and inclusion commitments, and clear editorial independence and standards: "In Unionizing, we are working collectively to fulfill BDG's publicly stated values and create a safe, fair workplace where everyone's talents are nurtured, equitably compensated, and respected - a collaborative workplace where everyone's voice is heard.  If we are to be the rule-breaking Global Media Company our leadership thinks of us as, it's time for them to listen."

BDG has sought to be a top tier Digital Media Empire, achieving what "Condé Nast, Hearst and Meredith had in the 1980s and 1990s during the glory years," CEO Bryan Goldberg told Bloomberg last year.

Goldberg was a co-founder of Bleacher Report, which was sold in 2012 to CNN's parent company.

In 2013, Goldberg founded the women-focused site Bustle and has since grown a portfolio of media brands, launching some internally and acquiring other financially distressed companies like Mic.

BDG's acquisition of Mic created tension internally and externally as Goldberg was accused of Union Busting when he agreed to buy Mic in a fire sale.

Nearly all Mic Staffers, who Unionized just a year earlier, were let go ahead of the acquisition.

Last November, Bustle laid off eight Staffers and some Freelancers "out of the blue," one laid-off Staffer told CNN Business.

In April, BDG laid off about two dozen Staffers and shut down The Outline, a media brand it acquired about a year prior.