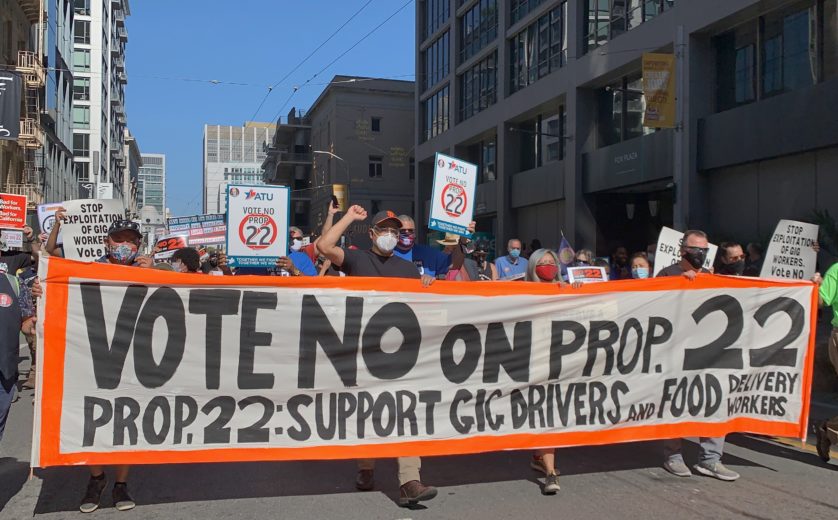 (SAN FRANCISCO, CALIFORNIA) - Janitors, Housekeeping Staff, Food Concessionaires and waiters shouted above the din of honking horns as they demanded better pay and benefits, decried discrimination in the workplace, and urged voters to reject Proposition 22.

Those who have never been represented by a Union (currently only about 10% of American Workers are) might wonder why Members of Unite Here or the Service Employees International Union (SEIU) would be invested in the fate of Ride Share Drivers?

After all, the Gig Workers who would be directly impacted by the passage of Prop 22 aren’t a part of any Union.

If they were, they certainly wouldn’t be considered Hospitality Workers or Custodial Staff - the two sectors represented by the respective Labor Organizations.

But Members of a majority of major Unions in the State of California say that if Prop 22 passes, it will change what work looks like for thousands of Californians, Gig Workers and Union-represented Employees alike.

“Our bargaining power ‘will be weakened by these people not having a say about their work,’” said Nafis Griffis, a Banquet Waiter and Member of Unite Here Local 2.

“If we ‘lose this Proposition 22, it’s like losing some soldiers,’” he says, describing the fight for Labor as a kind of war.

In short, Laborers like Griffis see Prop 22 as a serious threat to Organized Labor and Workers’ Rights - everywhere.

And that’s why they are turning out in the streets to make their voices heard.

Proposition 22, which secured a spot on this year’s state ballot thanks to a huge push from gig economy companies, aims to ensure Gig Workers remain Independent Contractors (as they are currently classified) instead of Employees.

The initiative would override Assembly Bill 5, signed in September 2019, which required Gig Companies to reclassify their Workers as Employees instead of Independent Contractors.

To Continue Reading This Labor News Story, Go To: www.sfweekly.com/news/organized-labor-fights-uber-and-lyfts-prop-22/