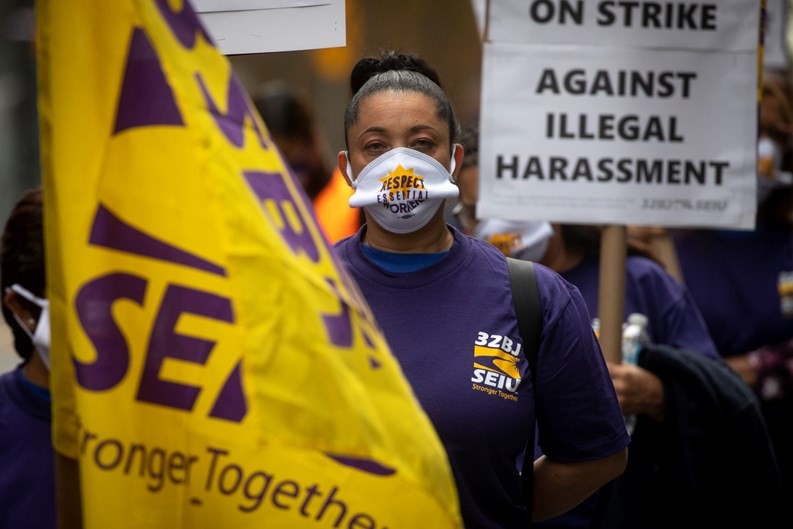 (PARSIPPANY, NEW JERSEY) - As multi-family owners and residents around the country ask what they can do for their Property Workers while the world enters its second half of a year in the grips of the coronavirus crisis, Building Staff employed by Parsippany-based Planned Companies went on strike last month to demand an end to what they claim are “untenable” working conditions.

The Hudson Reporter cites officials with 32BJ of the Service Employees International Union (SEIU) with saying more than 100 Residential Building Service Workers at Planned properties in Northern New Jersey petitioned their employer to demand hazard pay of an additional $2 an hour, as well as 14 extra paid sick days to be used for quarantine purposes during the pandemic.

Additionally, according to the Reporter - 32BJ alleges that when Employees attempted to organize and join the Union, they were intimidated and harassed by the company.

With support from the Union, as well as elected officials, Workers from eight buildings in Jersey City, Hoboken, East Orange, Secaucus and Guttenberg walked off the job on September 24th and rallied in front of two downtown Jersey City residential buildings operated by Planned.

“We’re taking the streets because Planned has ‘yet again failed to respect the Workers’ right to organize free from retaliation,’” says Kevin Brown - Vice President and New Jersey State Director of 32BJ SEIU. “This is ‘unconscionable at any time.’  ‘During a pandemic, it’s downright despicable.’”

During the rally, according to The Hudson Reporter, Brown called for a moment of silence for Union Supporter Dario Cardenas, a Porter employed by Planned at The Beacon in Jersey City who died earlier this year from COVID-19-related complications.

Iris Aliaga, a Peruvian Immigrant who has worked at Planned buildings for about two years told a reporter: “We ‘don’t want empty promises anymore.’  ‘What we want is simple: we want to be paid a living wage, we want to be able to quarantine without having to be scared of not being able to make rent, and we want (the) discrimination to stop.’”

The New Jersey Cooperator followed up with Brown, who provided the following e-mailed statement: “All Workers involved in the September Strike have returned to their jobs.  Once again, Planned has rejected the Workers’ demands.  Nonetheless, it raised wages for a few Workers after the Strike at just one of their buildings.  Planned has not made any improvements to its inadequate sick time policy and lack of hazard pay, fundamental to the Workers’ demands, or to its unaffordable health insurance plan.  Under these difficult conditions, Workers continue to come to work with the weight of the pandemic on their shoulders.  They remain strong and continue to fight for good wages and benefits to sustain themselves and their families.”

To Read This Labor News Report In Its Entirety, Go To: https://njcooperator.com/article/nj-property-workers-strike-at-planned-companies-buildings/full#cut