Broken Promises: How Trump Betrayed Ohioâs Autoworkers - Trump Made A Pledge To The Workers Of The Lordstown Plant That He Could Save Their Jobs & Their City, Instead, The Massive Auto Plant Shuttered & 4,500 Were Left Unemployed

âI Was Looking At Some Of Those Big, Once-Incredible, Job-Producing Factories And Melania Said, âWhat Happened?â I Said, âThose Jobs Have Left Ohio, But Theyâre All Coming Back. Donât Move. Donât Sell Your House.â - President Trump/2017 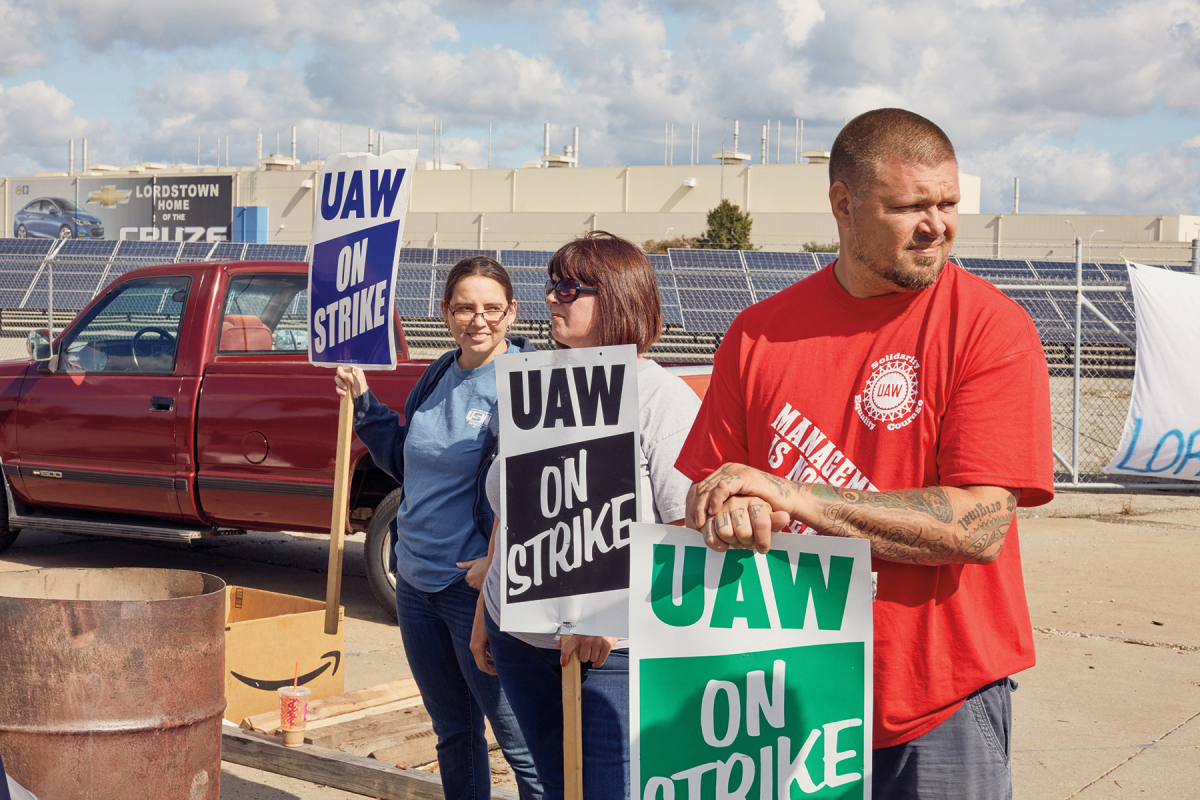 (LORDSTOWN, OHIO) - Dan Aurilio’s seven-year-old son, Landon, is home from school.  He hits a plastic ball with a plastic bat and looks across his Fort Wayne, Indiana, cul-de-sac toward the house across the street.  “His one friend in the neighborhood lives there,” says Aurilio, a proud Italian-American son of Youngstown, Ohio.  A minute later, the neighbor’s garage door falls and so does Aurilio’s face, in solidarity with his boy. “Oh, man, he’s going to have a ‘bad’ afternoon.”  Aurilio looks out at Landon and the fields surrounding his new house in this strange town. “He had ‘so many friends back home,’” he says. “The first night here, I was awake and just kept thinking, ‘What the hell did I do to my family?’ ”

At the end of the day, he’s logged eight to nine miles on his pedometer.

He works 50 to 60 hours a week, taking as much overtime as he can while still being a good Dad and husband.

“You ‘always have to save for rain,’” says Aurilio, a sturdy 48-year-old man with a shaved head.

He was raised in McDonald, near Youngstown, a small town filled with flags and neighbors sharing cook-on-the-stove lasagna with friends down the street.

But it was a good job with benefits, building small cars for Chevrolet - first the Cavalier, then the Cobalt, and finally the Cruze.

If you’ve ever driven through Ohio on Interstate 80, you know where Aurilio worked.

For years, there was a Jumbotron-size billboard of the Cruze just off of the tollway, with a parking lot for 4,500 Employees.

Not that the factory was perfect.

Lordstown had no air conditioning, and in the hot, humid Ohio Summers the temperature on the assembly line could easily hit 100 degrees.

The factory had been the center of Labor unrest and Wildcat Strikes in the 1970s and it sometimes seemed like management still held a grudge.

The work was good, until it wasn’t.

The auto industry was cruelly cyclical and Aurilio would lose shifts when the economy tanked or gas was cheap and everyone bought SUVs.

There were ghost stories about how the plant was going to close almost every year, but in 2016 it was still here.

“When I started working there, people asked me ‘why I didn’t go to work at one of the steel mills,’” recalls Aurilio. “Then ‘they all closed down and I thought I was the smart one.’”

He laughs sadly: “I was for a while.”

Then Donald Trump got elected.

Trump had a lot of support among the Lordstown workforce, and Aurilio remembers a Co-Worker coming in the day after the election with his arms over his head, shouting: “Trump, Trump!”

Not coincidentally, that morning GM eliminated one of the shifts at Lordstown, Aurilio saw the guy again.

“How’s Trump working out for you?,” he asked.

To Continue Reading This Labor News Story, Go To: www.rollingstone.com/politics/politics-features/lordstown-auto-plant-trump-broken-promises-1073686/?fbclid=IwAR3pjg3HQAmbBeEzh0wDRhjNNv9p4jGBO9bWRzZV6Rk_XeXJN0RQ3MhhvgI

Look, this was a decision made in Detroit.

GM President Mary B is completely responsible for the plant closing.

She could have easily located other manufacturing components or products at Lordstown, but failed to do so.

GM, like Ford, is de-emphasizing sedan type vehicles in favor of SUV style vehicles, which are very popular now.

Could have the new electric Hummer line have been built there.

Could a gas or diesel version of the new Hummer been built there.

It all comes back as how we are going preserve our heavy industry plant resources in industrialized areas of the U.S. in largely Unionized plants.

A much bigger threat is the Green New Deal which will destroy millions of jobs in the steel, auto, coke, iron, mining and petroleum industries - most of these jobs being Union jobs.

We need to produce steel, coke, iron, tires, glass, autos and to refine petroleum products in this country in order to preserve our industrial economy and preserve Union jobs.

I find ironic beyond belief that those Green New Deal acolytes who are advocating closure of our Western New York Union power plants are ignoring the fact that the loss of Union jobs and municipal tax base will have a huge negative impact on our local economy - and to add insult to injury the generators, standards and blades for the so called wind farms that replacing our local power plants in Tonawanda, Dunkirk, Somerset and Dresden are being manufactured not in the United States by Union Workers - but in China and Germany.

Time to defend American jobs right here in Western New York. Posted by CE Speers on October 23, 2020 at 12:29 pm
The President should never have promised GM would bring another product to the assembly plant, but everyone should be responsible for themselves. Mostly all laid off Workers were allowed to work at other GM Plants. Wages and benefits are some of the best. Complaining about moving? My friend's Dad moved the family from Puerto Rico to Ohio to work in a steel mill. My Dad got laid off in 60's, so he drove from Ohio to Connecticut - every week. My father-in-law moved his family of nine from Pennsylvania to Ohio. My grandparents moved from Italy to America in 1900, took 2 weeks to travel. So, quit complaining. Posted by Gary on October 18, 2020 at 11:57 pm