âThe Response To This Health Crisis âWas Chaotic At Best And Life-Threatening At Worstââ - AFSCME-Represented Public Workers Says Senateâs âPriority Should Be On Funding Front-Line Workers, Not Fast-Tracking Anti-Worker Judgeâ 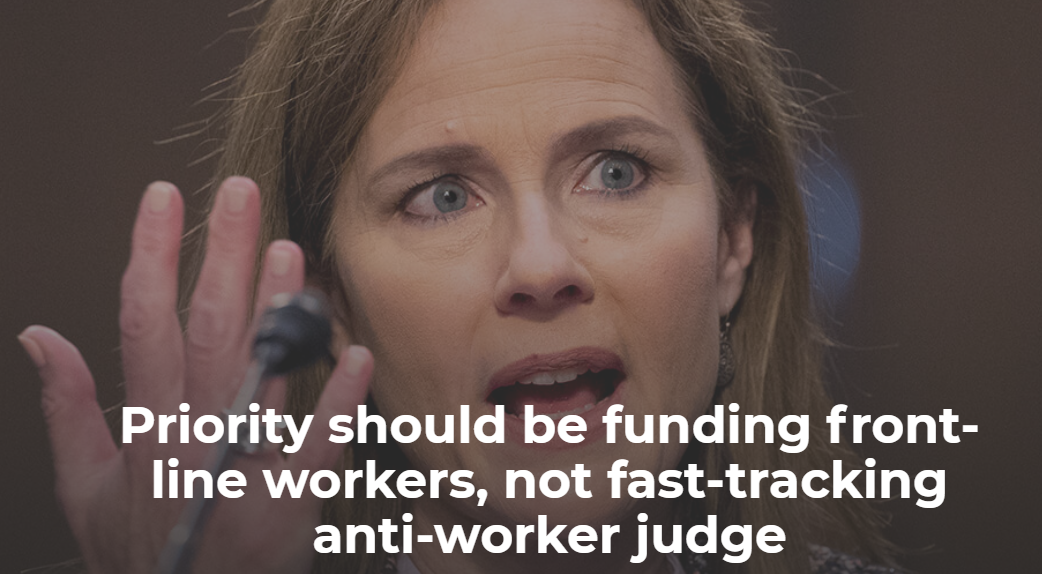 Mabe was joined by U.S. Senator Sherrod Brown of Ohio and Massachusetts Senator Elizabeth Warren, who both called on the Senate to prioritize funding for Front Line Workers who’ve been saving this country since the pandemic began, rather than ramming through Anti-Worker Judge Amy Coney Barrett to the U.S. Supreme Court.

“At the beginning of this pandemic, if you were a Public Worker, ‘it was like stepping into a war zone,’” recalled Mabe. “The response to this health crisis ‘was chaotic at best and life-threatening at worst.’  PPE ‘was either inadequate or not available at all.’  ‘And testing was a disaster.’  Ohio tested three prisons, ‘then quit, despite having the largest COVID-19 outbreak in the country.’”

“My wife and other OCSEA Members ‘have literally put their lives on the line for the safety and well-being for our community and this state,’” Mabe said. “And the ‘ones standing up for them wasn’t their employer and it wasn’t the Federal Government - it was our Union.’”

It was through the power of their Union that OCSEA Members, like many AFSCME Members across the country, were able to fight for the PPE and other protections they needed so they could continue serving their communities.

“That’s ‘why strong Unions and Union protections are so important right now,’” Mabe said. “It is ‘literally a matter of life and death for our Members.’  ‘We can’t risk losing these rights at a time when we need them more than ever.’”

As the Senate Judiciary Committee held a confirmation hearing this week for Coney Barrett, her record, which AFSCME President Lee Saunders characterized as “one of clear hostility to our Union’s core values,” threatens to undermine the power and protections Unions provide.

Republican President Donald Trump and Senate GOP Leader Mitch McConnell “have walked away from the negotiating table ‘and refused to extend’ (Unemployment) Benefits for the half-a-million Ohioans out of work, ‘refused to help people’ pay the rent and the bills, and ‘refused to get more money to our schools and small businesses,’” Senator Brown noted. “Their answer is to tell Ohioans ‘you’re on your own’ while ‘they move heaven and earth to put another Justice on the Supreme Court that will always side with corporations over Workers.’”

Senator Warren explained how the Coney Barrett nomination threatens much more than the rights of Workers alone: “If Amy Coney Barrett’s nomination ‘is rammed through, she will bring her Anti-Worker outlook to the highest court for generations to come.’”

Warren added Coney Barrett would overturn the Affordable Care Act “and devastate health care for Workers, especially the millions who lost their jobs during the COVID-19 Pandemic along with their health insurance.”

Rather than speed through Coney Barrett’s nomination while the election is already underway, the Supreme Court seat that fell vacant when Justice Ruth Bader Ginsburg died should be filled by the winner of the November 3rd Presidential contest - which is what most voters want.

To Directly Access This Labor News Story, Go To: www.afscme.org/blog/priority-should-be-funding-front-line-workers-not-fast-tracking-anti-worker-judge