âItâs A âGood Example Of Organized Labor Giving Back, Above And Beyond - It Sets The Toneââ - IBEW Local 237 & Its NECA Contractors Jointly Make A $13,000 Donation To The United Way Of Greater Niagaraâs Annual Fundraising Campaign 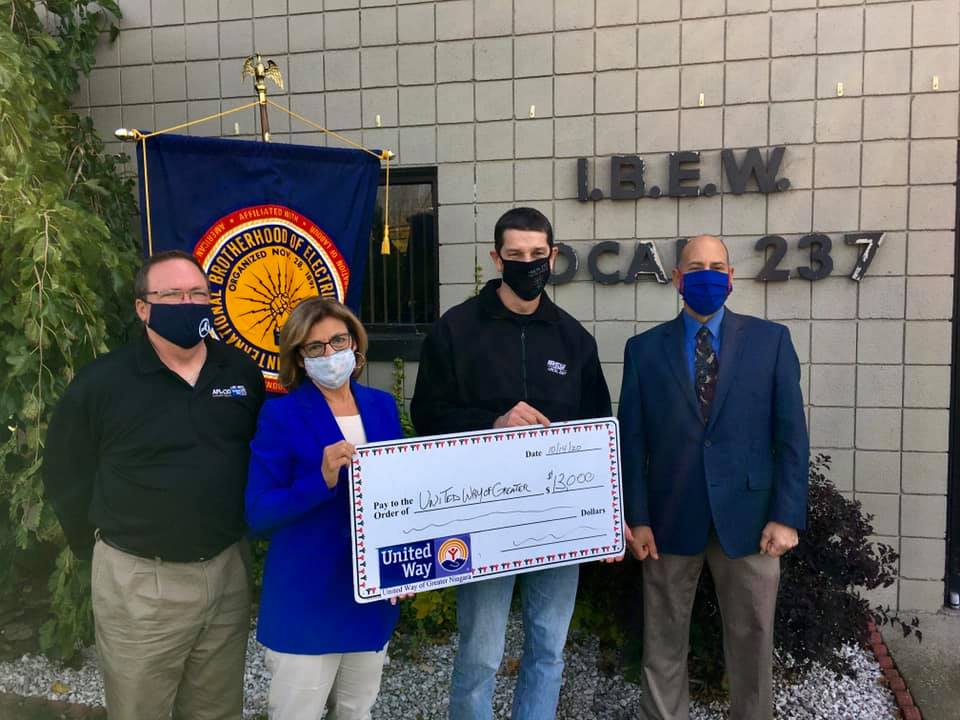 (NIAGARA FALLS, NEW YORK) - With a check made out for $13,000, International Brotherhood of Electrical Workers (IBEW) Local 237 became the first Niagara County Labor Union to make a large public donation to the United Way of Greater Niagara, which recently kicked off its annual fundraising drive.

“It’s our ‘first’ contribution (from Labor) and it is a ‘good example of Organized Labor giving back, above and beyond - it sets the tone.’  ‘I cannot say enough about this,’” United Way Labor Liaison Bill Jakobi told WNYLaborToday.com after he and United Way of Greater Niagara President and CEO Connie Brown accepted the donation that was jointly made by Local 237 and its contractor group - the National Electrical Contractors Association (NECA), on Wednesday (October 14th) at the Union’s Niagara Falls headquarters.

During these challenging fundraising times in the era of the COVID-19 Pandemic, the United Way has set a goal of reaching $1 million - which will help it and its 29 partner agencies across Niagara County that aid and provide a number of important services for people in need - including Working People and Essential Workers.

And, traditionally, it is Organized Labor that has played a historical role in annually helping to raise about 40% of the overall fundraising goal through payroll deductions and donations like the one that was made at the IBEW Local 237 Union Hall.

“We’ve been doing this since the (1990s - making a joint contribution to the United Way),” Local 237 Business Manager John Scherrer told Your On-Line Labor Newspaper. “Our Labor-Management Group agreed to put in five cents an hour to a separate United Way fund ‘because this is so very important’ (to the Niagara County Community).”

“We’ve been ‘historically engaged’ with the United Way ‘for many generations and giving back and supporting the needs of the community fits in with our mission,’” Freedman said.

The United Way says the lives of 135,000 Niagara County residents have been improved through funding to its partner agencies on a yearly basis and that 85 cents of every dollar raised by the non-profit stays local - which is an important point to make when seeking donations.

“The relationship between the United Way and IBEW Local 237 ‘is a great partnership,’” Brown said.  “We ‘appreciate’ their donation, ‘especially in this time of COVID, which stays in Niagara County and the City of Tonawanda.’  This money ‘is important because it helps so many.’”

In Niagara County, NECA provides management services to signatory IBEW Electrical Contractors, “about (20), including a core group of (10),” according to Freedman.

IBEW and NECA have also contributed a number of “in-kind” services and volunteer donations of time to the United Way of Greater Niagara over the years, both Scherrer and Freedman said, including participating in the United Way’s annual Day of Caring event (which was put on pause this year because of the Coronavirus Pandemic), the Holiday Lights display at Hyde Park and the annual Clean Sweep beautification effort in Niagara Falls.

“Its ‘nice to be able to call’ (the IBEW and NECA) when we need extra supplies for something - and there they are,” Brown said.

Asked if IBEW Local 237/NECA joint contribution to the United Way of Greater Niagara would motivate other Unions - as well as Labor-Management Groups, to do the same, Jakobi answered: “I hope so.”

NECA’s goal - through the IBEW and its Membership, is to provide safe, quality and professionally-installed electrical work to both the public and private consumer.

Through cooperation with its IBEW counterparts, NECA partners with the Union to provide training for both new Apprentices and continuing education for Journeymen that allow NECA Contractors to continuously employ the best trained Employees and insure the highest quality of electrical work to all customers - performing on time and on budget.

“Our Contractors and IBEW Members ‘are working through this COVID Pandemic,’” Freedman said.  “And there are ‘multiple risks in everything, but that’s the benefit of being in (the Unionized Construction Industry).’  (The training and safe working environment that the IBEW and NECA aspire to) ‘is a direct result’ (of what both groups strive to attain).”