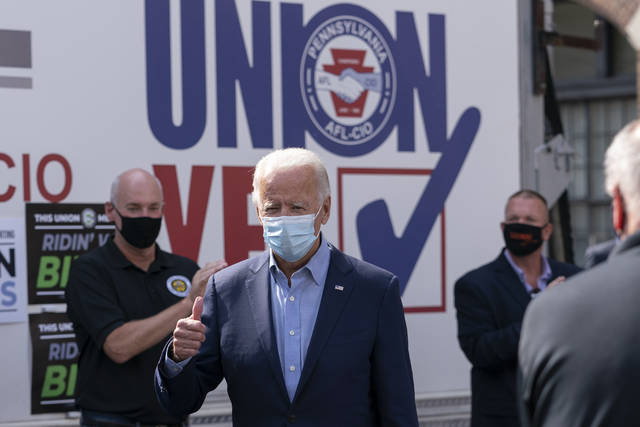 When Tenaris idled its Beaver County, Pennsylvania pipe-making plant and laid me off this Spring, I walked out the door with a lifeline - six months of employer-paid health insurance that enabled me to keep providing for my family.

The owners of Tenaris didn’t provide this crucial health care coverage to my Co-Workers and me out of the kindness of their hearts - but only because my Union, the United Steelworkers (USW), negotiated it.

It’s important to remember the Federal Officials we elect on November 3rd will wield enormous power over the right of Americans to join Unions and the ability of Unions to effectively represent the millions of Workers who depend on them.

At stake are not only fair wages and benefits, but also safe working conditions, discrimination-free workplaces - and even the decent treatment of Workers furloughed during recessions like the one America faces right now.

The real question is, how could Union Members support a President who’s spent the past four years attacking Workers - eroding our rights - at every turn?

Trump turned the National Labor Relations Board (NLRB) against the very people it was created to protect.

The NLRB’s corporate-friendly majority, nominated by Trump and confirmed by Senate Republicans, derailed Workers’ Organizing Campaigns, allowed employers to change working conditions in the middle of a contract and empowered companies to misclassify Employees as contractors to avoid complying with Labor Laws.

Through its General Counsel, Peter Robb, a notorious Union-Buster since the failed Reagan Administration, the NLRB even supported the firing of Health Care Workers who raised COVID-19 safety concerns.

These attacks on Workers occurred as a growing number of Americans, including Professors like Kengor, seek the benefits and protections that Unions provide.

Time and again, Trump showed nothing but scorn for Workers’ safety.

But the Trump Administration callously opted to let employers devise their own procedures instead.

As a result, thousands of Workers died because of safety lapses at nursing home, meatpacking plants, grocery stores, warehouses and other workplaces.

To Continue Reading This Labor Perspective, Go To: https://triblive.com/opinion/mike-a-sabat-iii-heres-why-union-members-support-biden/?fbclid=IwAR1LWttArlCqmeMwQTFQ_vs9o7RuYnCZLa1VgGnb19riZu6tR20kBB0lboA