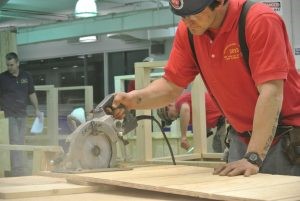 (NEW YORK CITY) - The Building and Construction Trades Council of Greater New York is launching an effort to coordinate the work of four groups that recruit Apprentices from the city’s poorer neighborhoods and among Women, Veterans and Black and Latino residents.

The announced Apprenticeship Readiness Collective will formally bring those different groups with similar missions under one umbrella, a Building Trades Council spokesman told LaborPress.  It plans to set up programs by the end of the year, he said.

The four groups are: The Edward J. Malloy Initiative for Construction Skills, founded in 2001; Nontraditional Employment for Women, which has brought Women into the Building Trades since 1978; New York Helmets to Hardhats, which has brought more than 3,000 Veterans into the industry since 2003; and Pathways to Apprenticeship, founded in 2013, which specializes in recruiting Workers from low-income communities, many of whom have arrest records.

The other three groups run Pre-Apprenticeship Programs, which teach skills such as carpentry, electrical work and painting, as preparation for entering Union Apprenticeships.

The Building Trades Council said the newly-formed collective would “serve as the go-to resource for direct-entry and Pre-Apprenticeship recruitment” for its affiliated Unions.

The four groups will continue to direct and lead outreach and recruitment efforts to the specific populations they serve.

“Now, more than ever, Pre-Apprenticeship and direct-entry programs are not only critical to the future of New York construction, but also to the economy of our entire state,” BCTC President Gary LaBarbera said in a statement. “With the formation of this first-of-its-kind program in North America, and with direct outreach to the diverse communities hit the hardest by the (Coronavirus) pandemic, the BCTC will create unique Middle Class opportunities for Veterans, Women and Minority residents of New York City.”

The system will also help the Building Trades Unions reach the goals of a Project Labor Agreement (PLA) they reached with the city in August.

The deal covers renovation work on city-owned buildings and selected city new-construction projects in the future, and will “serve as a template for other city PLAs,” the mayor’s press office said at the time.

Under the agreement, contractors that sign on to the PLAs are generally required to hire Union Workers and use Union Referral Systems.

When they request Apprentices, the Unions will supply them, up to the maximum number of Apprentices allowed on a job by the New York State Department of Labor.

However, there is a provision that sets aside work for Non-Union contractors that are owned by Minorities or Women.

The city agreement’s goal is that at least 30% of all hours worked on projects covered by it should be done by Workers who live in ZIP codes where at least 15% of the population either lives on an income below the Federal Poverty Level or resides in public housing.

To Continue Reading This Apprenticeship And Training Labor News Story, Go To: http://laborpress.org/ny-building-trades-launch-apprenticeship-readiness-collective/