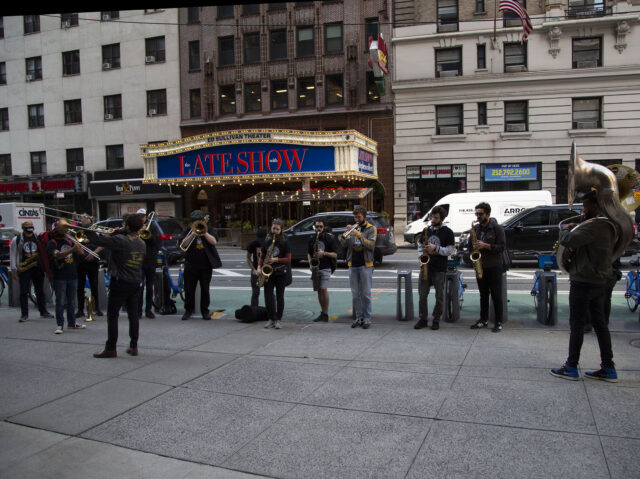 (NEW YORK CITY) - More than 75 American Federation of Musicians (AFM)-represented Members joined together in front of the Ed Sullivan Theater earlier this week (on Tuesday October 6th) to call out CBS and the other Television Networks as Musicians escalated efforts to secure a fair contract, gain wage increases, broader health care coverage, and secure residuals for streaming usage.

After years of attempts to achieve balance and fairness in the Broadcast Television Industry, a majority of the House Band Musicians (represented by the AFM) have signed an Open Letter to the Networks calling on ABC, CBS and NBC to create true pay parity for the Musicians and dismantle the structural racism that still runs rampant in the Television Industry.

“The networks ‘recognize our music elevates the quality of their shows and they are more than happy to use our sound and images to enhance the brand of everything they do,’” said Jon Lampley - a Trumpet Player with the Stay Human House Band at The Late Show with Stephen Colbert.

“So ‘often we are celebrated for bringing diversity to the screens that we grace–both with our faces, and with our music, yet - behind the scenes we are being told that our contributions aren’t worthy of a fair deal.’  The networks ‘rejoice’ when we, the musicians, can add ‘culture’ to these shows ‘that are written and hosted predominately by White Men, but off camera they’re unwilling to grant us the economic parity that we rightfully deserve,’” Lampley said.

While streaming residuals are granted to Actors, Singers, Writers and others in the industry, the Musicians performing on the same shows receive no residual payment for music that is being monetized and featured on streaming platforms, significantly lowering Musicians’ overall pay.

The #RespectUs rally continued with a musical march down Broadway, concluding in front of the ABC Studio in Times Square.

AFM Members from Los Angeles to New York continue to strengthen a national Member-led campaign as negotiations were set to resume this week.

To Directly Access This Labor News Story, Go To: www.afm.org/2020/10/tv-musicians-rally-march-through-times-square-to-demand-a-fair-contract-from-abc-cbs-nbc/?fbclid=IwAR3uqWzKEaf86ouPmJkBS-KQTgmShbMdOiD5c-MHMKK4YGdJwDYZ_ELNN6w&link_id=8&can_id=d28a0e75022b91d73fc95bc86b686390&source=email-union-matters-october-2-2020-2&email_referrer=email_951952&email_subject=union-matters-october-9-2020