New York Citys Workforce In The Face Of COVID-19: Were Still At Risk! 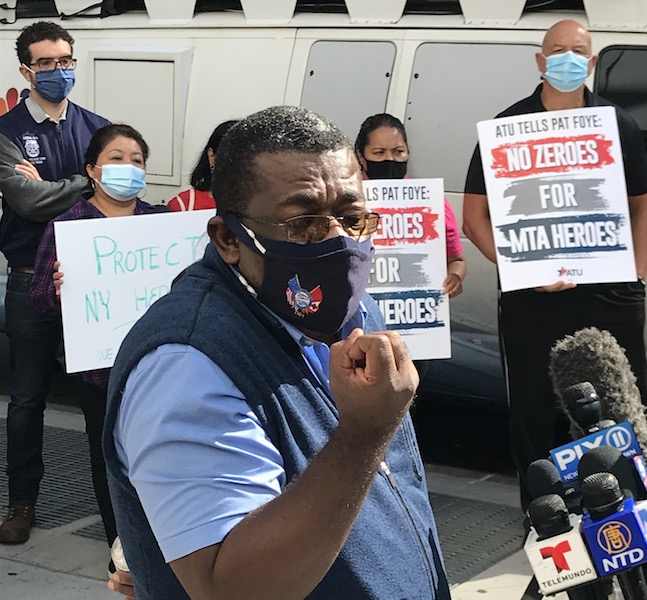 “Who are the experts when it comes to safety in the workplace?  ‘The workers,’” Teamsters Joint Council 16 President George Miranda told the about 35 people and a couple dozen reporters who assembled outside the Lenox Health Greenwich Village Clinic. “They are ‘sounding the alarm because they are not safe.’  ‘We all know the second wave is coming.’”

Employers who retaliate against Workers who complain about unsafe conditions can’t be trusted to enforce standards themselves, she added.

“Every industry in New York State ‘needs to have some kind of standards to protect their Workers,’” said Assembly Member Karines Reyes (Democrat-Bronx), who’s putting together a Bill that would set Contagious Disease Standards for different industries in New York, with committees of Workers having a voice in creating them.

That measure would have mandated that the New York State Departments of Labor and Health implement minimum standards for workplace safety, enforceable through significant fines, with Workers having Health and Safety Committees with the power to raise complaints and report violations without retaliation.

“A lot of industries ‘don’t have protocols’ for communicable diseases,” including retail, restaurants, and manufacturing, Reyes told LaborPress.

The Worker Committees are the most important part of the Bill, she added, because they would give Non-Union Workers a voice they don’t currently have.

The measure won’t see any action until the State Legislature returns in January, she says.

It hasn’t gotten a Bill number yet and its supporters are still working out its language.

It’s important the legislation have teeth, she explains, but not be so strict that it’s unenforceable, and the State Department of Labor needs to have the resources to enforce it.

“It ‘should have happened a long time ago,’” Retail, Wholesale and Department Store Union (RWDSU) Member Beena Martinez told those at the rally.

Her brother got infected with COVID-19 while working in a nursing home last Spring and she and their mother got it from him.

Her mother died from it.

The HEROES Act, a National Stimulus Package Bill passed by the House in May, would have required the U.S. Occupational Safety and Health Administration (OSHA) to establish and enforce an emergency temporary standard to protect Workers from occupational exposure to airborne infectious disease, but the Republican Majority Senate has refused to consider it - and Republican President Donald Trump announced this week he was cutting off negotiations on stimulus proposals until after the election.

To Read The Rest Of This Labor News Story, Go To: http://laborpress.org/nyc-workforce-in-the-face-of-covid-19-were-still-at-risk/