Bright Horizons Leaves Students Favorite Teachers Out In The Cold 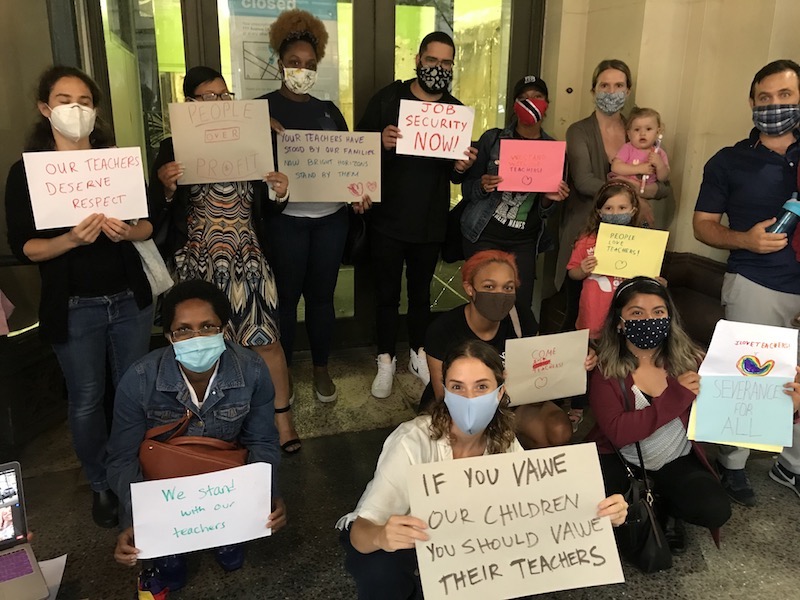 (NEW YORK CITY) - As a group of Teachers facing layoffs tried to negotiate better terms with the Bright Horizons chain of child-care centers just before the start of October, a group of parents, children and other Teachers milled about under a construction scaffold outside on West 23rd Street.  A little girl sat in a stroller holding a sign that read: “I Love Teachers,” with a rainbow sign under it.  When the Teachers emerged shortly after 5 p.m., they had bad news.

“We had three questions that we raised, and we got a ‘flat no across the board,’” Darralyn McQuitter, a Teacher at Bright Horizons’ Fedkids Center at 26 Federal Plaza in Manhattan for the past nine years, told about 20 people in attendance.

Bright Horizons, which runs more than 700 Child Care Centers in the U.S., informed workers in early September that it was withdrawing from 14 of its 29 contracts to run centers for Federal Workers’ children, including those at 26 Federal Plaza and 101 Willoughby Street in Downtown Brooklyn.

The 60 Teachers employed at the two centers were given until September 30th to decide if they wanted to apply for jobs at other Bright Horizons centers in the city or with Imagine Early Learning, the company taking over at the two centers.

The Teachers, with organizing help from the Democratic Socialists of America’s Labor Branch and the United Electrical Workers Union, are demanding that Bright Horizons and Imagine Early Learning guarantee them new jobs, severance pay for one or two months “until we are able to start at a new center,” and pay for accrued vacation and sick time.

Bright Horizons’ negotiators agreed to give them vacation pay, but nothing else, they said.

“We were told that they would ‘only consider us,’” Jazmin Rendon, a Teacher at 26 Federal Plaza for three years, told LaborPress.

She’s thinking about applying to both companies, “but there’s no guarantee for either.”

“We ‘feel a guarantee should be our right.’  ‘They were the ones who broke the contract,’” she added. “What ‘we’re asking for is not impossible.’”

The company negotiators, said Teacher Mayra Reyes, also claimed Teachers had already received severance pay in early April, when all furloughed Employees got two weeks of “bridge pay” after the centers closed because of the COVID-19 Pandemic, to cover the gap between their last paycheck and their first Unemployment Benefits check.

“They ‘didn’t give us any answers when we asked, How is that severance pay?,’” said Reyes, who taught two-to-five-year-olds. “How ‘can a company that prides themselves on putting students first put their Teachers last?’”

To Directly Access This Labor News Story, Go To: http://laborpress.org/bright-horizons-leaves-students-favorite-teachers-out-in-the-cold/