USW District 4 Deals With Second Plant Closing Notice In Recent Months: Tonawandaâs Greif Incorporated - While This Situation Is A âLittle Bit Betterâ To Handle, The Union Is Actively Seeking Alternative Local Employment For Its Displaced Members 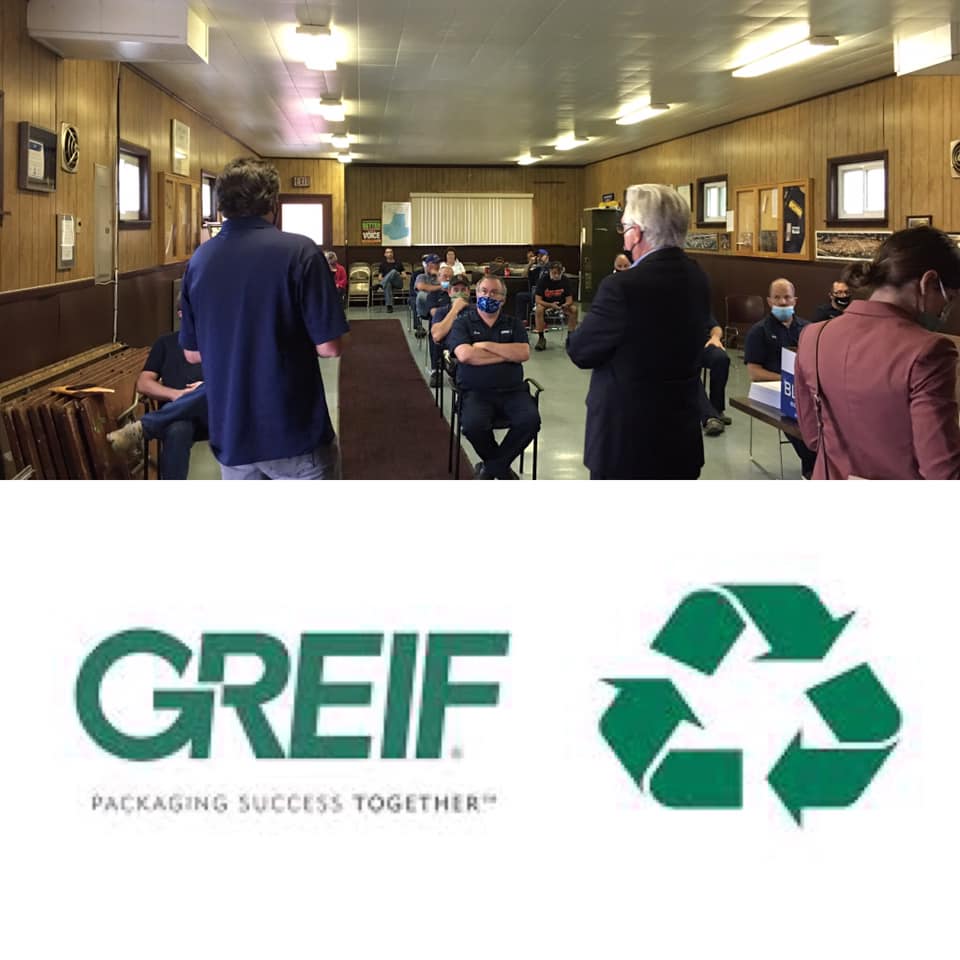 (TONAWANDA, NEW YORK) - For the second time in recent months, United Steelworkers (USW) District 4 and its Western New York-based Staff are dealing with a plant closing that negatively impacts a number of its locally-represented Members.  But unlike the announced closing and controversy surrounding Dunkirk’s REM-tronics plant back in August, the shutdown of Greif, Incorporated’s Tonawanda Industrial Packaging and Container Manufacturing Facility has been a little bit better to handle - if that’s possible.

Many of the 34 impacted USW Local 4-607 Members employed at Greif, who’d worked at the company from one year to nearly 40 years, met recently (Pictured Above & Below/WNYLaborToday.com Photo) with Union Representatives and Workers Compensation Attorneys – who briefed them on a number of their rights, including what to do about any hearing loss they’d suffered over the years while working inside the plant, as they continue to prepare for the final shutdown, which is expected to occur in December.  A round of Workers were let go in September and another round will take place in a week or so from now, USW Officials said. 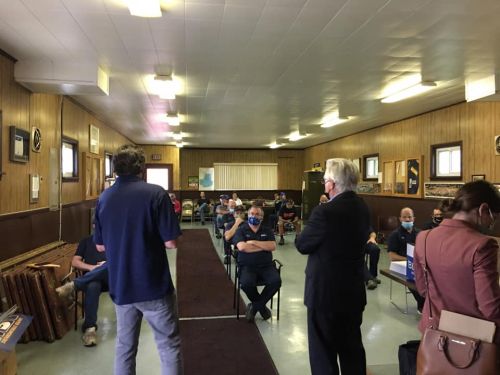 “It ‘was a surprise,’” said USW Local 4-607 Union Steward Jim Waliszewski, who spoke to WNYLaborToday.com during that recently-held meeting.  “Supposedly, the company ‘was making a ton of money and the plant was running very efficiently.’  ‘It was very productive.’  Now, it’s a ‘tough situation,’ like ‘dead man walking’ - ‘now you come in and just do your job.’”

“High shipping costs” is one of the reasons Greif says its moving its local production to another one of its plants in the State of Ohio, USW Reps tell Your On-Line Labor Newspaper.

While not happy with the final decision, USW District 4 Sub-District Director Jim Briggs said “thankfully” the work is staying in the U.S. and will not wind up in some foreign country.

“I ‘don’t agree with the way they handled it, but at least the work did not go away.’  ‘The bottom line is that this was the company’s decision that we had no control over,’” USW District 4 Sub-District Director Jim Briggs told Your On-Line Labor Newspaper.

“As soon as we knew, as a Union, ‘we tried to pursue avenues to keep the company open, but the company has stepped up with a fair severance package’ (for the impacted Workers).  ‘We appreciate it when a company does the right thing for our Members, not like REM-tronics.’  ‘That’s the level of respect Greif had for their’ Employees,” Briggs said.

For example, Waliszewski said some Greif Workers will receive up to 18 weeks of pay.

“It ‘was a shock because it was business as usual and the Membership was taken by surprise because we were heading into negotiations’ (on a new contract).  Our three-year (deal) was ready to expire in September (2020) and they notified us (of the closing) in July.  ‘At least the company was willing to work with us,’” USW District 4 Staff Representative Joe Vertalino told WNYLaborToday.com.

“We were able to ‘successfully negotiate a severance package and (the company) will continue the Workers’ health care (coverage) until the end of the year.’  ‘But it’s still hard.’  Some have worked here (20 to 30) years.  Some got their jobs ‘right out of high school.’  ‘These have been life-sustaining jobs for themselves and their families and they had dedicated their lives’ (to their jobs and the company),” Vertalino said.

Briggs said the USW is working to find alternative employment for the Greif Workers in other USW-represented plants located across the Western New York Region.

“I’m ‘proud of the way the USW is going out (and looking for alternative employment for its Members) at other USW locations.’  ‘We don’t forget our Members,’” he said.

This is the second plant closing that USW Staff Rep Brigitte Womer has been involved in this year, including REM-tronics.

The USW-represented Employees of Gowanda REM-tronics in the Chautauqua County City of Dunkirk worked through the Coronavirus Pandemic as Essential Workers for the contract manufacturer of highly-reliability products for the aerospace, industrial, medical and military industries.

In essence, they agreed to put their health on the line for a company that now says it’s closing because of the pandemic - which company officials say has negatively impacted the avionics and fiber optics sensor markets.

But that didn’t stop Rem-tronics from successfully applying for, with the help of their Union-represented Workforce of 70 - who personally filled out form letters at the request of the company to eventually help gain approval of Federal Stimulus Funding for their Western New York Facility.

Adding insult to injury, the company announced in August that it was moving its Western New York operation to a Non-Union Plant in the Right-to-Work (for less) State of Kansas.

While the REM-tronics closing has been extremely stressful because of the way it took advantage of its Workers to secure Federal Stimulus Dollars and then announced the facility’s closing, Womer said Greif has handled the situation better than REM-tronics.

“At REM-tronics ‘they told us over the phone (they were closing) and there were no’ severance packages.  ‘I don’t know if Greif was more apologetic, but they were more cooperative - but their decision was made.’  ‘They were not contentious.’  ‘They were polite,’” she said.

In regards to REM-tronics, the USW is asking for the company to provide its displaced Workers with severance packages in light of the fact it successfully received Federal Stimulus Dollars that their Employees had played such a significant role in.

“REM-tronics ‘has been unremorseful and they seem to not care,’” said Womer, adding the average of amount of Federal Stimulus Dollars amounted to $9,000 per Worker.