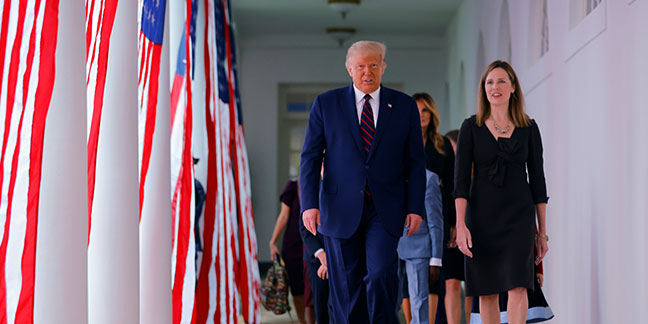 “Judge Barrett’s record demonstrates a clear disdain for Workers’ Rights and her confirmation would push the most corporate-friendly Supreme Court in history further into the pockets of the wealthy elite,” National AFL-CIO President Richard Trumka said. “Working People’s wages, health care, job safety, Civil Rights and freedom to form a Union will all be undermined if she is confirmed.”

Barrett, said American Federation of State, County & Municipal Employees (AFSCME) President Lee Saunders, has “defied the intent of the Civil Rights Act of 1964 by rubber-stamping a corporate racial-segregation scheme.  She has sought to undermine protections for older Workers and she has made it harder for Gig Workers to sue their employer for overtime pay.”

Saunders called her nomination “an insult to the legacy of Ruth Bader Ginsburg, a trailblazer for justice.”

“She doesn’t have a huge record, but it’s uniformly Right-Wing,” says Adam Shah, Senior Policy Analyst at the Jobs With Justice Coalition.

The most important indicator, he says, is that the Koch Brothers’ front group Americans for Prosperity is mounting a campaign to win support for Barrett’s nomination.

“They’re not doing that because of her record on abortion, which is terrible,” he told LaborPress. “They care about what they know she’ll do on business issues.”

Barrett, 48, was appointed by Trump to the 7th Circuit Court of Appeals, which covers Illinois, Indiana and Wisconsin, in 2017.

A Law Professor at Notre Dame University since 2002, she had no previous judicial experience, but had become a favorite of the Christian Far-Right Movement for her opposition to legal abortion.

If confirmed, Barrett would also become the third Justice on the Court, after Chief Justice John Roberts and Brett Kavanagh, to have worked for the Republican side on Bush v. Gore, the 2000 decision that stopped a recount in Florida and handed the election to George W. Bush by a 5-4 party-line vote.

She was part of the team from a major Washington Law Firm hired by the Bush campaign.

The Court’s rationale was that counting thousands of ballots that voting machines had been unable to read would be unfair to Bush, because different jurisdictions would use different standards to determine whether the voter’s intent was clear.

In her three years on the Seventh Circuit, Judge Barrett has been involved in a handful of Labor-related cases.

In 2017, in United States EEOC v. AutoZone Inc., she joined the majority in refusing to rehear a Black AutoZone Worker’s appeal of a decision that it was not discrimination for the company to transfer him from a “Hispanic” store in Chicago to a “Black” store.

In 2019, in Kleber v. CareFusion Corp., she joined the majority in ruling that Federal law protecting Employees from “disparate impact age discrimination” does not cover outside job applicants.  The case involved a 58-year-old Lawyer who did not get a job interview at a company that was not considering applicants with more than seven years of experience.

To Continue Reading This Labor News Story, Go To: http://laborpress.org/barrett-nomination-looms-ominous-for-labor-law/