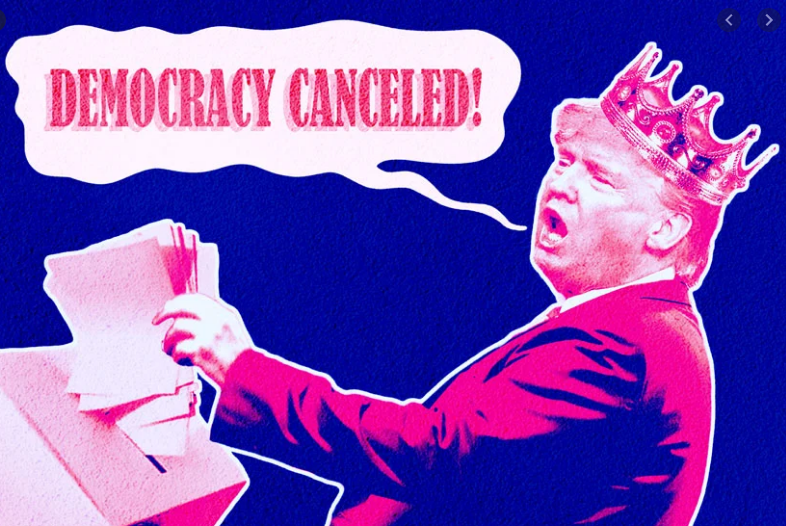 By now it is as clear as the nose on your face that Donald Trump is preparing to seize power whether he wins the 2020 election or not.

Further, Biden/Harris is ahead in the key states of Wisconsin, Pennsylvania, and Michigan by 6% - on average.

Biden/Harris is statically tied with Trump in Florida, North Carolina and Georgia and Arizona, also states that Trump won in 2016.

By every measure the race favors Biden/Harris and Trump knows it.

For this reason, he is turning to the weapon that failing tyrants have always used throughout history - lies, demagogic appeals to racism, ultra-nationalism and threats have become his everyday techniques.

He uses these methods because they are time tested and rooted in the history of this country.

The idea that African-American People are a “lesser” race is based in chattel slavery.

This view infects every aspect of American life - it is an endemic problem.

It breaks up Working Class unity in the fight to defend living standards and working conditions and must be opposed at every juncture.

An ancient proverb says: “The drowning man will grasp the edge of the sword to keep from going under”.

Trump is certainly employing this method.

The real question is, will it work?

Will this would be dictator continue to disregard and dismantle the Democratic Constitution of the United States?

Will his enablers in the Republican Party continue to acquiesce in his power-play?

Recently, Trump declared that he may not hand over power peacefully.

Will the leaders of the Republican Party allow a coup d'état, will they sit back and create rationale for the bloody end of this country’s Constitutional Republic?

The House of Representatives passed a bi-partisan bill, called The Heroes Act in mid-May.

No real attempt has been made to find a compromise out of the Senate.

Mitch McConnell has literally done nothing to address the terrible economic and fiscal results of the COVID-19 Pandemic.

People are without work, governments are starving for revenue and Front Line Workers need PPE (Personal Protection Equipment) and the only thing heard out of McConnell is that a new Supreme Court Justice will be voted on before the end of Trump’s first term.

What could be more clear?

To Trump and his enablers, it is crucial to add a Justice to the Supreme Court in a Presidential Election year.

The extra vote aims to make sure Trump wins a legally-contested election.

Yet, real legislation to save lives goes languishing for nearly six months.

What more needs to be said?

The priorities of the Republican Senate have nothing whatsoever to do with the reals needs of Working People.

These are difficult conditions - but, we must not give up.

Trump wants us to become so frightened that we will be paralyzed.

Oppose his racist and ultra-nationalist rhetoric by pointing out that Working People must be united in struggle for a better world.

We must continue to fight for every vote until Trump and his enablers lose their grip on power.

Join us, organize for victory on November 3rd and be prepared to defend that victory in the days thereafter.