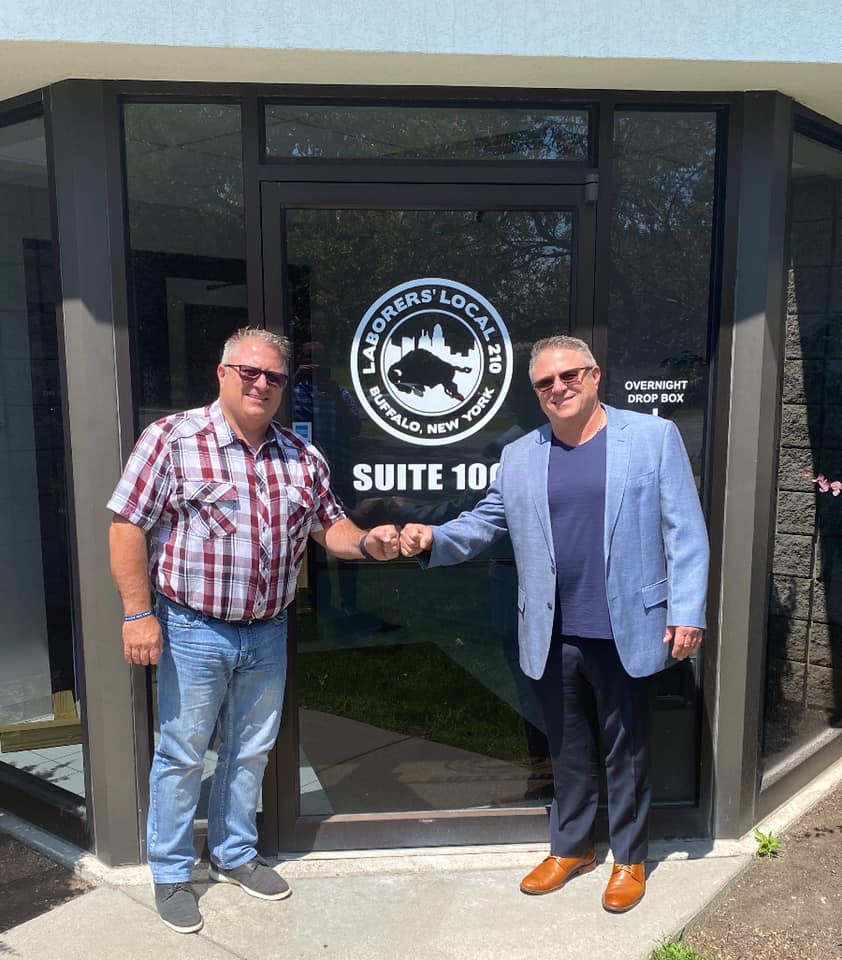 WNYLaborToday.com Editor’s Note: Pictured above, the sons of Peter Capitano - identical twins Peter (on the left) and Sam (on the right), are guiding Laborers Local 210 into the future.  WNYLaborToday.com recently sat down and talked with the Brothers about the Union Legacy their Father left at the Buffalo Laborers Union Local and how they are following in his footsteps, using his knowledge of the construction industry, and life, that he imparted on them.  (Photo Courtesy of Peter and Sam Capitano)

(BUFFALO, NEW YORK) – Even though Peter Capitano passed away from cancer several years ago, he’s still with his twin sons, say both Peter and Sam, the Union Brothers who have and are continuing to help lead and guide Laborers Local 210 today and into the future.

Sam and Peter - who are identical twins, born just eight minutes apart on March 30th, 1966, recently sat down - individually - to speak with WNYLaborToday.com about their Father’s Union legacy and how they are following in his footsteps, while leading the Buffalo-headquartered Building Trades Local into the future.

“I ‘think of him all the time and I hear his voice - every day,’” said Sam, the former Local 210 Business Manager who is now a Special LIUNA (Laborers International Union of North America) International Rep for the Northeast Region, told WNYLaborToday.com.

“I ‘saw all the good he did along the way, (for Local 210’s Members) ‘and I took a lot of that from him - in the negotiation process, through compromise and adding value.’  ‘I cannot stress it enough - it’s what he made me,’” said Sam, who also serves as Local 210 President.

WNYLaborToday.com Editor’s Note: Pictured below, Father Peter Capitano on the far right, with sons, Sam, on the far left, and Peter, in the middle.

“My Dad was the ‘only one’ (of the Representatives at the time that he served the Local) who ‘came out of the field,’” son Peter, who has been Local 210’s Business Manager since 2019 and also serves as a LIUNA District Delegate, told Your On-Line Labor Newspaper.

“The Members ‘took a liking to him’  ‘He went out of his way for everybody and found a place (job) he could fit (Members) into.’  Retirees ‘still tell me: If it wasn’t for your Dad I’d be broke with no Union Book.’  Some had (30) years in (the Trade).  I get ‘goosebumps.’  And, ‘he never held a grudge.’  He ‘always wanted (the Members) to succeed.’  He ‘didn’t see color or race.’  He ‘stood up’ for the Members who ‘didn’t have a voice’ and he ‘changed this Union’ to where ‘you wanted to be involved - and that carried into my Brother’s leadership,’” Peter said.

Peter Capitano (Pictured below on the far light with his sons/Photo Courtesy of Sam Capitano’s Facebook Page) became a Local 210 Member in the mid-60s after his soon-to-be father-in-law, Peter Adamo, a Member of Local 210 himself, told him: “If you’re going to marry my daughter, ‘you better have a job.’” 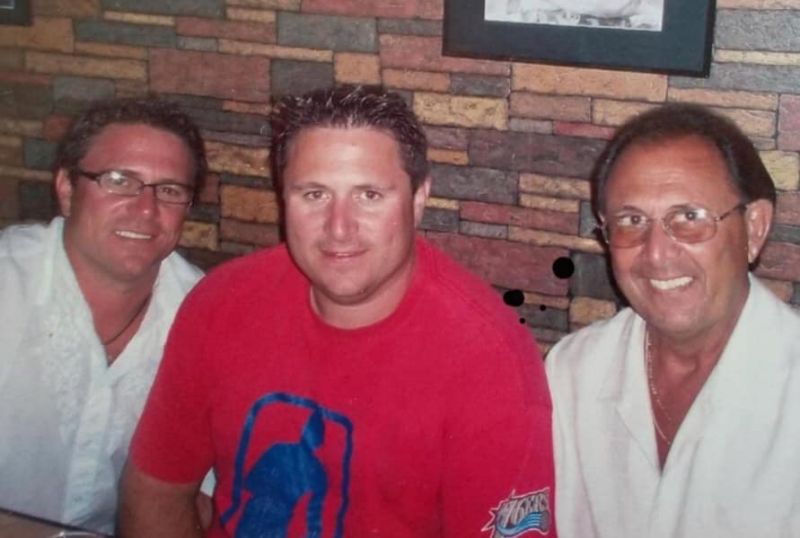 So from 1965 through 1991, Peter Capitano worked out in the field before becoming a Union Steward in the early 80s and then rising up in Local 210 to become a Business Agent in 1991.  He also served as the Union’s Secretary-Treasurer for some time.

“My Dad was ‘very instrumental’ in getting a PLA (Project Labor Agreement) for the Roswell Park Cancer Institute Project in the nineties (the first time a PLA was used on a Buffalo Construction Project).  He was a ‘quite a Rep, but he had an old school mentality - he stuck to his guns, but he was flexible.’  ‘He was also reliable and he had a sense of humor that was insane.  His ‘personality was so profound.’  ‘And - he could tell a story,’” Sam said.

Just as Sam remembers, Peter - who became a Local 210 Member 37 years ago, grew up listening to “jobsite stories” during Sunday dinners at his grandparents’ home.

At the age of 17, in 1983, he started his Union career mixing mortar and was “caught completely off guard” on how much knowledge his father displayed on the job on a daily basis.

“There were fifty Laborers working on a job at UB (the University of Buffalo) and he was there running that job, ‘with a lot of other’ Trades out there.  ‘He always knew who was working where.’  ‘Looking back, I wished I paid a little better attention,’” Peter said.

Even though he had started working as a Laborer, Peter still had designs on going to school and getting a degree: “When I started (working with the Union), ‘I didn’t think it would be a (life-long) living.’  I did take some classes at UB, but my Dad called me up and told me to ‘scrap that.’  ‘Heck, I was making over ($1,000) a week at the age of (23).”

As Business Agent, Peter Capitano helped grow - through negotiations with the AGC (Associated General Contractors), the Laborers’ hourly rate, which went from $13.75 to $17.50, a $4-an-hour increase.

“Our Members said: ‘Are you serious,’” son Peter recalled.

However, it was in the 90s that the Local was investigated by the Federal Government for charges stemming from alleged “ties with organized crime.”

Soon afterward, the Buffalo Laborers Local found itself placed under trusteeship for several years until the early 2000s.

While Peter Capitano had fingers pointed at him by the Federal Government, he was never charged with any formal crimes, his sons said.

“They ‘portrayed’ my Dad as a ‘mobster, a criminal.’  ‘He didn’t handle it well, but he still had his pension,’” Sam said.

So after 41 years with the Local, Peter Capitano retired in 2006.

“He ‘left a legacy - he was a man of the people and everyone knew it.’  ‘He came out of the field and he knew the issues.’  ‘He got his support from Working People,’” Sam said.

Peter Capitano passed at the age of 73.

He had battled pancreatic cancer since 1996.

Peter Capitano was a “three-pack of cigarettes a day guy,” Sam said, but quit cold turkey the day he went into the Roswell Park Cancer Institute, where he had helped negotiate a PLA, for his first day of treatment.

“But ‘he lived every day and he was the best cook in the city,’” Sam said with a laugh.

When his father’s life was coming to an end, he was admitted to a local hospital.

Sam’s Mother, whom his Father had divorced when the boys were very young, prepared him some cardoons (a traditional Italian vegetable dish served steamed or braised, which have an artichoke-like flavor) and instructed Sam to take to the food to his Father in the hospital.

Looking back, Sam recalled a number of warm memories of growing up and listening to his Father tell stories.

One of those jobs was at the University of Buffalo where Peter Capitano came up with the idea that he would have both his young sons work the same job - splitting the overall shift, under the same name, Peter.

Said Peter: “It was the ‘first time’ I worked on a construction site, but the contractor ‘wouldn’t believe (my Father, that his twin sons worked the same job).’  ‘He just didn’t believe him.’”

To prove the story, Sam rifled through a nearby pile of papers and pulled out an old Buffalo News photo (pictured below) that shows his father and Peter checking out the plans for what was then UB’s new School of Management, which was being built in the Buffalo Suburb of Amherst. 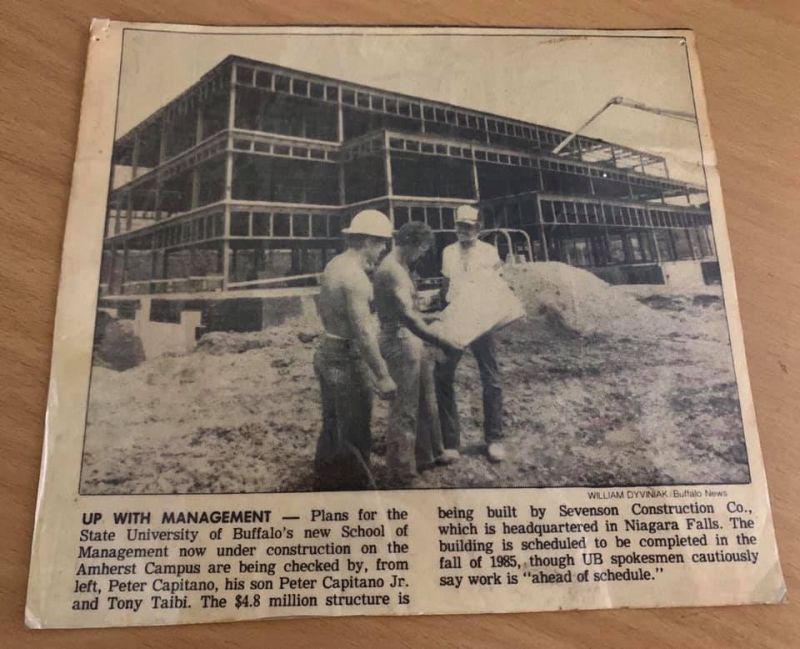 Never thinking he had a chance, Sam ran for Business Manager in 2007 and won by 22 votes.

With what he had learned from his Father, Sam decided to find spots in the organization for the slate of Local 210 Members who ran against him.

“I ‘also approved a few of my own (guys), but I didn’t care if they disliked me, if they brought value (to the Local) that was the main thing’ - ‘that was the only thing I cared about.’  ‘They knew I’d gotten a lot of support (from the Membership) because my intentions were honorable,’” he said.

Said Peter: “The vote was held from (8 a.m.) to midnight.  It was tied and there were only forty ballots left - ‘and every single one went to Sam.’  ‘I will never forget that night.’  I said, ‘Bro, you pulled this off.’  ‘I was so proud.’  For my Dad, ‘it was vindication and Sam won it fair and square.’”

The Capitano Brothers were prepared for the coming cries of so-called and unfair negative influence that lingered from the past after the results of the election were made public.

“I said, ‘here we go again,’ but Sam ‘decided to keep a couple of the guys from the old regime on the Executive Council and after a while, they understood the evolution.’  (Sam) ‘had a vision for Local 210.’  ‘He wanted to change the perspective.’  ‘He wanted more’ Minority Members, ‘which had not been the case in the past.’  ‘He showed a lot of respect to the Members and he would go out of his way to help them.’  ‘He would show up for our Members in grievance (hearings).’  ‘He would represent our Members like our father taught us.’  ‘No favoritism’ and he ‘wanted to get our Members involved’ (in their Union).  ‘They were getting paid a good dollar and they were benefitting from a good pension.’”

In 2018 he was approached by the International to become a Special International Rep for the Northeast Region, overseeing seven Laborers Locals in Buffalo, Niagara Falls, Olean, Rochester, Syracuse, Ithaca and New York State’s North Country, which totals a combined 4,500 Members.

“I ‘love it.’  ‘It’s an honor to serve.’  I was elected to represent a large (Laborers) population and I ‘not only represent them, I’m a participant’ - being a Member of Local 210 for (36) years,” Sam said.  “My home office is in Syracuse and I have also been President of Local 210 since September 2019, but because of the (Coronavirus Pandemic), ‘there’s a lot of remote’ (business conducted via computer).” 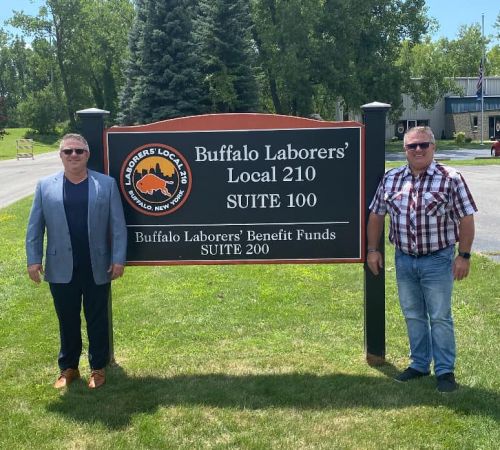 Sam’s appointment to the International is a “big thing,” said Peter, who worked out in the field for 25 years himself, which he said has provided him with “the knowledge to talk to contractors, by understanding what it means to be a Union Member.’”

“You ‘know what the Members need on the job.’  ‘To make sure they’re safe.’  ‘That they have enough water.’  ‘My Dad taught me safety.’  It started when I was a kid and would go hunting with him.  He was ‘always asking me’ if I (had my safety on my rifle).  On the job, ‘he would also make sure I had my hard-hat on.’  ‘And he taught me to never back down when you knew you were right.’  ‘To stand up for the little guy and not be concerned about yourself.’  ‘But he always wanted you to have fun too.’  ‘He was always joking around.’  ‘He enjoyed life,’” he said.

Peter became Business Manager in September 2019, when he began an elected three-year term.

Even though “it seemed the odds were stacked against them” because of the Local’s past, the Capitano Brothers always pressed on.

“We were ‘well-prepared and we always pressed on through the obstacles,’” Peter said.  “And I’m ‘glad’ my Dad ‘got to see my Brother move up to the International.’  ‘This was his way of life.’  He was a ‘Union Man - through and through.’  ‘He knew what was best for our Members and he stood behind them.’”