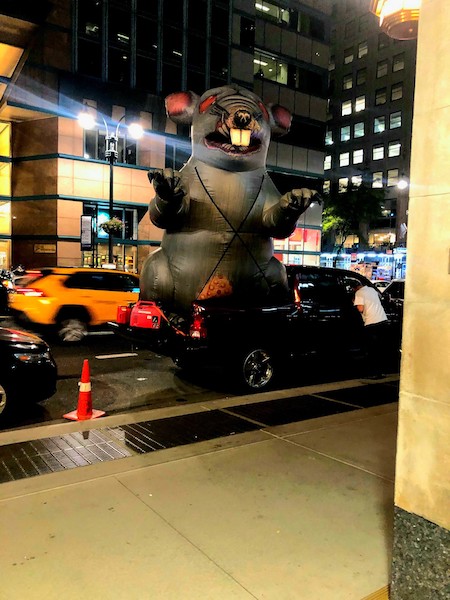 (NEW YORK CITY) - On Friday morning (September 18th), Employees of SL Green Realty Corporation arrived at corporate headquarters on Lexington Avenue to find a big rat outside the main entrance, just a few days after a ceremonial ribbon-cutting celebration for the opening of one of the city’s tallest commercial structures at One Vanderbilt.

There to greet them was Scabby the Rat - a symbol of protest, which was inflated by Laborers’ Union Local 79.

Union Officials said the protest was a result of SL Green’s choice to award the project at 15 Beekman Street to an unorganized contractor – citing: “Would you ‘not agree that a less-skilled construction workforce can lead to an unsafe’ workplace?”

Although the project at One Vanderbilt was built with Union Pride, SL Green chose to go in a different direction with their downtown project.

The concern now is the effect this has on Union Workers and how Big Business’s main interest is in securing and building profit.

Meanwhile, in their efforts to build a better infrastructure, the Unionized Laborers - who helped build the company’s historic site at One Vanderbilt is now forgotten.

One Local 79 Member explained the downtown address is less publicized and comes with less political attention.

“We are ‘deeply concerned’ about this project,” a Laborers spokesman said.  “As a ‘strong’ workforce, Local 79 ‘has vowed to practice inclusion and diversity with two-thirds of our Membership being People of Color and with over seventy-percent of all Members living in the five boroughs.’”

Alba is no stranger to lawsuits for not paying their Workers appropriately.

A lawsuit filed back in 2017 against Alba charged the company did not pay a Worker according to the overtime provisions of the Fair Labor Standards Act (FLSA) and charged the defendant treated all of its other Employees in the same manner.

Yet, somehow, it is the choice of SL Green to acquire the services of Alba to demolish and rebuild and then be leased by Pace University.

The building will have classrooms, and dorm facilities, as well as a library, a learning center and a dining facility.

To Read This Labor News Story In Its Entirety, Go To: http://laborpress.org/laborers-local-79-confront-worker-exploitation-at-beekman-st-construction-site/