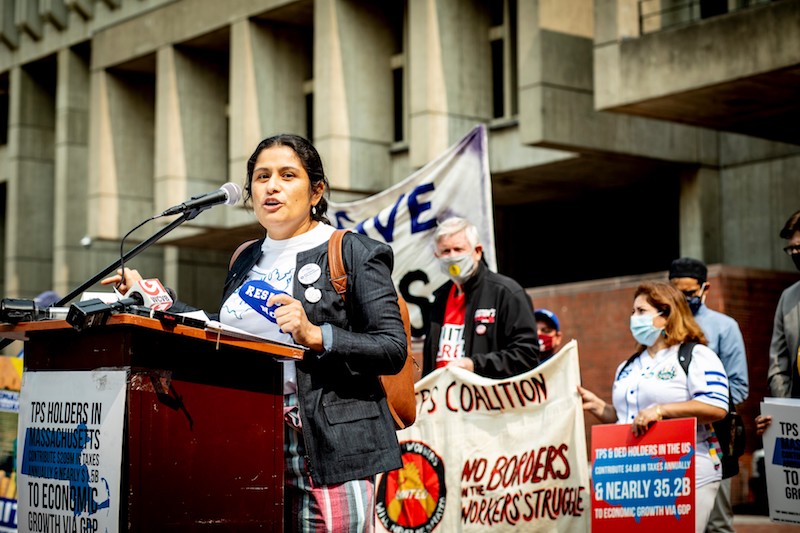 (PASADENA, CALIFORNIA) – A Federal Appeals Court has ruled the Trump Administration can end temporary protected status for Immigrants from El Salvador, Haiti, Nicaragua and the Sudan - possibly setting up more than 300,000 people to be deported beginning next year.

In a 2-1 decision, a three-judge panel of the Ninth Circuit Court of Appeals in California lifted a lower court’s injunction barring the Trump Administration from enforcing the end of the protected status, which is granted to Immigrants from countries where conditions like war, epidemics or natural disasters make it dangerous for them to return.

Called TPS, it allows them to live and work in the U.S. - legally.

She held that while the plaintiffs had shown that Republican President Donald Trump had demonstrated racial and national-origin animus against “Non-White and Non-European Immigrants,” and that the administration had pressured DHS to revoke the four countries’ protected status in January 2018, there was a “glaring lack of evidence” that racism was a direct reason for its decision.

Both organizers for the National TPS Alliance and a lawyer for the American Civil Liberties Union (ACLU) of Southern California told reporters they would ask to have the case reheard “en banc” by 11 Ninth Circuit Judges.

They have 45 days to request that, says Siomara Umana, a Lawyer with Make the Road New York.

If the Ninth Circuit refuses to rehear the case, however, the Federal Government could end TPS 120 days later.

It could then begin deporting Nicaraguans and Sudanese in March, and Salvadorans - a large majority of those affected - in November 2021.

Haitians are currently protected until a second case is decided, Umana says, but would be vulnerable if that court goes against them.

“This ‘is going to be devastating,’” says Salvadoran Immigrant Crisanto Andrade, speaking in Spanish through an interpreter.

He emigrated from the small city of San Vicente in the early 2000s, “looking for a better future,” and now works for the Nassau County (New York) Department of Parks.

Three of his five children are going to college in El Salvador, he explains, and the only way they can afford to go “is that I can support them from here.”

“This ‘is not just about’ TPS beneficiaries,” Umana said. “It’s ‘about their families.’”

The people affected have about 200,000 children who were born here and are thus U.S. citizens, she says.

Union Leaders were quick to condemn the ruling.

“President Trump’s decision to end TPS was cruel and wrong, and its harmful impact will be even greater amid this pandemic,” National AFL-CIO President Richard Trumka said in a statement. “Today’s court ruling further destabilizes our workforce and worsens already dangerous gaps in coverage for Immigrant Workers in our Nation’s COVID response.  Dismantling TPS is a direct attack on Union Members and Union Values.”

32BJ Service Employees International Union (SEIU) President Kyle Bragg said the ruling opened the prospect of deportation “for hundreds of thousands of people who have made the United States their legal home for decades.”

In the meantime, he added, it “redoubles our commitment to help remove this ‘blindly Anti-Immigrant and blatantly racist President from office.’”

32BJ does not keep immigration-status data on its Members, spokesperson Franklin Soults told LaborPress, but its Leaders estimate that more than 5,000 would be at risk of being deported.

The Union held a rally at Boston’s Government Center on September 15th to protest the decision.

To Continue Reading This Labor News Story, Go To: http://laborpress.org/afl-cio-32bj-rips-federal-court-decision-to-deport-essential-workers/