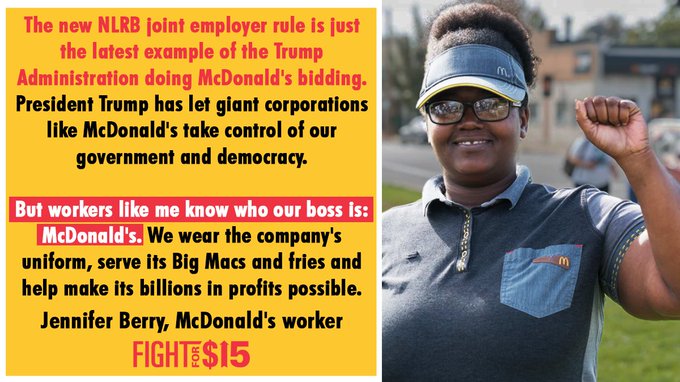 Indeed, the Trump scheme was so bad, said Judge Gregory Woods of the U.S. District Court for Southern New York, that “it conflicts with the FLSA (Fair Labor Standards Act) because it ignores the statute’s broad definitions” of which Workers the act covers.

“The department failed to adequately justify its departure from its prior interpretations and to account for some of the final rule’s important costs.  So the final rule is also arbitrary and capricious,” Woods added in his September 8th decision.

Though Trump’s Labor Department could contest Woods’ ruling in Higher Courts, it’s a victory for millions of Workers who suffer from rule by two employers, such as a corporate headquarters - think McDonald’s - and its local franchise-holder.

The 18 State Attorneys General who challenged it said Low-Income Workers, in particular, would win if Trump’s DOL lost.

Virtually all were rollbacks or cancellations of rules protecting Workers, consumers and the environment.

The groups’ record is 111 wins against Trump and 21 losses.

AGs from D.C., Minnesota, Maryland, Michigan, Oregon, Pennsylvania and Illinois were also among the challengers.

“This is an ‘important win’ for Workers,” said Heidi Shierholz, the Policy Director of the Economic Policy Institute (EPI) and DOL’s Chief Economist during the Democratic Obama Administration.

In a Friend-of-the-Court Brief, “EPI estimated the rule would cost Workers more than $1 billion annually by increasing wage theft and by incentivizing workplace fissuring.”

Trump’s Labor Department “dramatically ‘narrowed the set of circumstances where a firm can be found to be a joint employer under the FLSA,’” she explained.

That New Deal law “is our Nation’s fundamental Worker Protection Statute, Providing Wage and Hour Protections to the vast majority of U.S. Workers.”

“It was drafted broadly, creating employer coverage to ensure that companies that use staffing, temp, or subcontractors in their business operations are held accountable” for obeying its Minimum Wage and Overtime Pay Provisions, plus its ban on child labor.

“The Trump DOL’s rule ‘would have made it nearly impossible for many’ Workers ‘to enforce these rights and would have taken away the ability of Workers to recover unpaid wages from firms who use low-wage contractors in their work,’” she said.

To Continue Reading This Labor News Story, Go To: https://peoplesworld.org/article/workers-win-as-ny-federal-judge-tosses-trump-joint-employer-rule/