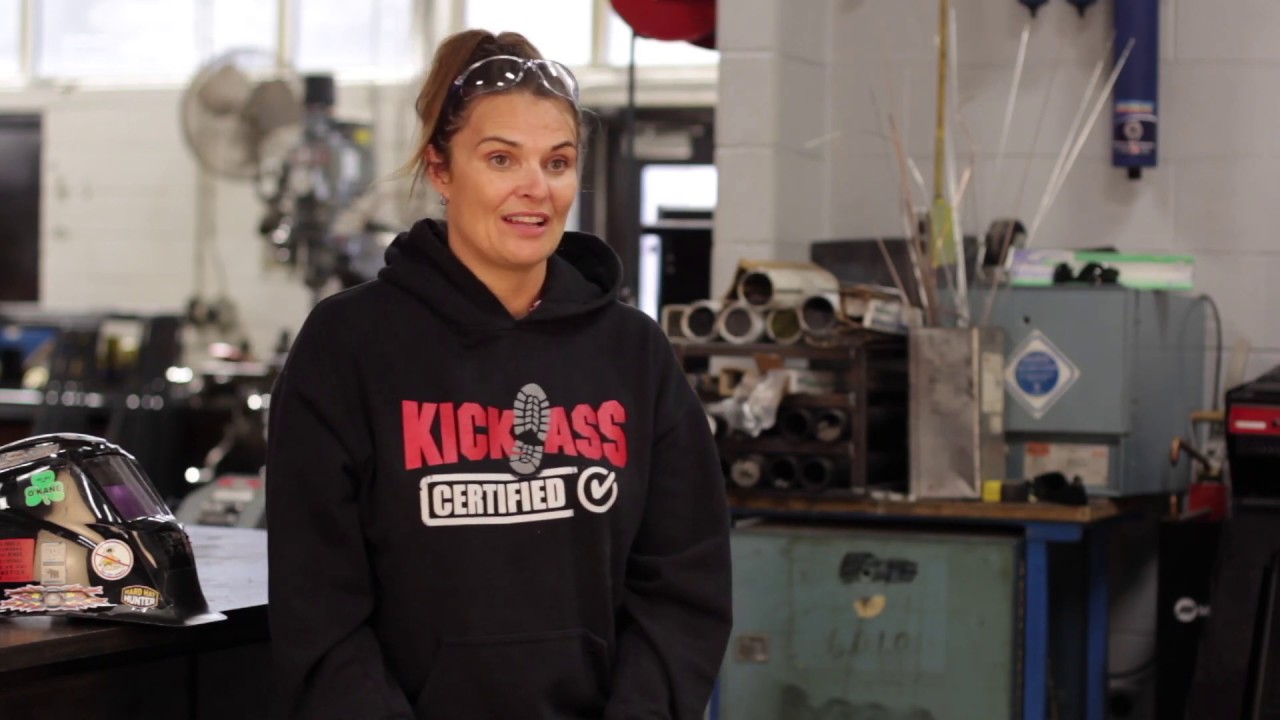 There were lots of false starts and disappointments before Jamie McMillan launched a career as an Ironworker.

However, once she got on the Skilled Trades track, the successful Ironworker, Boiler Maker and Entrepreneur Owner of KickAss Careers says she never looked back.

“I had several jobs serving, bartending, cleaning houses and working as a film extra occasionally, ‘but nothing satisfied me long-term,’” she said in an interview with the Ontario Construction News.

“I ‘got bored easily and jumped from job to job often.’  Filing taxes ‘was a nightmare,’” she added, with a laugh.

After dropping out of high school and hopscotching through a variety of odd jobs, she enrolled in a College Personal Support Worker Program as a mature student.

“I ‘was never an academic and found it difficult to focus and learn although I did excel in engaging, creative programs like drama, English media and shop classes,’” she remembers.

“I didn’t do well academically, but I excelled in the practical landing me a job upon graduation,” he said.

The career in health care came with a sense of accomplishment, but McMillan knew she wasn’t in the right place and, just like in the movies, it was a chance meeting with a former high school classmate that changed her path and pointed her toward the Skilled Trades.

Discovering an opportunity to earn a living while learning a Skilled Trade was a turning point in her life and McMillan was soon in an Ironworker Apprenticeship - and she was on her way to amazing opportunities and success.

She has worked across Canada as a Journeyman Ironworker in the construction industry since 2002.

Highlights of her career include working out west in the oil-sands for a few years.

“I ‘loved it so much that when things got slow with the Ironworkers a few years later I began a second Apprenticeship with the Boilermakers and was able to stay out west learning more about the gas and oil industry,’” she said.

In 2006, she began to volunteer as a mentor at networking events to encourage young women to consider careers in Skilled Trades through Skills Canada - Ontario.

Currently, McMillan continues to work on various construction sites across the country during the Summer and Winter months, but concentrates on school and community outreach during the Spring and Fall.

While it took years to find her dream career, McMillan says looking back at her childhood there were clues about where she would end up: “As a kid my parents bought and renovated houses and I was always the helper, ‘but I was never encouraged to consider the Trades as a viable career pathway.’  ‘Considering I was always handy and loved physically engaging work a career in construction was a natural fit.’”

Determined to be that encouraging voice for young women, McMillan co-founded KickAss Careers to teach skills are required in many professions especially mechanical, industrial and construction occupations.

Her secret to success?

“Find ‘what you love to do and then do it wholeheartedly,’” she said. “I ‘love the physical and mental challenge and the sense of accomplishment that follows when I am given a task, complete it and know that I did a fantastic job.’  There is nothing better than getting the ‘job well done from the boss from time to time.’”

Social Media has been a game-changer for women in the industry, providing opportunities to talk, meet and mentor each other.

Equality, diversity and inclusion began gaining momentum - and, in many cases, things began improving for everyone, not just the Tradeswomen, McMillan said, admitting there is still a long way to go.

Her advice for young women considering a Trade is simple: Do it!

To Continue Reading This Apprenticeship and Training Labor News Story, Go To: https://ontarioconstructionnews.com/ontarios-women-leaders-in-construction-jamie-mcmillan-shares-her-trades-career-success-and-inspiration-through-kickass-careers/