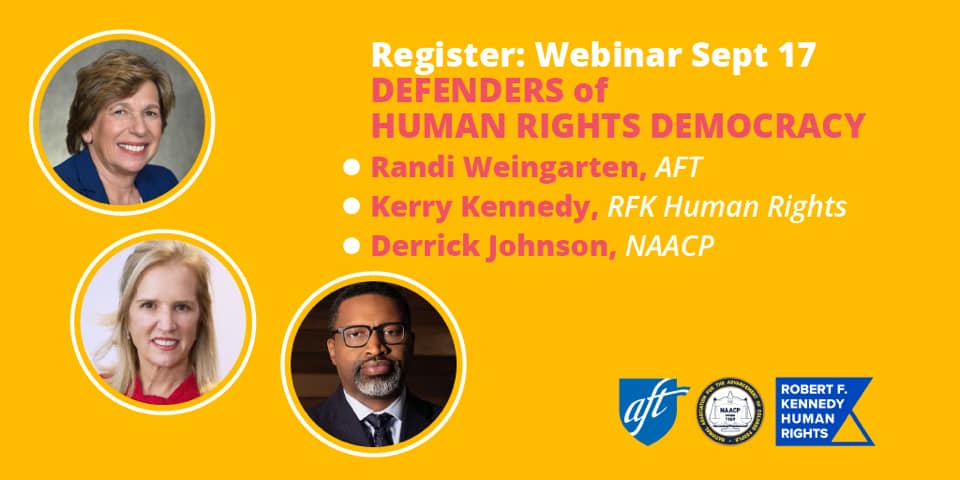 (WASHINGTON, D.C.) - Working with the RFK Human Rights organization, the American Federation of Teachers (AFT) will launch a program to share lesson plans on Human Rights and Democracy that has been developed by Classroom Teachers during a webinar that will be held today (Thursday, September 17th).

The webinar: Defenders of Human Rights and Democracy in Your Community, will feature: AFT President Randi Weingarten; RFK Human Rights President Kerry Kennedy; and Derrick Johnson, President of the National Association for the Advancement of Colored People (NAACP).

The invitation states: “Coming out of a turbulent Summer here in the U.S., when many people were inspired to lend their voices to the cause of fighting for Social and Racial Justice, the AFT and RFK Human Rights are launching a new set of classroom lessons focused on the cause of Racial Justice and defenders of Democracy.  These lessons were written by Teachers for Teachers.  They were designed to ‘meet the moment’ to help students learn from the Civil Rights struggles of the past and then become more engaged with community activism of today.”

The launch is the beginning of a project to bring Social Justice, Racial Equity and Democratic participation into the classroom.

Teachers developing the lessons will build them around Defenders of Democracy who have moved history, including legends from before the U.S. Civil War, as well as more recent and living leaders.

It has worked closely with the AFT for many years.

RFK Human Rights is named after Robert F. Kennedy, a U.S. Senator and brother of President Kennedy, who was assassinated while was running for President in 1968.

RFK Human Rights was established in that year.

The NAACP was founded in 1908 and is the largest and most widely recognized American Civil Rights organization.

EI General Secretary David Edwards, described this initiative as “an important project that will make a difference at a time when democracy is challenged, and racial strife and polarization are threatening our values and way of life.”

“The AFT, Classroom Teachers and their partners are providing hope for the future,” he continued.  “In the words of Martin Luther King, Jr.: ‘We shall overcome because the arc of the moral universe is long, but it bends toward justice.’”

To Directly Access This Labor News Story, Go To:  www.ei-ie.org/en/detail/16933/us-aft-and-rfk-human-rights-launch-human-rights-and-democracy-programme