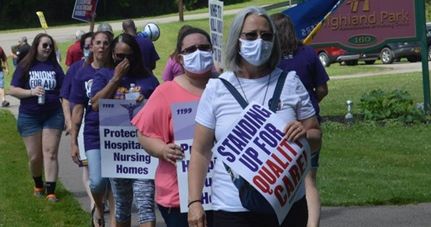 (WELLSVILLE, NEW YORK) – If a deal is not reached on a new contract, more than 55 Nursing Home Workers represented by 1199 Service Employees International Union (SEIU)/United Healthcare Workers East - who are employed at the Highland Park Nursing Home in Wellsville, will go out on Strike on Thursday (September 17th).

The Union-represented Workers will hit the street in protest over what 1199 SEIU says is management’s refusal to agree on a Collective Bargaining Agreement that includes basic Union protections, fair wages, affordable health insurance and training opportunities.

Both sides returned to the bargaining table on Tuesday (September 15th).

1199 SEIU released the following statement prior to the Strike:

Highland Park is owned by Excelsior Group LLC, a New York metropolitan for-profit corporation with no ties to the Wellsville community or the people that live here.

Both sides have submitted last and final offers through a Federal Mediator, but Workers will not settle for less than they deserve and voted to hold a two-day Strike!

Besides voting to hold a two-day Strike, Union Health Care Workers have also filed two Unfair Labor Practice charges in response to threats made by the Highland Park management to terminate Staff who participate in the Strike and unsubstantiated suspensions of Union supporters.

Please join us to support these Essential Health Care Workers on the Strike Line on September 17th - until September 19th.

“In 2018 we voted to join a Union ‘because we felt we were being mistreated and believed that if we could have a voice at work they wouldn’t be able to keep treating us like garbage,’” Maggie Phillips, a Certified Nursing Assistant (CNA) at Highland Park, said.

“But ‘after twenty-five months of bargaining, we are still dealing with daily threats, harassment, and our Co-Workers getting suspended,’” she continued.  ‘What we want is simple - more money to take care of our families and affordable health insurance so that we can take care of ourselves and our residents.’  ‘With all that is going on, refusing good health care to Nursing Workers is absolutely inhumane!’”

To Directly Access This Labor News Story In Its Entirety, Go To: www.wellsvilledaily.com/news/20200914/highland-park-nursing-home-workers-plan-strike-if-no-deal-is-reached

This facility is a joke. Those who decided not to join the Strike are the ones responsible for leaving somebody's loved ones laying in urine for two entire shifts. All these Workers that are Striking definitely deserve everything that they're trying to get as they are Front-Line Heroes and management is not willing to pay them, especially the administrator for threatening the Employees - which happens to be my family. We'll see what happens when the whole facility is lockdown in nobody's job is safe. And oh, by the way, somebody should question where all them COVID-19 funds went. They certainly didn't go to those that deserve them. And furthermore, management gave themselves hefty raises - but nobody else got them. Posted by Shaun on September 18, 2020 at 4:51 pm