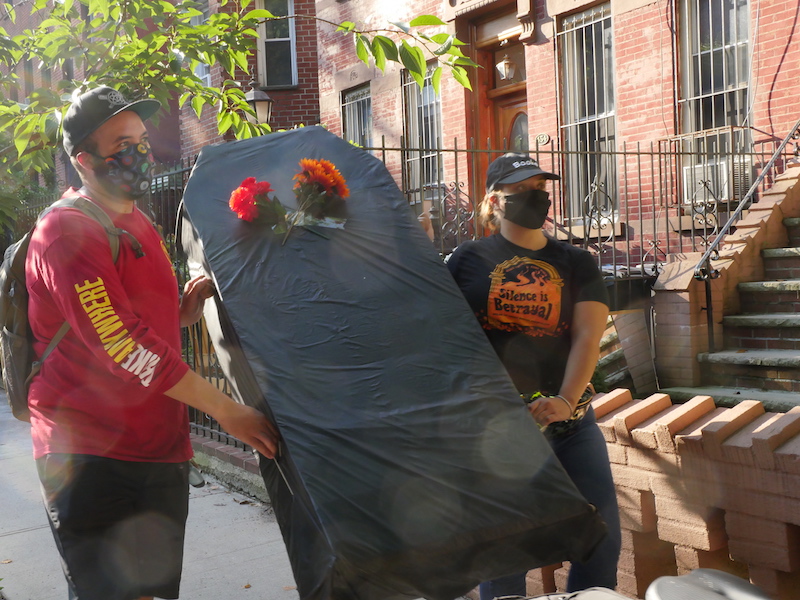 (BROOKLYN, NEW YORK) - Last week made it abundantly clear to an increasingly impotent New York City Mayor looking to axe 22,000 Municipal Employees from their jobs and force Public School Teachers back into poorly ventilated classrooms in the middle of a pandemic - that he could very well have a genuine Working Class rebellion erupt on his watch.

On Friday (September 4th), Public School Employees - “pissed off” with the deal the heads of the United Federation of Teachers (UFT) cut with the de Blasio Administration to push back in-classroom learning a measly two-weeks in the face of ongoing COVID-19 threats, delivered mock coffins to de Blasio’s very own doorstep in Park Slope.

The Working Class vitriol aimed the current Mayor further undercuts Conservative thinkers who want to try and paint the colloquially-named “Bill de Blah-Blah” as some kind of socialist hero.

“The negotiations that happened (between the de Blasio Administration and the UFT], ‘were a farce.’  ‘All it did was kick the can two weeks down the line.’  ‘We still don’t know what the state our buildings are - we never got the buildings inspection report.’  ‘We don’t know the status of ventilation.’  ‘It’s literally going to kill us - this administration is going to kill us,” Lee said.

Department of Education Employees who are against the negotiated September 21st return to class are adamant that schools should not, in fact, reopen until they are fully funded and the rest of the city records 14 days without a new case of COVID-19.

“This is a ‘matter of life and death,’” New York City School Workers Solidarity Campaign Organizer Flynn Murray said. “We’re ‘not talking about testing a few parents and a few teachers every month.’  We’re ‘not talking about let’s see how this goes.’  ‘This is people’s lives that we are gambling with’ - and this community, these parents, these Teachers, these Union Members, these Nurses - are saying no, we absolutely cannot take that risk.’”

The States of Florida, Texas and California may have surpassed New York as the epicenter of the Coronavirus outbreak in the U.S., but its 441,763 recorded cases remains staggering.

Some 32,673 people across New York State have succumbed to the virus so far this year, according to Reuters.

City University of New York (CUNY)-Professional Staff Congress (PSC) President Barbara Bowen called opposition to municipal workforce cuts a “racial justice issue.”   “We know that (22,000) cut ‘will be disproportionally People of Color who serve People of Color,’” she said. “Labor and the racial justice fight ‘must be together.’”

To Read This Labor News Report In Its Entirety, Go To: http://laborpress.org/nycs-working-class-gives-mayor-de-blasio-a-wake-up-call/