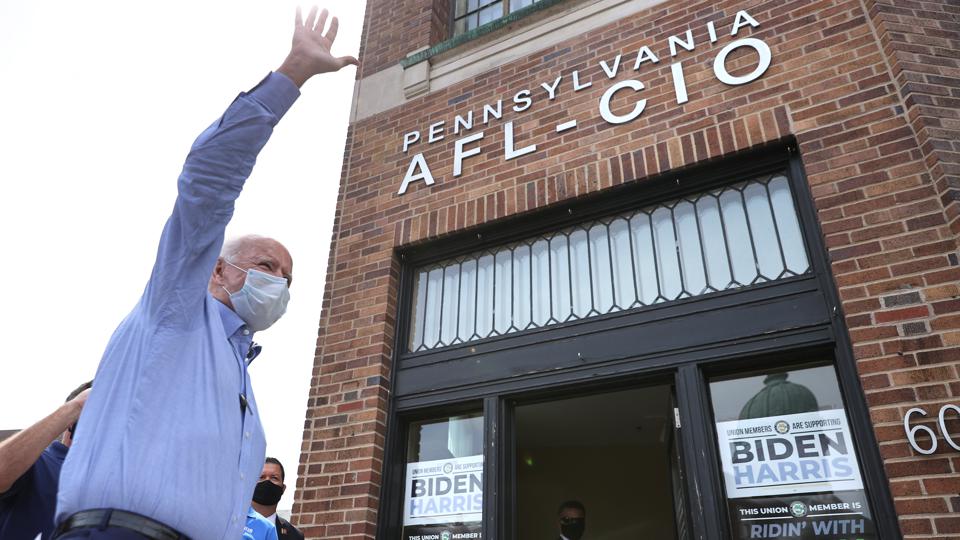 Unions have always been critical to Democratic electoral success.

A big reason Hillary Clinton lost in 2016 was that she bled even a few Members in states like Michigan, Wisconsin and Pennsylvania.

But now, Joe Biden feels strongly that he can win those voters back and the former Vice President is polling much better in these states.

Biden told viewers: “You can be sure you will be hearing that word ‘Union’ plenty of times if I’m in the White House.  If I have the honor of becoming your President, I’m going to be the strongest Labor President you have ever had.”

Biden also took to Twitter, writing: “Wall Street didn’t build this country - the Middle Class did. And Unions built the Middle Class.  Donald Trump doesn’t understand that.  We need a President who does.”

The Democratic nominee also pointed out how Trump’s COVID-19 response has hurt union Workers, telling Trumka: “He was worried if he started talking about saving peoples’ lives, the stock market might fall.  Well we know it’s been great for his rich friends, but it hasn’t been so great for the rest of us.  If I’m in the oval office, guess who’s gonna be there with me?  Unions, Labor… you.  There used to be a basic bargain in this country: Workers shared in the wealth their work helped create.”

To Directly Access This Labor News Story, Go To: www.politicususa.com/2020/09/07/the-strongest-labor-president-ever-biden-makes-his-pitch-to-unions.html?fbclid=IwAR1Hyo1L4aAKUslFkeVCB8LrVQQN8qheH3diOriiJJAUm1OiX4TexfsAC44

And For More, Read: Biden Vows To Be ‘Strongest Labor President You’ve Ever Had’ At Union Event At www.forbes.com/sites/andrewsolender/2020/09/07/biden-vows-to-be-strongest-labor-president-youve-ever-had-at-union-event/?utm_campaign=forbes&utm_source=facebook&utm_medium=social&utm_term=Gordie%2F&fbclid=IwAR3FcQWkA_3udpgDVv1kdqemkZrgZRWXlrzmfSU9QbV7XxgNH8jv4OeAiQU#33a2f60e5d5d