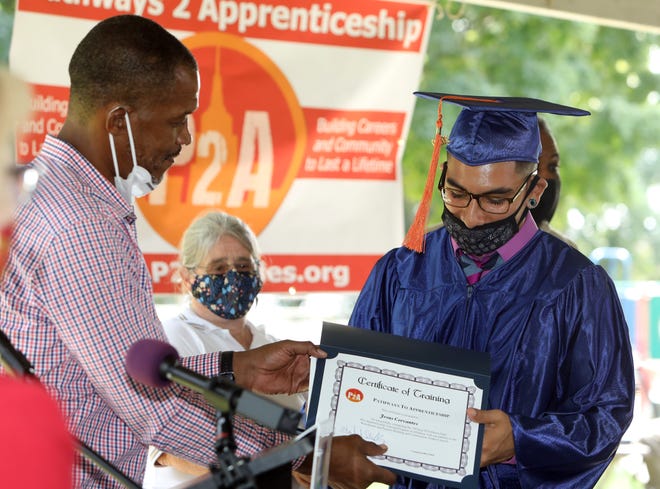 (NEW ROCHELLE, NEW YORK) - Over the last six weeks, Anthony Jackson learned a wide range of construction skills.  He was taught how to build scaffolds, cut metal and operate power jacks, but the 35-year-old stressed he obtained more than just construction expertise during a new Pre-Apprenticeship Program in New Rochelle.

"I ‘obtained knowledge that will help me become a better man than I am today,’" Jackson, who spent two years in federal prison, said during his graduation from the program. "But ‘it's up to me and whether or not I'll apply it.’"

Jackson, along with 11 others, hope the new program proves to be a game changer for them.

The dozen New Rochelle residents were celebrated at Five Islands Park during a small ceremony after they graduated from the Pre-Apprenticeship Pilot Program, which trains unemployed and underemployed city residents to move into Construction Union Apprenticeships and jobs.

The program was created out of a partnership between Pathways to Apprenticeship and Westhab with the New Rochelle Industrial Development Agency funding it.

Pathways to Apprenticeship recruits and trains people from low-income communities, including the formerly incarcerated and people on public assistance or public housing.

The program is "groundbreaking," said Eddie Doyle, the President of the Westchester and Putnam County Building and Construction Trades Council.  "Pre-Apprenticeship Programs like this are a model for Westchester County.  These programs bring Labor and community together to ensure that local residents access Union Apprenticeship Programs and gain life-long Middle Class careers."

As of July, 656 residents have gotten jobs through FSRC since 2017.

State Senate Majority Leader Andrea Stewart-Cousins told graduates she remembers when People of Color weren't always able to get jobs in the Building and Trades Industry.  She told them they’re setting an example for the next generation: "You ‘will be surprised at the doors that you will build and the doors that you will open.’"

Graduates are excited to see where their new skills take them.

James Laurent said his experience with the training program was a "real eye opener" as he pursues a Unionized Construction Career: "It ‘has taught me many life values and also instilled in me the proper skill sets to position me on the right path.’"

To Read This Apprenticeship and Training Labor News Story In Its Entirety, Go To: www.lohud.com/story/news/local/westchester/new-rochelle/2020/08/21/new-pre-apprenticeship-program-new-rochelle-celebrates-its-first-group-grads/3409708001/