As Americans, We Must Recognize The Difference Between Right And Wrong, And We Must Always Stand Up For What Is Right  The National AFL-CIO Reacts To The Fatal Police Shooting Of Jacob Blake 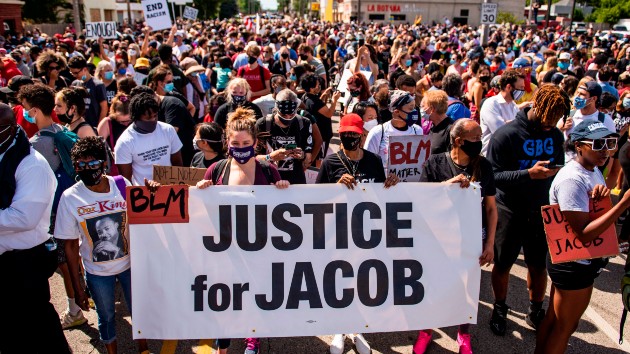 The Labor Movement joins with all those in Kenosha, Wisconsin, and across the country who are non-violently demanding an end to Systemic Racial Injustice after the shooting of Jacob Blake.

Despite months of protest and the outpouring of heartfelt demands for change, incidents like these remain all too common and they shock our collective conscience.

Actions that cheapen the lives of Black people and the service of good officers must be called out.

As Americans, we must recognize the difference between right and wrong, and we must always stand up for what is right.

We are outraged at the shooting of Jacob Blake by a Police Officer in Kenosha, Wisconsin.

We pray for his full recovery and for his loved ones.

As details continue to come in, we cannot escape the images of a Black man being shot in the back in front of his children.

What happened to Mr. Blake only strengthens our resolve to make sure Black Lives Matter in words and in deeds so we can heal our communities and our country.

This is precisely why the National AFL-CIO created the Task Force on Racial Justice and why we formed a sub-committee on policing.

A main objective of this critical work is to bring tangible reform to break down the systemic racism and inequality that have plagued our Nation for too long and use our position as both members of our communities and representatives of law enforcement to build a better tomorrow.

That’s how we can realize our goal of preventing future incidents like the one that unfolded in Kenosha.

Terry Melvin, President of the Coalition of Black Trade Unionists and Secretary-Treasurer of the New York State AFL-CIO, serves as the Task Force’s Executive Director.

To Directly Access This Labor News Report, Go To: https://aflcio.org/press/releases/afl-cio-reacts-police-shooting-jacob-blake