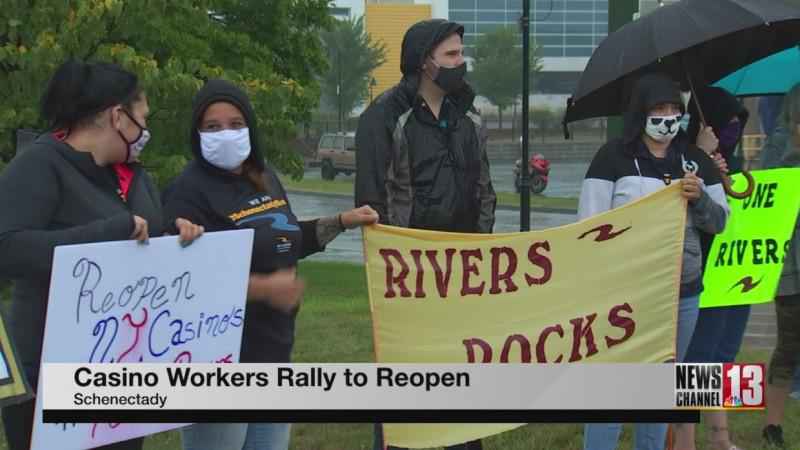 (SCHENECTADY, NEW YORK) – With their frustrations high and their bank accounts low, rallies were held across New York State late last week by Workers displaced by the closing of New York’s private casinos.

"I ‘do have reserves but, you know, it's getting to that time where we're ready to go back to work, and we need that steady income and that job security.’  ‘It's scary,’" said Noah Shechter, an employee at Rivers Casino in Schenectady told WNYLT-TV.

Shechter, who has worked at Rivers Casino for two years, was one of many Casino Employees to rally along Erie Boulevard Thursday (August 27th) afternoon.

"I ‘know that we have the ability to reopen and our management will put in place those procedures that we need to do and I believe that we can reopen safely,’" Shechter said.

LaChelle Rick, a Table Games Supervisor at Rivers, said she understood Governor Andrew Cuomo had to implement a shutdown, but never expected it would last this long.

NewsChannel 13 reached out to New York State Officials and Division of the Budget sent the following statement: "New York State has been following the data and latest science on the virus to re-open the economy safely and we are doing the same when it comes to casinos.  Casinos remain closed along with similar activities across the state as they invite congregation among customers in proximity to each other while eating and drinking, activities that don't allow for consistent mask-wearing.  Nationwide, states are delaying re-opening plans and rolling them back as COVID cases spike.  We've already seen casinos in California, Arizona and Miami re-open and then close due to COVID.  In New York, we will continue to track the data, the science and activity at casinos around the country and will make a decision on re-opening them here when health experts determine it is safe to do so."

For Shechter and Rick, that response is no longer acceptable.

"Unemployment ‘is gone.’  ‘It really is.’  ‘I mean we're really struggling,’" Rick said. "We're ‘ready to work and if we don't get the subsidy or get everything brought back we're going to really be hurting.’"

To Directly Access This Labor News Story, Go To: https://wnyt.com/capital-region-comeback/casino-workers-rally-rivers-casino-schenectady/5841992/