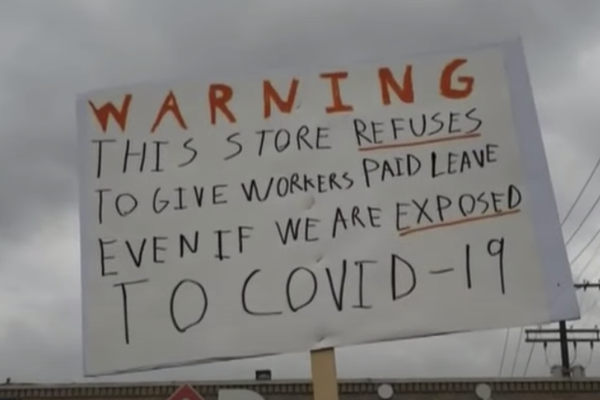 Although Donald Trump has repeatedly claimed that American Workers are “thriving” during his Presidency, this contention rings hollow.

The mishandled Coronavirus Pandemic, of course, has created levels of unemployment, hunger, and misery in the United States not seen since the Great Depression.

But even in the years before the pandemic, when Trump claimed he had created “the greatest economy in history,” American Workers were left far behind.

During pre-pandemic years, the Labor Market was shifting, producing a rising percentage of Workers concentrated in low-paying jobs.

A study released by the Brookings Institution in late 2019 reported that 44% of American Workers (53 million people) earned low wages, with Median Annual Pay of $17,950 per year.

Low-wage Workers usually remained stuck in these jobs and even Workers in the Middle Class were “more likely to move down the occupation ladder than up.”

Unable to cover their living costs, substantial numbers of Americans worked at two or more jobs.

Overall, wages remained stagnant during the Trump Era, with gains in take-home pay eaten up by inflation, leaving “real wages” for Workers the same as 40 years before.

By contrast, the compensation received by their bosses rose dramatically, leading to an Executive-to-Worker Pay Ratio of 339 to 1.

Millions of American Workers also suffered injury - and even death on the job.

According to the U.S. Labor Department, in 2017 there were 2.5 million Child Workers in the United States.

Child labor was particularly common in agriculture, where it was perfectly legal for a 12-year old to work 50 to 60 hours a week in the fields, exposed to toxic pesticides and extreme heat.

American Workers faced other kinds of mistreatment, as well.

In late 2017, a Pew Research Poll of U.S. Working Women found 42% said they faced gender discrimination on the job.

McDonald’s, one of the largest employers in the United States (with more than 800,000 Employees), became notorious for the sexual harassment experienced by its Workers, who even staged a nationwide Strike over the issue.

Perhaps most significant, American Workers were largely stripped of a key protection against exploitation: Labor Unions.

To Continue Reading This Labor Perspective, Go To: https://historynewsnetwork.org/article/177127