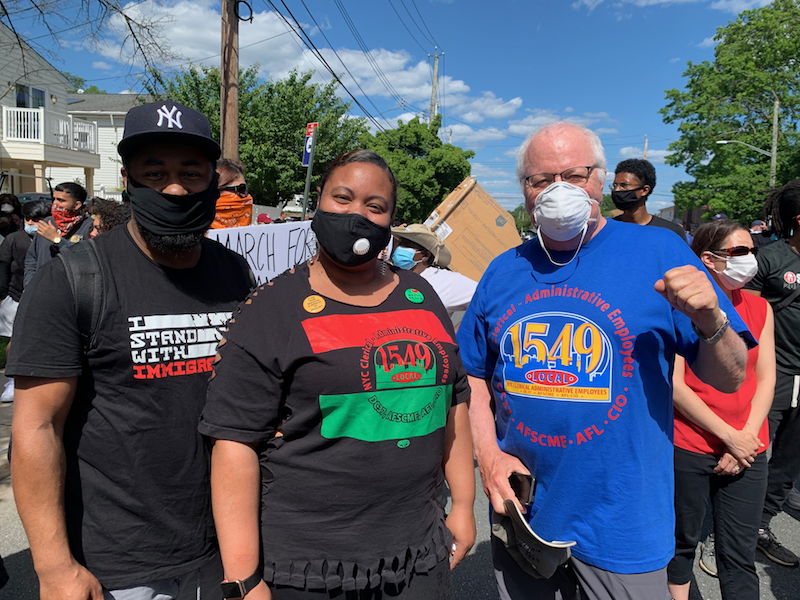 (WASHINGTON, D.C.) - On Friday (August 28th), a powerful coalition of Labor Unions joined forces to help co-sponsor the 57th anniversary celebration of 1963’s March on Washington for Jobs and Freedom - an event packed with extraordinary urgency and profundity in an era of on-going police brutality and calls to defund the police.

This year’s anniversary march against systemic racism and economic exploitation - as well as dismantling racist corporate and government policies, came on the heels of the police shooting of Jacob Blake - an unarmed Black man who was shot seven times in the back by police officers in Wisconsin as his three sons watched.

“We ‘need’ action,” said Marcus King, the President of Teamsters Local 331 and Director of the Teamsters Human Rights and Diversity Commission.

“The Teamsters ‘demand that those in power listen to their constituents and the thousands of people gathered here today who are tired of unnecessary bloodshed in our streets, who are tired of the disenfranchisement of people of color at the ballot box,” King said.

Trade Unionists marched on D.C. last week, to advocate for both the George Floyd Justice in Policing Act of 2020 and the John R. Lewis Voting Rights Act.

Other Union Members who did not attend Friday’s march due to the ongoing risks of COVID-19, expressed solidarity with their Brothers and Sisters who did march.

“If won, these victories ‘will build upon those won during the Civil Rights Movement and the historic 1963 March on Washington. The Civil Rights, Voting Rights and Housing Rights Acts along with Medicare and Medicaid were democratic wins for all Americans passed by congress in the years immediately following that march,’” said President Eddie Rodriguez of American Federation of State, County & Municipal Employees (AFSCME) Local 1549. “We ‘pledge to continue this fight until the demands of this march and the movement are met.’  In the words of the late Civil Rights leader John Lewis, ‘we will make good trouble’ until they are.”

“We ‘also have to value our own lives and stop killing each other and pulling each down.’  Criminal justice reform ‘does not start at the courthouse, the correctional facilities or probation or parole offices,’” UPOA President Dalvanie Powell said.

“It ‘starts when a child is conceived.’  ‘We all deserve equal opportunity in terms of education, employment, health care and housing.’  ‘We must be united, not divided, and keep the movement going.’  This Fall, ‘we have to get out and vote because all our lives depend on it,’” he said.

President Shaun D. Francois I of AFSCME Local 372 and DC37 backed the symbolic march too.

“The Union ‘has not attended the march physically, but we stand in full solidarity with the peaceful movement.’  ‘We believe all lives matter, it just seems some lives are always targeted by the police in an unjust manner and needs to be addressed,’” Francois said.

“There ‘should be one equal Justice System for all,” Francois added.

To Directly Access This Labor News Report, Go To: http://laborpress.org/labor-marches-for-nationwide-policing-reforms-and-stronger-voting-rights/