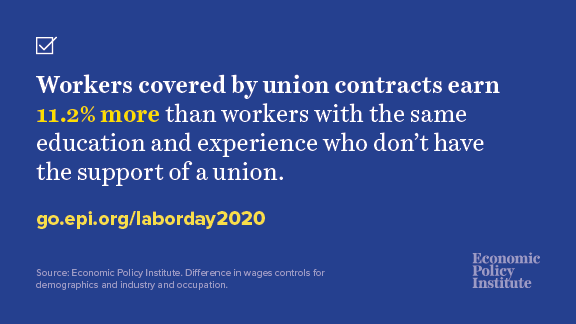 (WASHINGTON, D.C.) - A new report by the Economic Policy Institute (EPI) discusses the importance of Unions and Workers’ collective action in establishing an equitable economy, particularly during the Coronavirus Pandemic.

The authors find that Unionized Workers earn on average 11.2% more in wages than their Non-Unionized peers (Workers in the same industry and occupation with similar education and experience).

White Workers represented by a Union are paid 8.7% more than their Non-Unionized peers.

However, in 2019, only one in 9 U.S. Workers were covered by a Union Contract, while 48% of all Non-Union Workers say they would vote for a Union if given the opportunity

“The ‘right to a Union is a racial justice issue, as well as an economic justice issue,’” said Celine McNicholas, the EPI’s Director of Government Affairs and one of the report’s authors.

“Unions ‘help shrink’ the Black-White wage gap, ‘due to the dual facts’ that Black Workers are ‘more likely than’ White Workers to be represented by a Union, and Black Workers who are in Unions ‘get a larger boost to wages from being in a Union than White Workers do.’  Unions ‘also provide a crucial voice’ to Workers ‘in which they can address issues of discrimination and inequities at their workplace,’” McNicholas said.

The report’s authors explain that a badly broken system governing Collective Bargaining has eroded Unions and Worker Power more broadly, contributing to both the suffering during the pandemic and the extreme economic inequality exacerbated by the pandemic.

Despite efforts to push policy reforms, the U.S. entered the COVID-19 Pandemic with a weak system of Labor protections.

As a result, Working People - particularly low-wage Workers, who are disproportionately Women and Workers of Color - have largely borne the costs of the pandemic.

While providing the “essential” services our economy relies on, many of these Workers have been forced to work without Personal Protective Gear (PPE), have no access to Paid Sick Leave, and when Workers have spoken up about health and safety concerns they have been fired.

“Now, ‘more than ever, we need strong’ Labor Laws ‘to protect’ Working People ‘from the health and economic impacts of the Coronavirus Pandemic,’” said Lynn Rhinehart, EPI Senior Fellow and one of the report’s authors.

“We ‘need’ policymakers ‘to use their power to halt and reverse the four-decades-old trend of rising inequality, while also creating meaningful reforms that help’ Workers ‘organize’ Unions,” Rhinehart said.

To Continue Reading This Labor News Story, Go To: http://iowalabornews.com/?p=27844