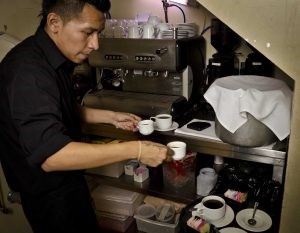 (NEW YORK CITY) - Three weeks into Phase 4 of New York City’s reopening plan and more Workers are making their way back to the job.

While many have welcomed the opportunity to return after months of COVID-19 quarantine, they still have questions about the safety guidelines and protocols that their employers should be implementing to maintain workplace safety.

Some of those Workers took the opportunity to provide an update about their recent experiences during a joint panel discussion and press event hosted by Cornell University’s Worker Institute and the Restaurant Opportunities Center (ROC).

In March, ROC-New York established a Pandemic Relief Fund, which acted as a lifeline for 6,000 Food Service Workers across New York State and other parts of the country, according to Prabhu Sigamani, the Director of ROC-New York.

“In the first two weeks that we set up the Pandemic Relief Fund, ‘we received more than (10,000) applications, the demand for the relief fund is still high as the Workers are facing challenges to get employment - and we thank the generous donors who have contributed towards the well-being of the Restaurant Workers,’” Sigamani said.

In addition to the relief fund, ROC has been mobilizing its Members to put pressure on major corporation-owned restaurants such as Olive Garden, Applebee’s and Chilis to provide critical Job Protection Benefits to Workers during the public health crisis.

“And, Restaurant Workers ‘must be given paid sick days and paid medical leave so that they have the medical attention and protection they need during this pandemic,’” Sigamani said.

Yesenia Mata, Executive Director of La Colmena, an Immigrant and Day Labor Rights Organization in Staten Island, said that when the city announced back in March that there was going to be a shutdown, the Worker Center had to make a heavy decision about whether to keep its doors open or shut.

It ultimately remained open because she and her Staff knew the Immigrant Community would be desperate without its services.

The center shifted into emergency mode and began to assume new roles it hadn’t fulfilled before, such as food distribution.

“At first, ‘we had just enough food for forty people.’  ‘But then one day, we had (200 to 300) people on line outside and they were saying that they needed help, not only that they needed food, but they needed economic support,’” Mata said.

There needs to be a robust policy solution by elected leaders, she said, to provide much-deserved economic relief to New Yorkers, particularly Undocumented Workers who do not receive Federal relief.

Currently, State Senator Jessica Ramos has sponsored a Bill that would tax the unrealized capital gains of the state’s 119 billionaires and directs the revenue from the tax into a Worker Bailout Fund.

To Continue Reading This Labor News Report, Go To: http://laborpress.org/returning-workers-still-question-workplace-safety-as-pandemic-continues/