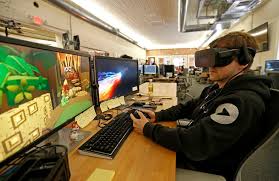 With people cooped up at home, video game sales have spiked up almost 20% over a year ago - but against the backdrop of growing earnings, the industry is facing a reckoning over how it treats Workers.

The business of making video games is often a passion project, said Dmitri Williams, an Associate Professor of Communication at the University of Southern California.

“Of course ‘it’s our baby, and we’re willing to put in the extra hours to do it,’” he said of game developers. “But ‘when you’re essentially in service to the man, it’s less exciting to be working on something at (2 a.m.)’”

As scrappy startups have become multibillion-dollar enterprises, the norms of sometimes 100-hour work-weeks with no extra pay have started rubbing Workers the wrong way.

This week, Bloomberg News reported that Employees at Blizzard Entertainment, which makes World of Warcraft, have been circulating a spreadsheet to anonymously share salaries and hold the company accountable for pay disparities.

Renee Gittins, who heads the International Game Developers Association, said a recent survey found about a third of developers make less than $50,000 a year.

“Considering that most game development studios and teams ‘are in high-cost-of-living areas, that can be quite a low salary,’” she said.

The survey also showed People of Color and women remain underrepresented in gaming, with less than a quarter of developers identifying as female.

“The industry ‘has had problems when it comes to treating people equally and providing safe spaces for interactions,’” she said.

In recent months, dozens of women in gaming have made public charges of discrimination and harassment on Social Media.

Last December, Riot Games, the maker of League of Legends, agreed to settle a gender Discrimination Lawsuit for $10 million.

“That is ‘not an encouraging sign if there’s Labor unrest,’” said Dieter Waizenegger, the Executive Director of CtW Investment Group, which promotes responsible investment and manages $250 billion in Union-sponsored pension investments.

He’s called on the companies to address pay disparities and other workplace issues that can harm Worker morale and, ultimately, cut into bottom lines.

To Directly Access This Labor News Story, Go To: www.marketplace.org/2020/08/04/video-game-workers-speak-out-about-treatment-amid-industrys-record-sales/