Hearst Magazines Staff Of 500, Who Are Employed At 28 Different Magazines, Vote Overwhelmingly To Unionize With Writers Guild Of America East 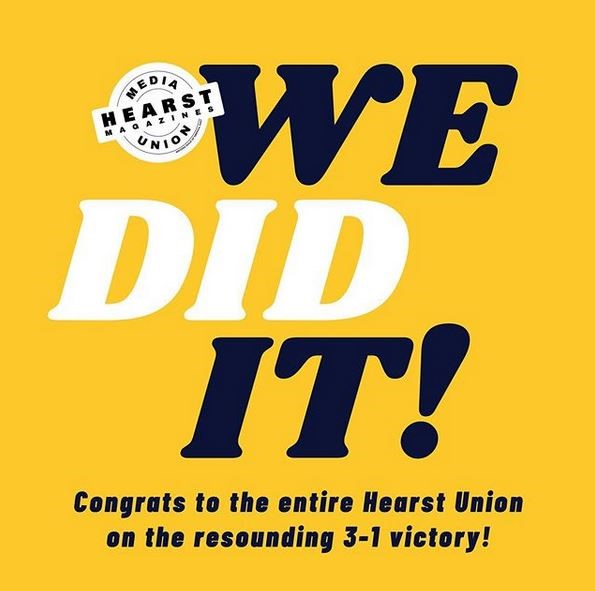 (NEW YORK CITY) - Hearst Magazines’ Digital and Print Staff has voted overwhelmingly - 241-to-83 - to Unionize with the Writers Guild of America (WGA) East in an election administered by the National Labor Relations Board (NLRB).

The Staffers announced their intention to join the Guild last November, but management refused to recognize the Union voluntarily and waged a protracted legal battle at the NLRB in an attempt to delay the election and divide the Bargaining Unit into six separate groups.

In June, the NLRB dismissed all of Hearst management’s arguments and directed an election for a single Bargaining Unit across all 28 magazines.

“Hearst ‘is not just about a storied brand; it’s about the hard work of the people who are involved with writing, editing, and producing the stories that educate and inspire and delight readers and viewers,’” WGA East Executive Director Lowell Peterson said.

“These Employees have voted overwhelmingly to join with the WGA East to bargain collectively over the terms and conditions of their employment ‘and to make their voices heard’ in the workplace ‘to ensure that their needs and interests and priorities are addressed.’  ‘We welcome them to our community of creative professionals and we look forward to working together to demonstrate, again, that collective bargaining works,’” Peterson said.

The Hearst Magazines Organizing Committee tweeted: “We’re thrilled to see so many months of hard work pay off and are eager to start bargaining our first Union Contract.  Hundreds of us across 28 brands and several states voted for a fairer and more transparent workplace and we can’t wait to bring this energy to the negotiating table.  We are grateful for the support of our Union Siblings in the WGA East.  We will join them to raise standards for all with solidarity across the industry.”

The Guild now represents nearly 7,000 Writers in film, television, and news - both broadcast and digital.