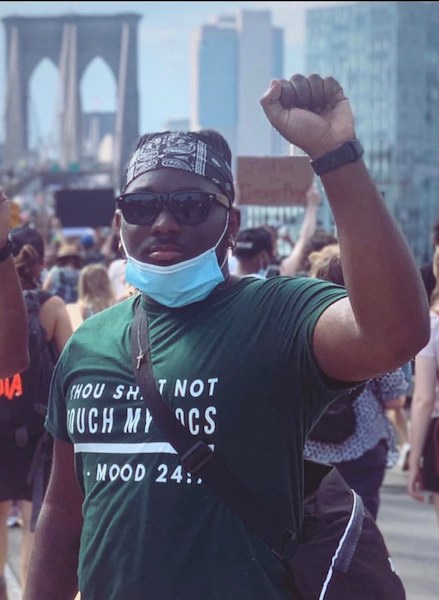 (QUEENS, NEW YORK) – St. John’s University Journalism Major Giovahn Dejoie, 19, had high hopes when he moved to Queens and started working at Eulen American in the Fall of 2019, but less than four months into his job as a JFK Airport Baggage Handler, Dejoie started to see red flags: “One of the ‘first things was pushing two wheelchairs at a time.’  ‘A lot of times they were understaffed and I just knew there was something wrong about that.’”

To Dejoie (Pictured Above), suddenly leaving his job as a Baggage Handler to work as a Wheelchair Attendant - and attempting to simultaneously juggle two clients at once, didn’t seem all that safe.

Eulen America, an Airline Contractor that provides Baggage Handlers, Wheelchair Agents, Cabin Cleaners and Customer Service Representatives for airlines including America Airlines, trains its Workers for multiple functions - but no one trained the young Dejoie to responsibly manage multiple patrons at the same time.

“A ‘lot of time there would be missing hours’ in people’s paychecks, the management ‘in general belittled everyone and it was demeaning,’” Dejoie adds. “It ‘felt like free labor instead of an actual job.’  There was ‘favoritism for different Employees and they were very manipulative as well.’”

Months after New York State Governor Andrew Cuomo signed the CROWN Act into law, Dejoie says he was openly disparaged for getting new dreadlocks: “One of the managers said I ‘can’t clock in because my hair looked like I just woke up.”

Instead of having the issue resolved by Human Resources, Eulen America exacerbated the situation, according to Dejoie: “When you have an HR Department, ‘you think they are there to help you and that they are an unbiased place.’ ‘A lot of time, it felt like it was’ HR management ‘against’ the Employees.  ‘The policies that we were facing were not practiced all around.’”

Dejoie says it often felt like the management team was treated better then overworked Employees: “A lot of times when my manager ‘asked me to push two’ wheelchairs, ‘I had the right to say no.’  Then she would be like, ‘You have the right to say no, but if there is retaliation you can’t get mad at me for that.’  ‘It felt like you were obligated to do so.’  ‘They didn’t out right threaten you - it was more like if you don’t do this, there might be cuts.’”

The only time management was ever nice, according to Dejoie, was when he returned from vacation and learned about the strong anti-union stance the company had taken against Co-Workers attempting to Unionize with 32BJ SEIU (Service Employees International Union).

“I ‘came back from a vacation I was forced to take early,’” Dejoie says. “Later on in my shift, (my manager) ‘asked me if I was signing any Union Cards.’  ‘But I pretended I wasn’t, and that I didn’t know what she was talking about.’  Then she said ‘don’t sign it’ because ‘it’s not going to do anything for you.'”

Dejoie believes the company was Anti-Union because they knew their habit of “losing” Employees overtime pay and wages, allegedly due to a Work App - was wrong.

“They had this Kronos App ‘that they said was malfunctioning,’” Dejoie says. “Employees ‘lost one day of wages as though nobody had come to work that day.’”

Once, after his paycheck was shorted - Dejoie had to forego getting a Mother’s Day gift.

“I ‘had over ($100) missing from my check,’” he says. “I’m at ‘another job now and I don’t mind overtime because I’m in an environment where I feel comfortable and I enjoy working with the people that I work with.’”

To Continue Reading This Labor News Report, Go To: http://laborpress.org/working-in-power-former-airport-employee-rises-above-anti-union-bosses/