If Not Done Correctly, (It) Will Result In The Loss Of Lives And Permanent Physical Harm - The Buffalo Teachers Federation Calls For A Delay In The Buffalo Public School Districts Reopening Plans

Union Also Calls For The Removal Of District Administrators Who Are In Charge Of The Reopening Committee, As Well As The Ending Of Secrecy, A Real Involvement Of Stakeholders & A NYS Investigation Into The Districts Procedures 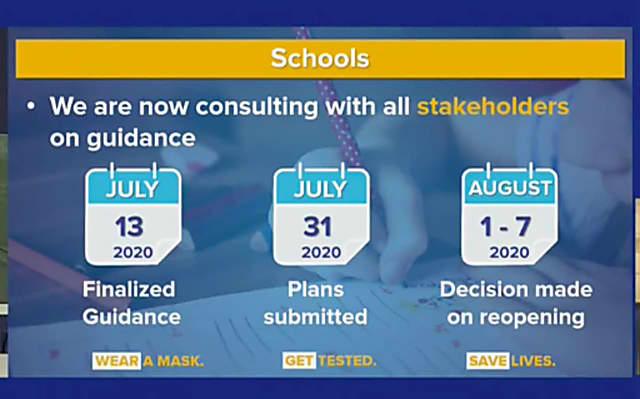 (BUFFALO, NEW YORK) – The Buffalo Teachers Federation (BTF) is calling for school districts to have more time in which to submit reopening plans by applying for an extension for submission.  In addition, the BTF is also calling for the ‘removal’ of District Administrators who are in charge the reopening committee, as well as the ‘ending’ of secrecy, ‘a real involvement’ of stakeholders and a New York State investigation of Buffalo School District’s procedures.

“We are considering educational issues and plans that, ‘if not done correctly, will result in the loss of lives and permanent physical harm to students, parents, school staff and the community, as well as the deadly spread of the COVID-19 virus,’” BTF President Phil Rumore said.

The BTF called for specifics of the plan be made public, including: How and how often are schools going to be sanitized and made safe, and not just cleaned.  For example: In classrooms where food is eaten; In student bathrooms, most of which have no warm water; What action will be taken should a student and/or adult sneeze or cough; and How many classrooms have windows that do not open; What are the exact schedules for instruction; How will students and Staff be assured that each student’s temperature is taken each day; What will be done if a student purposely takes off their mask; How will students who need to use the bathroom be assisted/monitored; What are the procedures when a student/adult contracts the virus; Will there be a Nurse in all buildings at all times and what if one is not; How will the plans be monitored and adjusted; How will art, music and physical education classes be conducted?  Teachers cannot be going from room to room, exposing themselves and others to possible infections, the BTF said; How is safety ensured when students take their masks off to eat; The curriculum for all grades/subjects must be revised for distance learning; Teaching all students in a classroom is not the same as distance learning; and That the District must also be prepared for the unfortunate need for a complete pause in any in-school learning.

The BTF also called for the ability of parents and Staff to choose virtual learning to ensure their children’s or their safety, and that New York State and other involved agencies consider the zip codes of students/adults in making reopening decisions, as it is known some communities are unfairly impacted more than others.

The BTF also took issue with several of the School District’s reopening actions, including the fact that the Reopening Committees had only met a total six times - for about an hour or hour and a half and that those meetings entailed being told in general on what others were working on.

“As I’ve said previously, ‘if you make a decision that results in the death or serious physical harm to someone, you should have to explain that decision to that person’s family,” Rumore said.  “You ‘can make up for lost’ education - ‘however, you can’t bring someone back to life.’”

On the other matter, the BTF called for the ‘removal’ of District Administrators who are in charge the reopening committee, as well as the ‘ending’ of secrecy, ‘a real involvement’ of stakeholders and a state investigation of Buffalo School District’s procedures.

Unlike school districts across Erie County that have made reopening plans available to their stakeholders and community, held virtual community meetings and worked with all stakeholders to develop a reopening plan for their schools, the Buffalo Public School District shrouded its plans in secrecy by first labeling them confidential - and then two days before they were to be submitted to Governor Andrew Cuomo, refused to allow the District Reopening Committee, Stakeholders and public to see them, the BTF charged.

This District’s secrecy, lack of involvement of stakeholders and lack of time devoted to develop a safe reopening plan for Buffalo’s Public Schools that will, if done incorrectly, result in the loss of lives or severe physical injury, as well as undermining the education of our students, is a betrayal of trust and its responsibilities to our community, the BTF said.

The BTF therefore calls for the removal of District Administrator(s) in charge of the District’s Reopening Committee, the ending of secrecy, the real involvement of stakeholders and a State investigation of District’s procedures, BTF President Rumore, said.