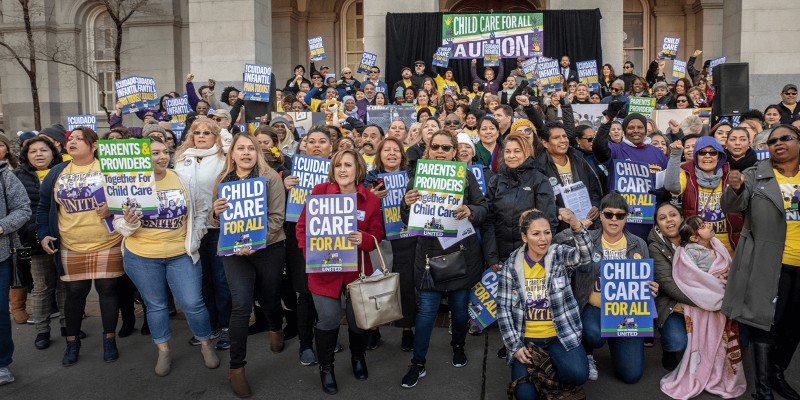 This result, which comes after Care Providers succeeded in their 17-year battle to win authorizing legislation from the state, gives them the ability to bargain together for higher pay, better training, and the kind of improvements that mean their families will no longer have to struggle just to pay for necessities.

With an overwhelming vote for CCPU, the 45,000 Family Child Care Providers will gain official recognition and bargaining rights with the state of California.

“After ‘so many years of struggle, I am happy we have finally certified our Union.’  ‘After so many Bills vetoed, trips to Sacramento and Providers who have come and gone, we are finally ready to begin negotiating for a better early care system for providers, our communities, and the children in our care,’” said Zoila Carolina Toma of Signal Hill.

The 97% CCPU yes vote also comes as Child Care Providers are increasingly recognized for their essential role in California’s recovery from the COVID-19 Pandemic and its widespread economic fallout.

“COVID-19 ‘showed the world just how essential child care is,’” said Shuante Brown, a Provider in San Diego. “It ‘forced many providers to put their own health at risk to ensure that Front Line Workers could do their jobs so that our economy kept moving.’”

Child Care Providers, many over the age of 55, have continued to work daily, providing essential early learning for the children of Grocery Store Clerks, Nurses and other Front Line Workers.

Providers said winning this Union Election means they will have a strong platform from which to work with the state to keep their home-based child care businesses open to parents who are counting on them now more than ever.

The pandemic has also revealed the need for Providers to have a voice to bargain for the kind of training and protective equipment needed to keep their families and those they care for safe.

For a workforce that is mostly women and 74% People of Color, succeeding in winning Union Representation is also a significant step forward in their fight for racial justice for their own families and the young people they educate.

The vote culminated the Providers’ decades-long fight for Union Rights.

Last Fall, after many years of being denied the rights that other Workers have - the right to form a Union and bargain for higher pay, family-sustaining benefits, and other improvements - the State Legislature passed and the Governor signed into law AB 378 (Limón) which enables Child Care Providers to bargain for important, lasting improvements to the Child Care System.

The vote was a mail-in Secret Ballot Election conducted by the American Arbitration Association under the direction of the California Public Employment Board.

Family Child Care Providers had been working to win their rights since 2003 by organizing in their communities, forming their Union, and working with elected officials.

To Read This Labor News Story In Its Entirety, Go To: www.afscme.org/press/releases/2020/california-family-child-care-providers-win-union-election-in-landslide-victory