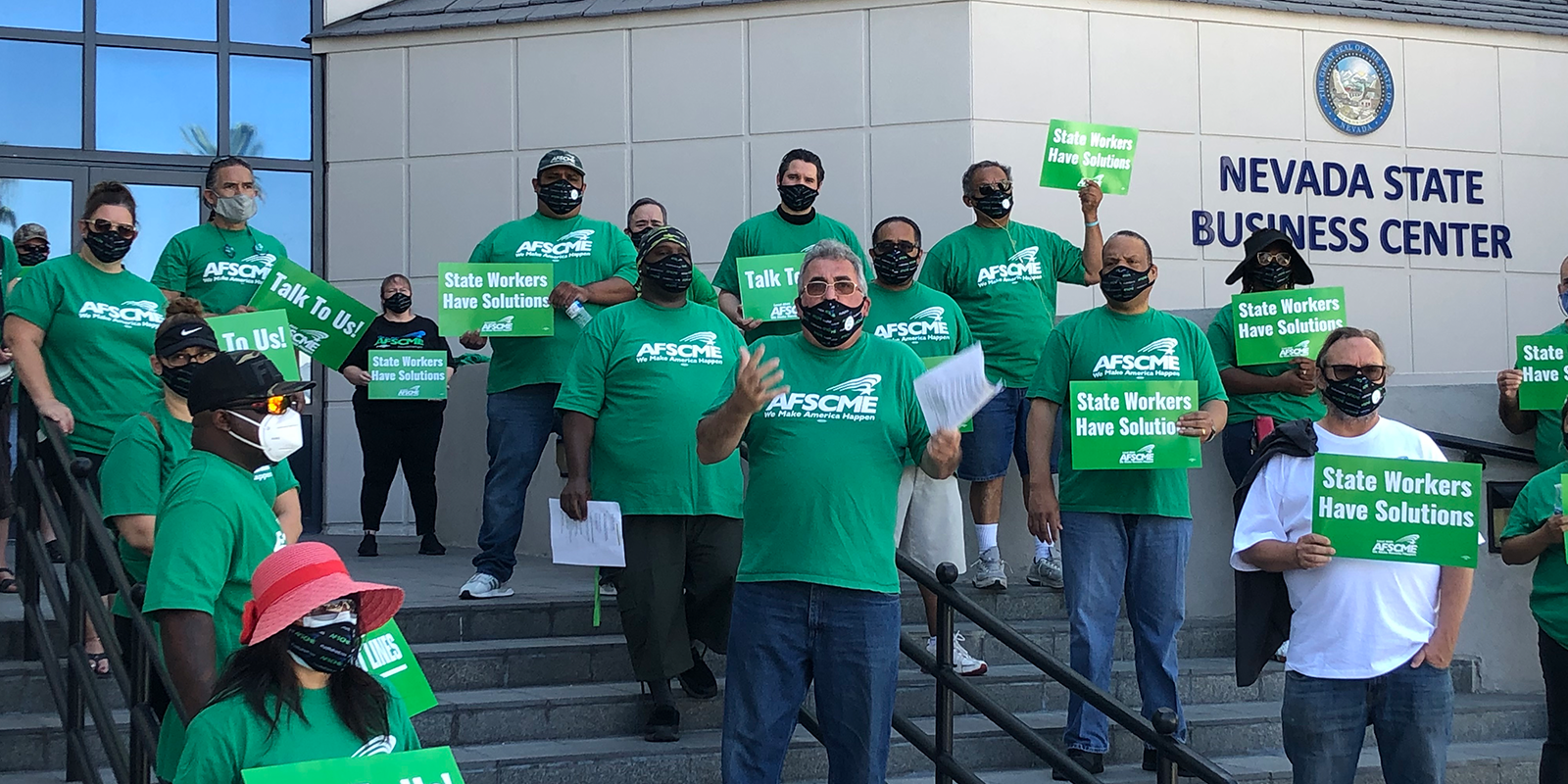 (CARSON CITY, NEVADA) - As the Nevada State Government recently grappled over how to cover a $1.2 billion dollar budget shortfall caused by the COVID-19 Pandemic, Members of American Federation of State, County & Municipal Employees (AFSCME) Local 4041 mobilized to take action against budget cuts that asked them to make the same sacrifices they made during the Great Recession a decade ago - sacrifices they are still recovering from.

In mid-June, Governor Steve Sisolak made a proposal that included once-a-month furloughs, amounting to a 4.6% annual pay cut for Workers - and a year of merit pay freezes for State Employees.

Additionally, 50 State Employees would have been laid off.

Local 4041 Members denounced the plan and demanded the governor negotiate with them over these proposed changes to their working conditions.

AFSCME Members won collective Bargaining Rights for State Employees in 2019 and were eager to take this opportunity to exercise their right to negotiate over changes to their working conditions.

After the Governor refused to bargain over his proposed changes to the 2021 budget, Local 4041 filed an Unfair Labor Practice (ULP).

“It ‘took us years to win our right to collectively bargaining and we have to fight to defend them.’  The Governor ‘must honor this right and initially he didn’t.’  So, Members ‘quickly mobilized to demand we have a say in any changes’ to the budget and our working conditions,” said Harry Schiffman, who serves as President of Local 4041 and works as an Electrician at the University of Nevada in Las Vegas.

In late June, the Local held concurrent rallies in Las Vegas and Carson City, with hundreds more joining to watch on-line, to demand that they be included in the budget process.

Workers also circulated a petition and called the Governor’s Office to demand he talk to them.

On July 8th, the State Legislature convened a special session to make amendments to the Fiscal Year 2021 Budget that began on July 1st.

During the Great Recession, some had lost their homes.

Some had applied for financial assistance through the same program they had had helped other Nevadans navigate.

Legislators then stood up for State Employees and vowed to look for another way.

“By ‘sharing how these cuts would affect our ability to provide for our families and our ability to continue to provide the services our communities need during this pandemic, we were able to change the conversation about how much State Employees can take in cuts, having just lived through devastating cuts for the last twelve years,’” Schiffman said.

Local 4041 Leaders were ultimately able to negotiate with the Governor’s Office.

As a result, furlough days were reduced from 12 days to six - starting in 202 1 and the merit pay increase was preserved.

In addition, 28 layoffs were prevented.

To Continue Reading This Labor News Story, Go To: www.afscme.org/blog/the-power-of-a-union-nevada-state-worker-mobilization-makes-the-difference?fbclid=IwAR04LWU0tbhTkaGcb_2qa5sd3S3kEJq87vJz1EV3G99ozo6vA6RaiqhLGE0