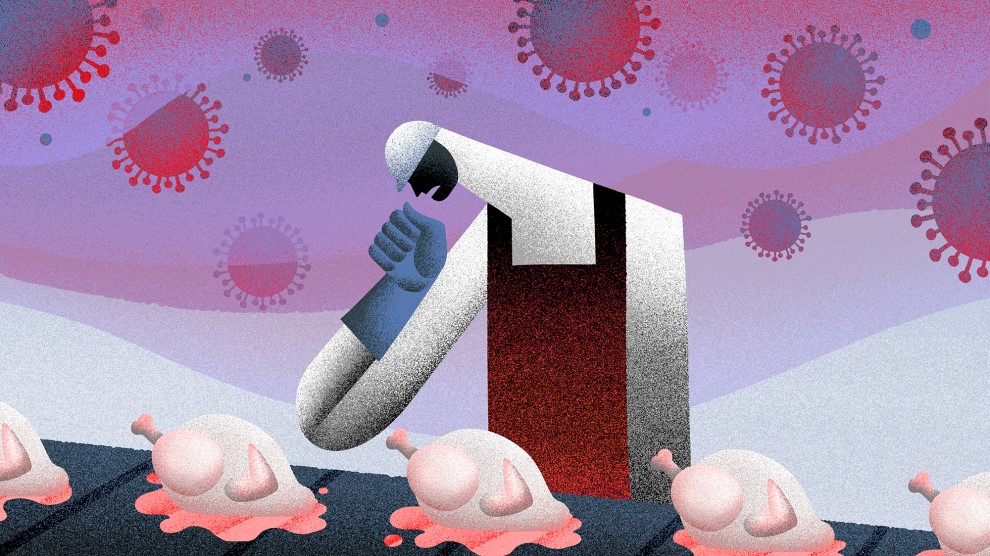 A typical poultry, pork or beef plant employs hundreds of people - by and large Immigrants, Refugees and People of Color - toiling shoulder to shoulder to dismember and break down carcasses moving down the kill line at rates as high as 390 cattle, 1,295 pigs or 10,500 birds per hour.

What spreads inside a meat factory doesn’t stay within its walls.

By late May, rural counties that had meatpacking plants with COVID-19 outbreaks had average infection rates five times higher than the rest of rural America.

As of mid-July, at least 168 Meatpacking Workers had died from the disease.

By the time the pandemic runs its course, he predicts, “everyone will have become infected” at meatpacking plants.

One Federal Agency had the power to do something to protect the nearly 200,000 people who slaughter and package America’s meat.

OSHA, a division of the Department of Labor, is legally obligated to compel employers to provide workplaces “free from recognized hazards that are causing or are likely to cause death or serious physical harm.”

Yet “OSHA is missing in action,” says Debbie Berkowitz, who worked at the agency during the Obama Administration and now advocates Workers’ Rights at the National Employment Law Project (NELP).

In early March, Berkowitz and Labor Advocates - including the National AFL-CIO - urged OSHA to issue a temporary emergency requirement that employers keep their Workers safe from the Coronavirus.

Instead, in late April the agency issued voluntary guidelines - suggesting that plants tweak the alignment of workstations “if feasible” and “consider” making signs to urge Workers to physically distance.

But Scalia’s influence over OSHA extends beyond his Cabinet role.

Decades ago, as a “management side” Labor Lawyer, he led an industry-funded effort to limit OSHA’s efficacy.

Due to his efforts back then, the agency has “had a much harder time getting meatpacking plants to implement safe practices,” Berkowitz says - setting the stage for the COVID-19 meltdown.

During the 1990s, OSHA sought to better regulate grueling workplaces like meatpacking plants by devising rules to protect Employees from common repetitive-stress injuries.

To Continue Reading This Labor News Story, Go To: www.motherjones.com/food/2020/07/labor-eugene-scalia-meatpacking-osha-stress-carpal-tunnel-coronavirus-covid/