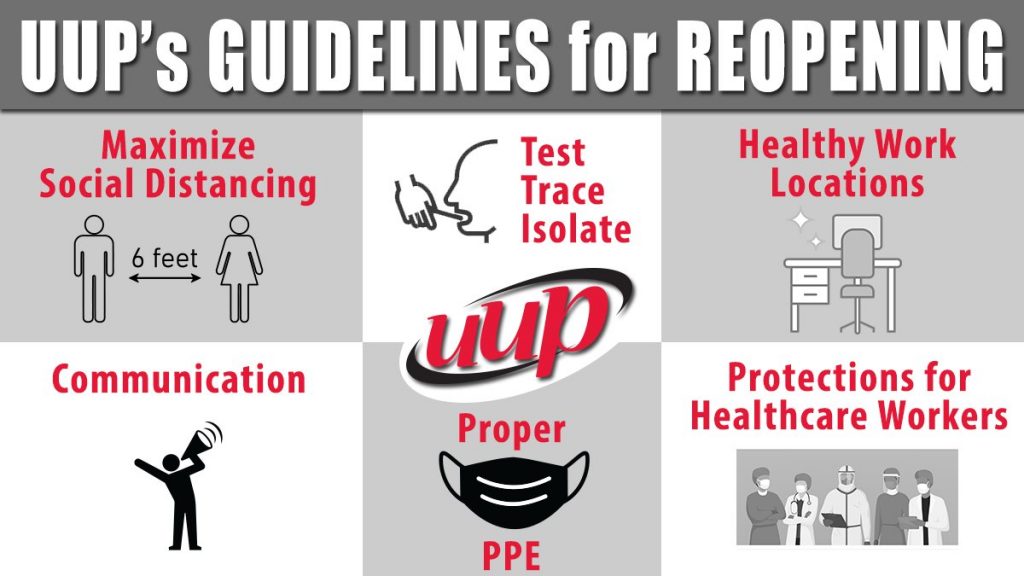 (ALBANY, NEW YORK) – The President of United University Professions (UUP) says the reopening plans being released by individual State of New York (SUNY) Campuses for the Fall Semester do not go far enough to promote safety during the Coronavirus Pandemic, and that UUP believes the New York State should mandate testing, contact tracing and mask-wearing and social distancing in classrooms and common areas.

“At this moment, the health and safety of our students, our Members and our communities ‘are paramount,’” UUP President Fred Kowal said during testimony this week before the state Senate and Assembly Committees on higher education. “Unfortunately, SUNY’s plans ‘do not go far enough to promote safety on campus.’  To ‘safely reopen’ campuses, ‘to spur’ the economy ‘and return to our way of life, we need four basic systems in place: Baseline and surveillance’ testing; Contact tracing; Mask-wearing and social distancing; and tele-commuting ‘to reduce campus density and enhance safety for all.’”

On June 2nd, UUP released its own guidelines to safely reopen campuses, which go much farther than SUNY’s campus reopening plans.

UUP’s guidelines call for face masks to be worn in classrooms and in common areas - not only when students come within six feet of other people.

UUP urged SUNY to use the Union’s guidelines as a basis for working together to develop a system-wide reopening plan that addresses UUP’s concerns.

To date, SUNY has not acknowledged the UUP Guidelines, which Kowal submitted to lawmakers during his testimony (A copy of the UUP reopening plan can be downloaded at https://uupinfo.org/resources/covid19/pdf/UUPReopeningPrinciples.pdf).

Many private colleges in New York have, in contrast to SUNY, developed rigorous plans for baseline and surveillance testing, and “have ‘not resorted to excuses about testing being unnecessary, impossible or too expensive,’” Kowal said. “The students and the Academic and Professional Staff at our campuses ‘should not be compelled to play roulette with possible exposure to asymptomatic spread on campuses, while private colleges recognize and proactively attempt to protect against the possibility.’”

Kowal also told lawmakers that several SUNY Campus Administrations are flouting a tele-commuting agreement with the state that UUP originally established in the Spring, shortly after SUNY shut down its campuses and converted to remote learning.

The tele-commuting agreement, which allows UUP-represented Faculty and Staff to work and teach from home, is in place until October 2nd.

But some Faculty and Staff at several campuses have been told that they must report to work on campus unless they have a compelling health issue or a child care problem, the Union said.