American Federation Of Teachers President Confronts Americas Triple Crisis, Says Nothing Is Off The Table - Including Safety Strikes - If Authorities Fail To Deliver Funding And Safety Amid Virus Surge 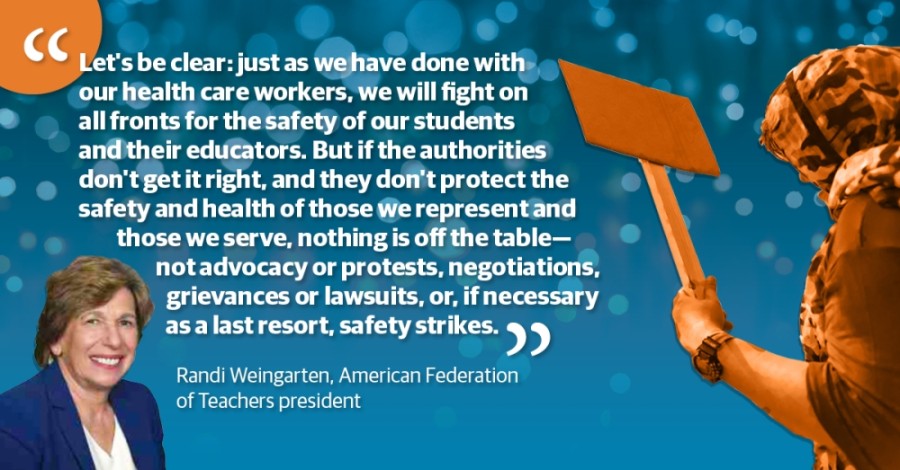 (WASHINGTON, D.C.) - American Federation of Teachers (AFT) President Randi Weingarten laid out an expansive vision to tackle the Nation’s triple crisis in a keynote speech Tuesday (July 28th) to 4,000 delegates meeting virtually at the Union’s Biennial Convention - and she warned that, with schools set to reopen within days, urgent action is needed to keep kids and Teachers safe.

Weingarten’s State of the Union address zeroed in on the three crises facing America - a public health crisis, an economic crisis and a long-overdue reckoning with racism.

She detailed how these crises are being made worse by Republican President Donald Trump and emphasized the urgency of the November Presidential Election, not only to defeat Trump - but to elect Democrat Joe Biden and reimagine America.

“Activism and elections ‘build the power necessary to create a better life, a voice at work and a voice in our Democracy.’  ‘Activism changes the narrative, elections change policy, and, together, they change lives,’” Weingarten said.

Weingarten honored those 200 AFT Members who have died in the line of duty and the hundreds of thousands who have protected, cared for, engaged and fed our communities during the pandemic.

But those efforts have been met with reckless inaction by the Trump Administration, she said, and some state officials who have failed to provide either a plan or adequate resources as community spread has skyrocketed.

While safety and education needs are front and center in many of America’s 16,000 school districts, and states such as New York have curbed the virus and published strong reopening plans, Trump and Education Secretary Betsy DeVos have embraced virus denialism and waged a weeks-long campaign to force reopening with threats and bluster.

In her speech, Weingarten unveiled a resolution passed by the AFT’s 45-Member Executive Council backing locally authorized “Safety Strikes” - on a case-by-case basis and as a last resort - to ensure safety amid the absence of urgency by Federal and some state officials to tackle the Coronavirus surge.

“Let’s be clear,” Weingarten told delegates. “Just as we have done with our Health Care Workers, ‘we will fight on all fronts for the safety of our students and their Educators.’  But if the authorities ‘don’t get it right, and they don’t protect the safety and health of those we represent and those we serve, nothing is off the table - not advocacy or protests, negotiations, grievances or lawsuits, or, if necessary as a last resort, Safety Strikes.’”

Weingarten said the Union’s Members want to return to school buildings for the sake of their kids’ learning - and the well-being of families - but only if conditions are safe.

And that requires planning and hundreds of billions of dollars in resources the Senate and the Trump Administration have refused to provide.

That message is at the center of Reopening School Buildings Safely, an updated AFT plan for reopening that outlines three essential conditions for school buildings to reopen - low infection rates and adequate testing, public health safeguards to help prevent the spread of the virus in schools, and the resources and funding to make it happen.

The Union released its first school reopening plan in April, weeks before the original Centers for Disease Control and Prevention guidance.

To Continue Reading This Labor News Story, Go To: www.aft.org/press-release/aft-president-confronts-americas-triple-crisis-says-nothing-table-if