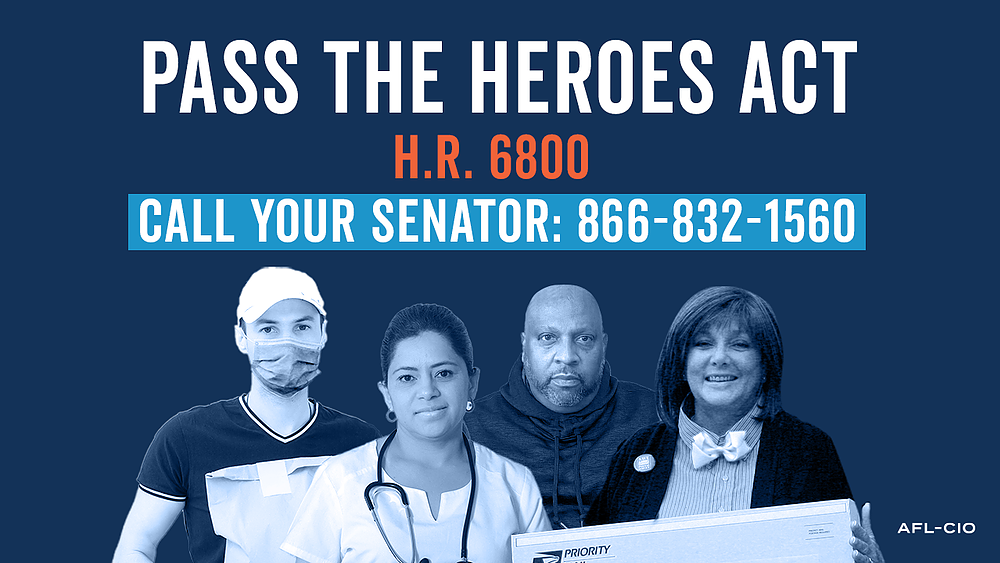 (WASHINGTON, D.C.) - The National AFL-CIO and its Affiliate Labor Unions are condemning Senate Majority Leader Mitch McConnell (Republican-Kentucky) for his body’s failure to pass the HEROES (Health and Economic Recovery Omnibus Emergency Solutions) Act, which is deepening economic hardship for millions, especially those who will lose the additional $600 in Unemployment Insurance Benefits that are set to expire at the end of July.

Meanwhile, McConnell is vowing that no Bill will be voted on by the Senate unless corporations are given sweeping Pandemic Liability Protections.

He is also demanding corporations be given the power to force Workers back to work in unsafe work environments.

If Employees get sick from a company not following basic safety guidelines, the Senate Majority Leader wants to make it difficult to nearly impossible for Workers to sue.

And if an Employee would refuse to return to unsafe working conditions, they would be fired, and not qualify for unemployment.

(To Continue Reading This Portion of This Labor News Story, Go To: www.politicususa.com/2020/07/28/mcconnell-pandemic-relief.html?fbclid=IwAR33x5d9Ha9FmjAHtYLcXtlHu19SdKkUxc9iV8gvl-uoWizfIHiW-cDU_Do)

Meanwhile, millions of laid-off American Workers have relied on these increased weekly Supplemental Benefits for the past several months in order to pay their bills and stay afloat amid the COVID-19 pandemic.

Its termination will have devastating impacts on the economy and America’s Workers.

Responding to the Senate’s failure to act, the Labor Movement has been mobilizing in all 50 states, D.C. and Puerto Rico to pass the HEROES Act.

On June 17th, thousands of Union Members across the Nation took an action of some kind.

This groundswell has only grown as the COVID-19 crisis has worsened in recent weeks.

And just recently, nearly 20,000 calls flooded into Senate offices to demand passage of the HEROES Act, which includes America’s Five Economic Essentials, is the road map to rebuilding America and empowering Working Families.

Senate Republicans on Monday (July 27th) unveiled a COVID-19 Stimulus Proposal that would slash Unemployment Benefits, do nothing to expand Federal Nutrition Aid, provide $0 in new funding for states, and leave the United States Postal Service (USPS) and its Union-Represented Workforce without any additional emergency relief.

While giving short shrift to Workers, the Republican package would provide a sweeping five-year liability shield geared toward protecting businesses from Coronavirus-related lawsuits - a top priority of Senate Majority Leader McConnell and the U.S. Chamber of Commerce.

The GOP plan also includes billions of dollars in funds that are completely unrelated to fighting the Coronavirus Pandemic, such as $686 million for F-35 fighter jets and $1.75 billion for construction of a new FBI Headquarters, which is a pet project of Republican President Donald Trump and would positively impact a hotel he owns just a block away.

When called out on that fact, McConnell apparently had no idea funding for the FBI building was included in the final legislation, which was crafted in his office.