Are You Ready To Fight? - Essential ATU Local 1342 Workers Rally In Downtown Buffalo Before Kicking Off Formal Negotiations With The NFTA On A New Contract That They Say 'Must Recognize Their Worth & Sacrifice' 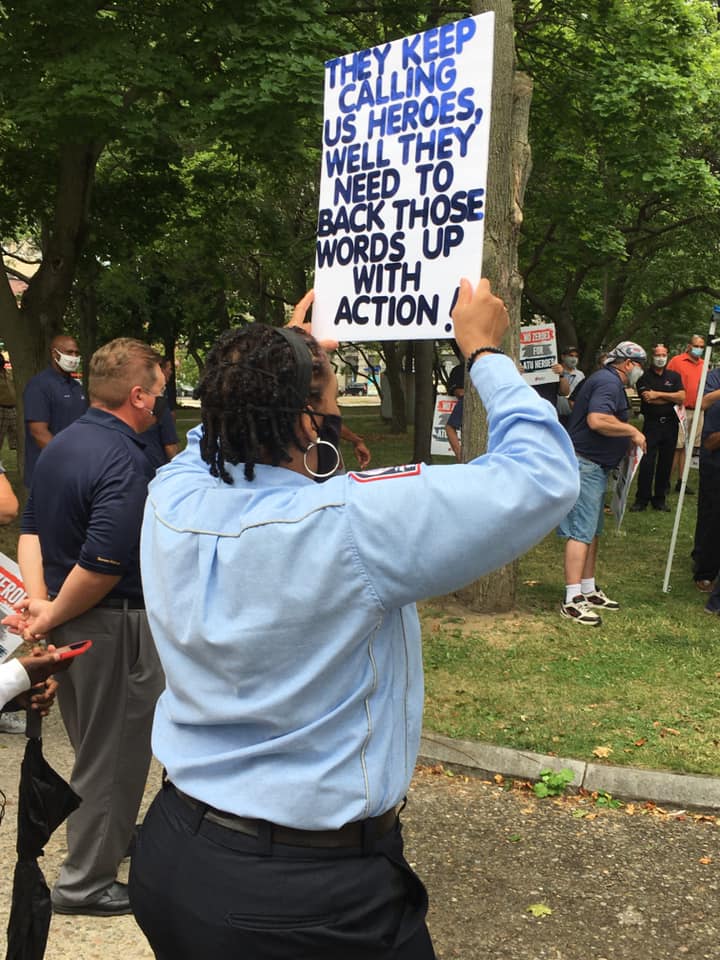 WNYLaborToday.com Editor’s Note: Pictured above, a Member of Amalgamated Transit Union (ATU) Local 1342 holds a sign high above her head that reads: “They Keep Calling Us Heroes, Well They Need to Back Up Those Words Up With Action!,” during a rally held before her Union kicked off formal negotiations with the Niagara Frontier Transportation (NFTA) on a new contract.  (WNYLaborToday.com Photos)

(BUFFALO, NEW YORK) - When they were needed, they were there and have continued to work through the Coronavirus Pandemic, making sure those who ride the Niagara Frontier Transit Authority’s (NFTA) Public Bus System get to where they needed to go, from the grocery store to the hospital.  Praised as Heroes and patted on the back as essential, a variety of NFTA Employees represented by Amalgamated Transit Union (ATU) Local 1342 now want nothing more than to be recognized, valued and paid as such in a new contract agreement.

That’s why as array of ATU Members/NFTA Employees and their Union’s Leadership were joined by ATU Representatives from Rochester, Syracuse and Albany, as well as local Labor Leaders and Union Members, and Elected Officials, to participate in a rally that was held before Local 1342’s first sit-down negotiation with NFTA management on Wednesday (July 29th) in Downtown Buffalo.  The current contract is set to expire on Friday (July 31st).

“Who ‘moves’ this city?  ‘We’ kept this city moving through the pandemic,” Local 1342 President Jeff Richardson (pictured below), a 33-year Member of his Union, told those attending the rally. “I’m ‘proud of you.’  (People) ‘don’t know what we go through on a daily basis.’  There are (82) ATU Members who have died from COVID across this country.  ‘This (disease) is real.’  Are we ‘heroes’ who ‘deserve a fair’ contract?  ‘We need to stand together as one.’  ‘Are you ready to fight?’  ‘Together we fight and together we win.’” 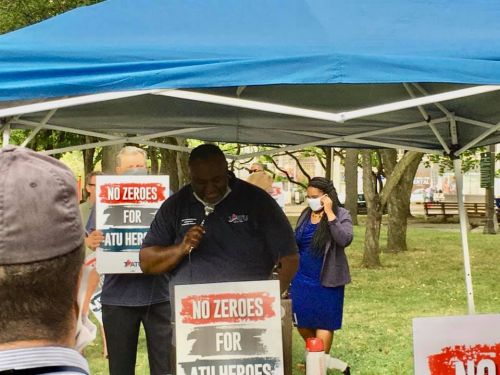 Richardson told WNYLaborToday.com after the rally that 10 of his Members “have tested positive” for the Coronavirus.  Luckily, no one had died, he said.

In addition to receiving heroes’ wages and hazard pay, Richardson - who led a procession of Workers and Supporters through Buffalo’s Bus Terminal that’s operated by the NFTA prior to the negotiating session, told Your On-Line Labor Newspaper: “We ‘also have to have the proper’ Personal Protection Equipment, including masks and shields.  ‘We’re here to fight - with one common goal.’” 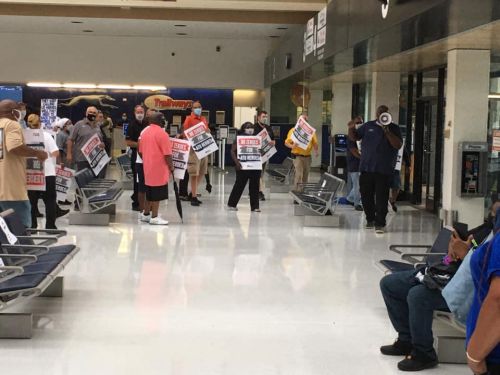 According to those at the rally, that will not happen again.

“Who ‘would have done what you did?’  ‘You kept everything going,’” Buffalo AFL-CIO Central Labor Council President Denise Abbott told those in attendance.  “To ‘each and every one of you - you don’t deserve this.’  There is ‘no protection or guidance coming from the Trump Administration in Washington.’  ‘He let you down.’  ‘Your job needs to be safe.’” 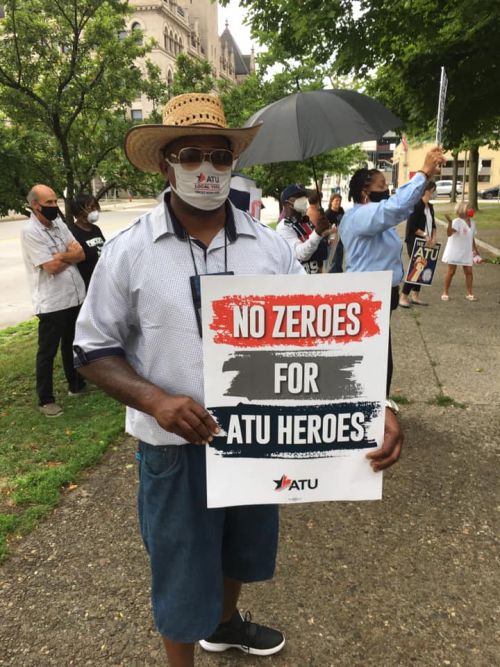 Western New York AFL-CIO Area Labor Federation (WNYALF) President Richard Lipsitz also spoke: “We ‘will stand with you for a for fair contract to the very end, as well as all Front Line and Essential Workers in this struggle.’  There is ‘no road out of this.’  ‘We must defeat Donald Trump in November.’  ‘Now is the time to unite.’” 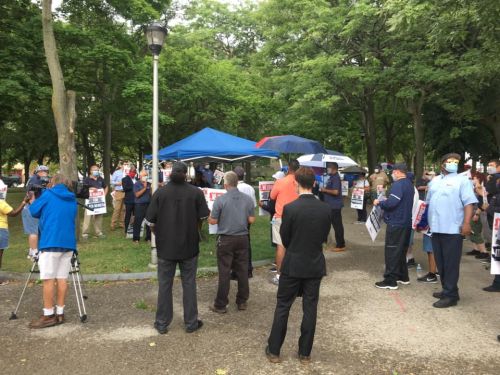 Representatives from ATU Locals in Rochester (Local 282), Syracuse (Local 580) and Albany (Local 1321) were also in attendance at the rally in a show of support for their Union Brothers and Sisters in Buffalo.

“We ‘had’ to come,” Local 282 President Jacques Chapman said.  “While management ‘stayed at home, we worked.’  This virus ‘is going to come back and guess what?’  ‘It’s us who are going to be working.’” 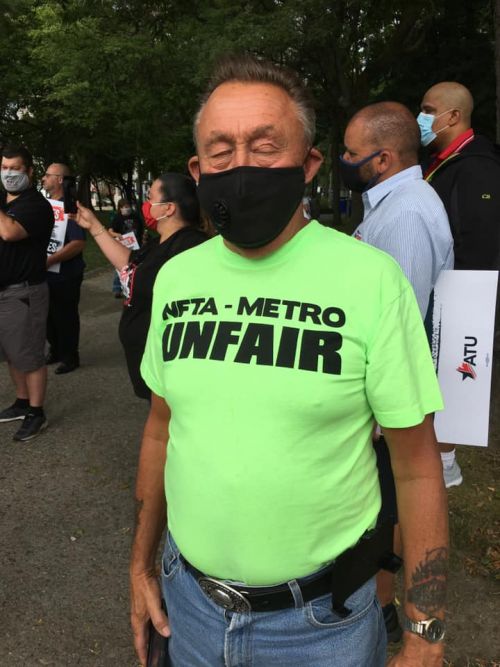 The ATU International Office also send Representative Natalie Cruz to Buffalo to take part in the rally and there was much praise for International President John Costa, whom Richardson said was “fighting on the Federal level to make sure our Members get Hazard Pay and PPE.”

As a Member of ATU Local 1321 in Albany, New York, the struggle is real, the fight is real, everyone one of us have been under so much stress and pressure, that's all from Drivers to Mechanics, Cleaners, Supervisors - all that are in direct contact with the public or just each other. Not knowing from one day to the next - are we gonna make it home? The public is more hostile to us then ever before. We deserve fair pay, a safe working environment, hazard pay and better benefits. As each Local across the State and country is up for contract renewal, the same fight will be heard. All Locals coming together is an amazing experience to have and finally a new way to make a stand for one another. We in Albany we are here for you BUFFALO! Posted by DAWN on July 31, 2020 at 3:46 pm